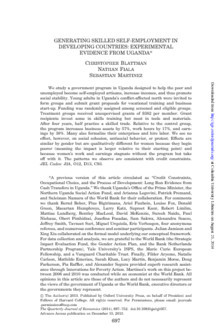 We study a government program in Uganda designed to help the poor and unemployed become self-employed artisans, increase incomes, and thus promote social stability. Young adults in Uganda’s conflict-affected north were invited to form groups and submit grant proposals for vocational training and business start-up. Funding was randomly assigned among screened and eligible groups. Treatment groups received unsupervised grants of $382 per member. Grant recipients invest some in skills training but most in tools and materials. After four years, half practice a skilled trade. Relative to the control group, the program increases business assets by 57%, work hours by 17%, and earnings by 38%. Many also formalize their enterprises and hire labor. We see no effect, however, on social cohesion, antisocial behavior, or protest. Effects are similar by gender but are qualitatively different for women because they begin poorer (meaning the impact is larger relative to their starting point) and because women’s work and earnings stagnate without the program but take off with it. The patterns we observe are consistent with credit constraints. 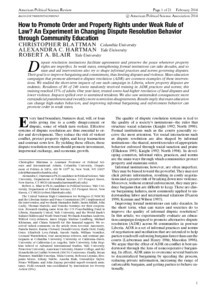 Dispute resolution institutions facilitate agreements and preserve the peace whenever property rights are imperfect. In weak states, strengthening formal institutions can take decades, and so state and aid interventions also try to shape informal practices and norms governing disputes. Their goal is to improve bargaining and commitment, thus limiting disputes and violence. Mass education campaigns that promote alternative dispute resolution (ADR) are common examples of these interventions. We studied the short-term impacts of one such campaign in Liberia, where property disputes are endemic. Residents of 86 of 246 towns randomly received training in ADR practices and norms; this training reached 15% of adults. One year later, treated towns had higher resolution of land disputes and lower violence. Impacts spilled over to untrained residents. We also saw unintended consequences: more extrajudicial punishment and (weakly) more nonviolent disagreements. Results imply that mass education can change high-stakes behaviors, and improving informal bargaining and enforcement behavior can promote order in weak states. 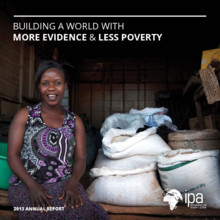 In 2013 IPA celebrated ten years of producing high-quality evidence about what works, and what does not work, to improve the lives of the poor. It was a year of celebration for our accomplishments. More so, it was a time to prepare our organization for the next phase as we continue to pursue our vision of a world with More Evidence and Less Poverty.

View an online version of the report at annualreport.poverty-action.org/2013annualreport/ 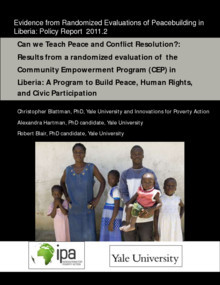 How can new democracies and societies emerging from conflict encourage tolerance and dialogue, strengthen conflict resolution systems, and increase understanding of human rights? 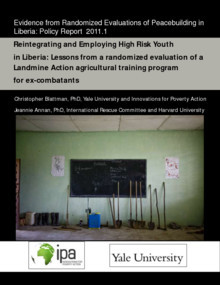 Following the 2011 elections, one of the most pressing challenges for the President, government ministries and international organizations is boosting youth incomes and employment, especially those of high-risk youth. What kinds of programs can boost employment and incomes and reduce the risk of social instability? This report details findings from an impact evaluation of a reintegration and agricultural livelihoods program for high-risk Liberian youth, and draws out lessons for employment policies in 2012 and beyond. 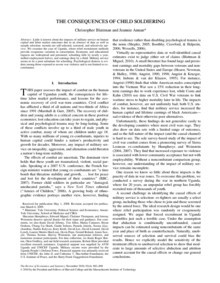 The Consequences of Child Soldiering

Little is known about the impacts of military service on human capital and labor market outcomes due to an absence of data as well as sample selection: recruits are self-selected, screened, and selectively survive. We examine the case of Uganda, where rebel recruitment methods provide exogenous variation in conscription. Economic and educational impacts are widespread and persistent: schooling falls by nearly a year, skilled employment halves, and earnings drop by a third. Military service seems to be a poor substitute for schooling. Psychological distress is evident among those exposed to severe war violence and is not limited to ex-combatants. 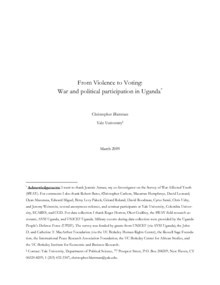 From Violence to Voting: War and Political Participation in Uganda

What is the political legacy of violent conflict? I present evidence for a link from past violence to increased political engagement among ex-combatants. The evidence comes from northern Uganda, where rebel recruitment generated quasi-experimental variation in who was conscripted by abduction. Survey data suggest that abduction leads to substantial increases in voting and community leadership, largely due to elevated levels of violence witnessed. Meanwhile, abduction and violence do not appear to affect non-political participation. These patterns are not easily explained by conventional theories of participation, including mobilization by elites, differential costs, and altruistic preferences. Qualitative interviews suggest that violence may lead to personal growth and political activation, a possibility supported by psychological research on the positive effects of traumatic events. While the generalizability of these results requires more evidence to judge, the findings challenge our understanding of political behavior and point to important new avenues of research. 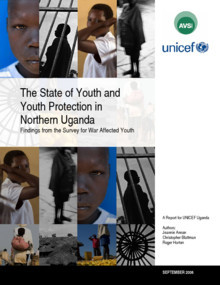 The State of Youth and Youth Protection in Northern Uganda: Findings from the Survey for War-Affected Youth

Youth are simultaneously the primary victims and the primary actors in the two-decade long war in northern Uganda. Yet, while we know that youth have suffered (and continue to do so), we have not been able to answer with confidence or precision some crucial questions, namely: who is suffering, how much, and in what ways? Moreover, while we know that youth have made up the bulk of the armed rebel group, almost always forcibly, we have little sense of the magnitude, incidence, and nature of the violence and trauma.