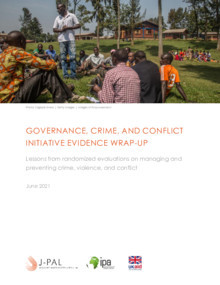 Lessons from randomized evaluations on managing and preventing crime, violence, and conflict

What are the most promising strategies for reducing crime, violence, and conflict? The past decade has seen a dramatic expansion in the experimental literature designed to help answer this question. Moving beyond evaluations of individual programs, increasingly, these studies are striving to test broader hypotheses about how programs work (i.e. what are the key program components driving change) and to generate insights into human behavior (i.e. why individuals may be motivated to act in certain ways).

This evidence review, prepared by staff at the Abdul Latif Jameel Poverty Action Lab (J-PAL) and Innovations for Poverty Action (IPA) ) for the Foreign, Commonwealth and Development Office (FCDO), offers a broad review of the expansion of this literature and seeks to capture some of the emerging insights from across these studies. The review has been prepared as part of J-PAL and IPA’s Governance, Crime and Conflict Initiative, a £15- million investment by FCDO launched in 2017 to produce new research on effective policies to promote peace and good governance, reduce crime, and support individuals and communities recovering from conflict. 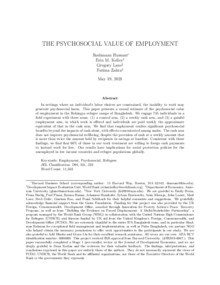 The Psychosocial Value of Employment

In settings where an individual's labor choices are constrained, the inability to work may generate psychosocial harm. This paper presents a causal estimate of the psychosocial value of employment in the Rohingya refugee camps of Bangladesh. We engage 745 individuals in a field experiment with three arms: (1) a control arm, (2) a weekly cash arm, and (3) a gainful employment arm, in which work is o ered and individuals are paid weekly the approximate equivalent of that in the cash arm. We find that employment confers significant psychosocial benefits beyond the impacts of cash alone, with effects concentrated among males. The cash arm does not improve psychosocial wellbeing, despite the provision of cash at a weekly amount that is more than twice the amount held by recipients in savings at baseline. Consistent with these findings, we find that 66% of those in our work treatment are willing to forego cash payments to instead work for free. Our results have implications for social protection policies for the unemployed in low income countries and refugee populations globally. 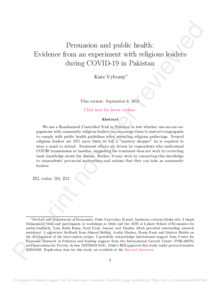 Persuasion and Public Health: Evidence from An Experiment with Religious Leaders during COVID-19 in Pakistan

We use a Randomized Controlled Trial in Pakistan to test whether one-on-one engagement with community religious leaders can encourage them to advise congregants to comply with public health guidelines from state authorities. We test whether religious content in this engagement increases its effectiveness. We find that simple one-on-one engagement significantly improves the advice given by religious leaders to congregants on preventing COVID transmission in the mosque. Engagement was equally effective with or without explicitly religious content. Treatment effects are driven by the subsample who are already convinced of basic information about COVID at baseline, suggesting the treatment does not work by correcting basic knowledge about the disease. Rather, it may work through the effectiveness of one-on-one engagement that reinforces existing knowledge and connects it to actions that respondents can take in their role as community leaders. 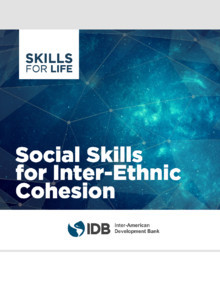 Social skills are essential to building empowered and cohesive communities in ethnic diversity. In a world with massive population movements and growing anti-immigrant sentiments, schools stand out as important platforms to instill key social skills into our children to build inter-ethnic cohesion. Achieving this requires the implementation of rigorously tested educational actions. This brief provides the evaluation results of a particular educational program that was implemented in a high-stakes context where the ethnic composition of schools changed abruptly due to a massive refugee influx. The program significantly lowered peer violence and ethnic segregation in schools and improved prosociality in children. 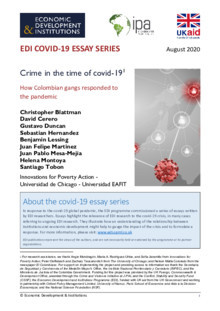 Crime in the Time of COVID-19: How Colombian Gangs Responded to the Pandemic

Since the COVID-19 outbreak, scholars and journalists have spread anecdotes of gangs and criminal organizations coming to the aid of citizens, governing in place of the state. Researchers studied if gangs respond to COVID-19 in Medellín. Despite the headlines, gang involvement in pandemic response is exceptional and mostly idiosyncratic. Surveying every low- and middle-income neighborhood in Medellin, they find that most of the support for civilians comes from state authorities and not from gangs 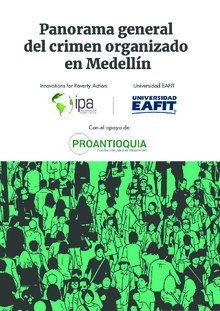 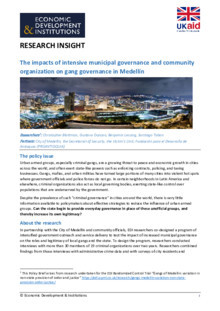 In partnership with the City of Medellín and community officials, EDI researchers co-designed a program of intensified government outreach and service delivery to test the impact of increased municipal governance on the roles and legitimacy of local gangs and the state. To design the program, researchers conducted interviews with more than 30 members of 19 criminal organizations over two years. Researchers combined findings from those interviews with administrative crime data and with surveys of city residents and businesses to learn about the organization and political economy of organized crime in Medellín. This EDI Policy Brief provides a summary of those findings to date 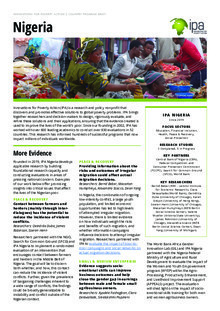 Founded in 2019, IPA Nigeria develops applicable research by building foundational research capacity and conducting evaluations in areas of pressing national concern. Examples of our work in this brief offer promising insights into critical issues that affect the lives of the Nigerian poor. 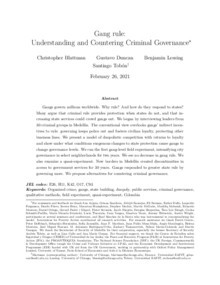 Gangs govern millions worldwide. Why rule? And how do they respond to states? Many argue that criminal rule provides protection when states do not, and that increasing state services could crowd gangs out. We began by interviewing leaders from 30 criminal groups in Medellín. The conventional view overlooks gangs’ indirect incentives to rule: governing keeps police out and fosters civilian loyalty, protecting other business lines. We present a model of duopolistic competition with returns to loyalty and show under what conditions exogenous changes to state protection cause gangs to change governance levels. We run the first gang-level field experiment, intensifying city governance in select neighborhoods for two years. We see no decrease in gang rule. We also examine a quasi-experiment. New borders in Medellín created discontinuities in access to government services for 30 years. Gangs responded to greater state rule by governing more. We propose alternatives for countering criminal governance. 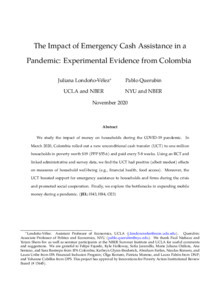 The Impact of Emergency Cash Assistance in a Pandemic: Experimental Evidence from Colombia

Researchers study the impact of money on households during the COVID-19 pandemic. In March 2020, Colombia rolled out a new unconditional cash transfer (UCT) to one million households in poverty worth $19 (PPP $55.6) and paid every 5-8 weeks. Using an RCT and linked administrative and survey data, they find the UCT had positive (albeit modest) effects on measures of household well-being (e.g., financial health, food access). Moreover, the UCT boosted support for emergency assistance to households and firms during the crisis and promoted social cooperation. Finally, they explore the bottlenecks in expanding mobile money during a pandemic. 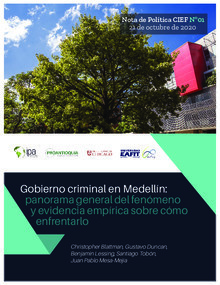 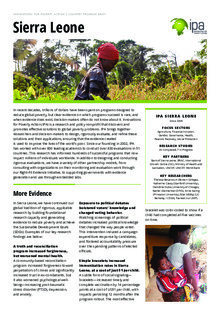 In Sierra Leone, we have continued our global tradition of rigorous, applicable research by building foundational research capacity and generating evidence to reduce poverty and achieve the Sustainable Development Goals (SDGs). Examples of our key research findings are outlined in this brief. 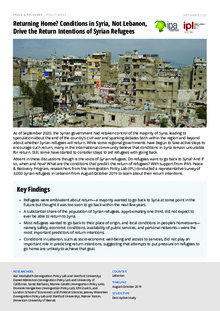 As of September 2020, the Syrian government had retaken control of the majority of Syria, leading to speculation about the end of the country’s civil war and sparking debates both within the region and beyond about whether Syrian refugees will return. While some regional governments have begun to take active steps to encourage such return, many in the international community believe that conditions in Syria remain unsuitable for return. Still, some have started to consider steps to aid refugees with going back.

Absent in these discussions though is the voice of Syrian refugees. Do refugees want to go back to Syria? And if so, when and how? What are the conditions that predict the return of refugees? With support from IPA’s Peace & Recovery Program, researchers from the Immigration Policy Lab (IPL) conducted a representative survey of 3,000 Syrian refugees in Lebanon from August-October 2019 to learn about their return intentions. 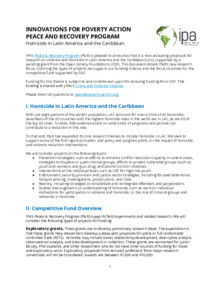 Peace & Recovery Program: Homicide in Latin America and the Caribbean

IPA’s Peace & Recovery Program (P&R) is pleased to announce that it is now accepting proposals for research on violence and homicide in Latin America and the Caribbean (LAC), supported by a pending grant from the Open Society Foundations (OSF). This document details P&R’s new research focus, outlining the types of projects we support, our funding criteria, and the focus countries for the competitive fund supported by OSF.

Funding for this theme is subject to and conditioned upon IPA receiving funding from OSF. This funding is shared with J-PAL’s Crime and Violence Initiative (CVI).

Please direct all questions to peace@poverty-action.org. 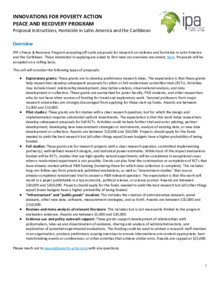 Peace and Recovery Program Application Instructions: Homicide in Latin America and the Caribbean

This document provides application instructions for the Peace & Recovery (P&R) Program's request for off-cycle proposals on homicide reduction in Latin America and the Caribbean. The application process contains the following templates for applicants to complete when submitting their applications:

For more information about this request for proposals, please see this overview document.