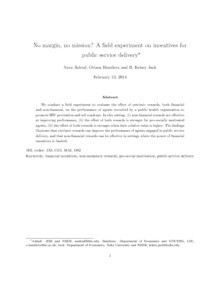 No margin, no mission? A Field experiment on incentives for public service delivery

We conduct a field experiment to evaluate the effect of extrinsic rewards, both financial and non-financial, on the performance of agents recruited by a public health organization to promote HIV prevention and sell condoms. In this setting: (i) non-financial rewards are effective at improving performance; (ii) the effect of both rewards is stronger for pro-socially motivated agents; (iii) the effect of both rewards is stronger when their relative value is higher. The findings illustrate that extrinsic rewards can improve the performance of agents engaged in public service delivery, and that non-financial rewards can be effective in settings where the power of financial incentives is limited. 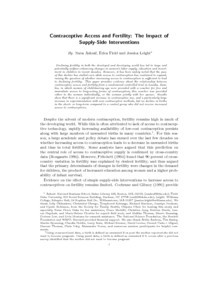 Contraceptive Access and Fertility: The Impact of Supply-Side Interventions

Declining fertility in both the developed and developing world has led to large and potentially welfare-enhancing changes in women’s labor supply, education and investment in children in recent decades. However, it has been widely noted that the pace of this decline has stalled even while access to contraception has continued to expand, raising the question of whether increasing access to contraception is sufficient to lead to declining fertility. This paper provides evidence about the relationship between contraceptive access and fertility from a randomized controlled trial in Lusaka, Zambia, in which women of child-bearing age were provided with a voucher for free and immediate access to long-acting forms of contraception; this voucher was provided either to the woman individually, or the woman jointly with her spouse. Results show that there is a significant increase in contraceptive use, and a particularly large increase in experimentation with new contraceptive methods, but no decline in births in the short- or long-term compared to a control group who did not receive increased access to contraceptives. 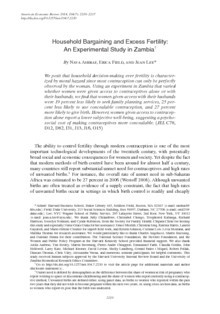 Household Bargaining and Excess Fertility: An Experimental Study in Zambia

We posit that household decision-making over fertility is characterized by moral hazard since most contraception can only be perfectly observed by the woman. Using an experiment in Zambia that varied whether women were given access to contraceptives alone or with their husbands, we find that women given access with their husbands were 19 percent less likely to seek family planning services, 25 percent less likely to use concealable contraception, and 27 percent more likely to give birth. However, women given access to contraception alone report a lower subjective well-being, suggesting a psycho-social cost of making contraceptives more concealable. 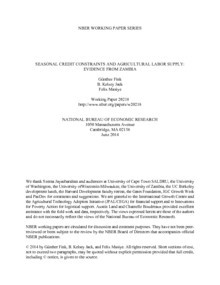 Small-scale farming remains the primary source of income for a majority of the population in developing countries. While most farmers primarily work on their own fields, off-farm labor is common among small-scale farmers. A growing literature suggests that off-farm labor is not the result of optimal labor allocation, but is instead driven by households' inability to cover short-term consumption needs with savings or credit. We conduct a field experiment in rural Zambia to investigate the relationship between credit availability and rural labor supply. We find that providing households with access to credit during the growing season substantially alters the allocation of household labor, with households in villages randomly selected for a loan program selling on average 25 percent less off-farm labor. We also find that increased credit availability is associated with higher consumption and increases in local farming wages. Our results suggest that a substantial fraction of rural labor supply is driven by short-term constraints, and that access to credit markets may improve the efficiency of labor allocation overall. 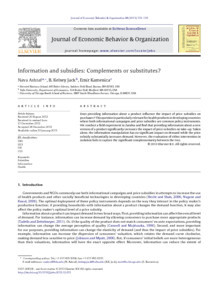 Information and Subsidies: Complements or Substitutes? 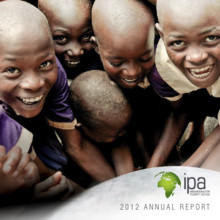