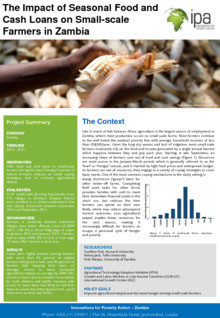 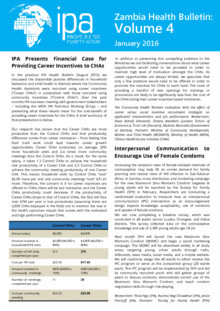 In the previous IPA Health Bulletin (August 2015) we discussed the discernible positive differences in household behaviors and child health in districts where the Community Health Assistants were recruited using career incentives (“Career CHAs”) in comparison with those recruited using community incentives (“Control CHAs”). Over the past months IPA has been meeting with government stakeholders - including the MOH HR Technical Working Group - and presenting what these results mean for the cost-benefit of providing career incentives for the CHAs. Here is a brief summary of that presentation. 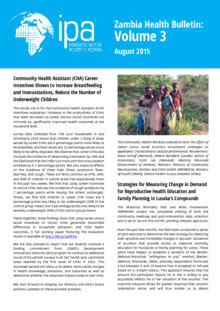 The results are in for the Community Health Assistant (CHA) incentives evaluation: increases in the productivity of CHAs that were recruited via career (versus social) incentives are mirrored by significantly improved health outcomes at the household level. 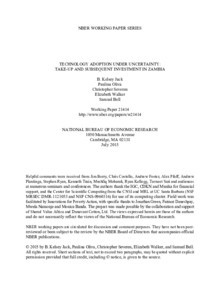 Technology Adoption under Uncertainty: Take-Up and Subsequent Investment in Zambia

Many technology adoption decisions are made under uncertainty about the costs or benefits of subsequent investments in the technology after the initial take-up. As new information is realized, agents may prefer to abandon a technology that appeared profitable at the time of take-up. Low rates of follow-through (engagement in subsequent investments) are particularly problematic when subsidies are used to increase adoption, in part because they may attract users with a lower value for the technology. We use a field experiment with two stages of randomization to generate exogenous variation in the payoffs associated with taking up and following through with a new technology: a tree species that provides private fertilizer benefits to adopting farmers. Our empirical results show high rates of abandoning the technology, even after paying a positive price to take it up. The experimental variation offers a novel source of identification for a structural model of intertemporal decision making under uncertainty. Estimation results indicate that the farmers experience idiosyncratic shocks to net payoffs after take-up, which increase take-up but lower average per farmer tree survival. We simulate counterfactual outcomes under different levels of uncertainty and observe that subsidizing take-up of the technology affects the composition of adopters only when the level of uncertainty is relatively low. Thus, uncertainty provides an additional explanation for why many subsidized technologies may not be utilized even when take-up is high. 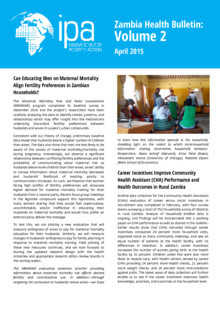 The Zambia Health Bulletin is designed to keep stakeholders and partners informed of on-going research in the Zambian health sector. 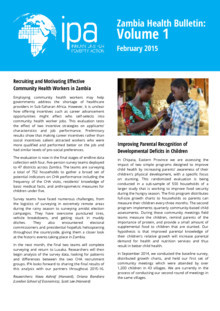