Cognitive behavioral therapy (CBT) may be an effective mental health approach for people living in poverty, who are especially vulnerable to mental distress and face unique demands on their mental “bandwidth.” Researchers worked with Innovations for Poverty Action and the University of Ghana Medical School to design, implement, and conduct a randomized evaluation of the impacts of a group CBT curriculum on low-income individuals in rural Ghana. CBT improved participants’ mental and physical well-being, socio-emotional and cognitive skills, and economic outcomes two to three months later. Results held true whether participants had reported mental distress before the program or not, suggesting that CBT has the potential to address both mental health vulnerability and participants’ mental bandwidth regardless of mental health status.

People living in poverty can be uniquely vulnerable to mental health difficulties for several reasons. First, poverty entails increased vulnerability from unexpected negative “shocks” like disease, drought, or the sudden loss of a source of income, and evidence suggests that negative economic shocks can have corresponding negative impacts on people’s mental health.[1] Second, evidence suggests that the conditions of poverty are uniquely taxing on mental resources, with the amount of mental “bandwidth” spent on dealing with short-term economic problems reducing cognitive resources for making decisions in other realms.[2] In turn, mental health care may provide meaningful benefits for low-income populations.

Cognitive behavioral therapy (CBT) is a common clinical approach to mental health that aims to improve a wide range of harmful beliefs and behaviors by addressing thought patterns. For instance, a counselor using CBT might help a patient understand when they are “catastrophizing” (mentally overemphasizing small problems) and propose strategies to “disrupt” this pattern of thinking in favor of ones that are better for the patient’s mental well-being. If people living in poverty are especially vulnerable to mental distress, this strategy may be particularly impactful for improving mental health in poor communities. It may also address the problem of limited “bandwidth” that can occur regardless of mental distress, resulting in improved decision-making and economic outcomes. Most of past evidence on CBT’s impact on mental health or economic outcomes, however, comes from studies with exclusively participants who have a common mental health-related difficulty.[3]

This evaluation took place in rural communities in the Northern, Upper East, Ashanti, Bono, and Bono East regions of Ghana. The evaluation was done in conjunction with the Graduating the Ultra Poor in Ghana project, but concluded before the announcement and implementation of that project’s other interventions, allowing the CBT program’s impacts to be considered in isolation. Participants in the overall “Graduation” study were substantially more likely to live on less than $1.25 per day than Ghana’s population as a whole at the beginning of the project. Innovations for Poverty Action (IPA), Heifer International, and local government officials selected communities to participate in the broader study if they had over 50 compounds (groups of dwellings), adequate road accessibility for project staff, and did not have a program similar to the Graduation program already in operation.

Low-income individuals in this context were vulnerable to psychological distress: 55 percent of study participants reporting symptoms associated with some degree of psychological distress prior to the evaluation. These levels of distress also varied over time, with 43 percent of individuals who initially reported no distress then reporting some form of distress three months later (without receiving any program).

In Ghana, researchers partnered with IPA to design and implement a group CBT curriculum and evaluate its impacts on participants living in extreme poverty who were identified through the broader “Graduation” economic program.

The curriculum was specifically designed for, and was run by, recent Ghanaian college graduates with a degree in psychology or a related field, but no further qualifications, through the University of Ghana Medical School’s Psych Corps Ghana program. All counsellors received two weeks of classroom training, and performed one week of practice sessions, prior to the start of the program.

Participants received weekly group counselling sessions for 12 weeks. Each session lasted 90 minutes, was held with a group of ten participants, and took place in the participants’ home communities. Sessions involved a mixture of counselors introducing concepts, participants discussing hypothetical scenarios, and thinking about how to apply CBT tools to their own lives. Participants also completed homework assignments in between each session. The sessions were grouped around four distinct modules: healthy thinking; solving problems at home and at work; managing relationships; and goal-setting and goal-directed behavior.

To evaluate the impact of the curriculum, the research team divided randomly divided the 258 participating communities into three groups:

Researchers measured the impacts of CBT by comparing individuals that only received CBT with individuals that received no intervention at all across all three groups. After an initial survey before the intervention, researchers conducted a follow-up survey two to three months after the CBT curriculum concluded to measure its impacts on participants’ mental health, physical health, mental “bandwidth” as reflected through socioemotional skills and cognitive skills, and economic outcomes.

In addition to receiving ethical review and approvals from institutional review boards, researchers made efforts to address and account for ethical questions by implementing protocols for responding to sensitive issues and distress that emerged during or as a result of the CBT sessions. In particular, anyone identified in surveys as in distress was directed to the community psychiatric nurse for help regardless of which arm they were randomized into. In addition, participants were not required to attend CBT sessions, and there was no consequence to them for non-attendance. For more on the researchers’ discussion of ethical considerations, see the original research paper, Appendix D, pg. 28.

Overall, CBT reduced participants’ psychological distress, improved their self-reported mental and physical health, increased their mental “bandwidth”, and improved their short-term economic well-being. The results held true whether participants had reported mental distress at the beginning of the evaluation or not, suggesting that CBT can broadly improve outcomes in poor communities by addressing both vulnerability to deteriorating mental health and limits to mental “bandwidth.”

Results did not differ by gender.

These results suggest CBT can have positive impacts when delivered to a general population, for both members experiencing mental distress and those who are not.

Participants experienced positive impacts on mental and physical health, cognitive skills, and socio-emotional skills whether they reported mental health distress before the CBT program began or not. The research team also developed a tool to measure participants’ vulnerability to future mental health distress and found that the results of the CBT program were larger for those predicted to be more vulnerable. This result suggests, when it comes to mental health, that CBT was able not only to address people actively experience mental health difficulties, but also to preemptively alleviate them. 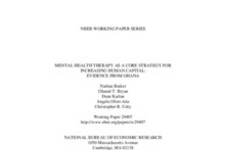