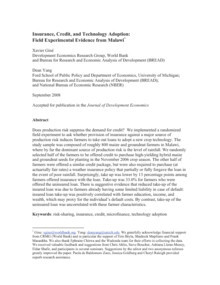 Does production risk suppress the demand for credit? We implemented a randomized field experiment to ask whether provision of insurance against a major source of production risk induces farmers to take out loans to adopt a new crop technology. The study sample was composed of roughly 800 maize and groundnut farmers in Malawi, where by far the dominant source of production risk is the level of rainfall. We randomly selected half of the farmers to be offered credit to purchase high-yielding hybrid maize and groundnut seeds for planting in the November 2006 crop season. The other half of farmers were offered a similar credit package, but were also required to purchase (at actuarially fair rates) a weather insurance policy that partially or fully forgave the loan in the event of poor rainfall. Surprisingly, take up was lower by 13 percentage points among farmers offered insurance with the loan. Take-up was 33.0% for farmers who were offered the uninsured loan. There is suggestive evidence that reduced take-up of the insured loan was due to farmers already having some limited liability in case of default: insured loan take-up was positively correlated with farmer education, income, and wealth, which may proxy for the individual’s default costs. By contrast, take-up of the uninsured loan was uncorrelated with these farmer characteristics.