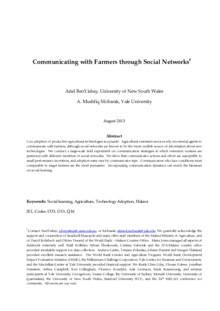 Communicating with Farmers through Social Networks
Low adoption of productive agricultural technologies is a puzzle. Agricultural extension services rely on external agents to communicate with farmers, although social networks are known to be the most credible source of information about new technologies. We conduct a large-scale field experiment on communication strategies in which extension workers are partnered with different members of social networks. We show that communicator actions and effort are susceptible to small performance incentives, and adoption rates vary by communicator type. Communicators who face conditions most comparable to target farmers are the most persuasive. Incorporating communication dynamics can enrich the literature on social learning.
Authors:
Ariel BenYishay, Mushfiq Mobarak
Country:
Malawi
Program area:
Agriculture
Topics:
Food Security, Technology Adoption
Type:
Working Paper
August 30, 2013 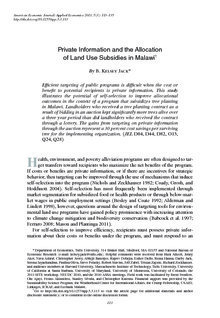 Private Information and the Allocation of Land Use Subsidies in Malawi

Efficient targeting of public programs is difficult when the cost or bene!t to potential recipients is private information. This study illustrates the potential of self-selection to improve allocational outcomes in the context of a program that subsidizes tree planting in Malawi. Landholders who received a tree planting contract as a result of bidding in an auction kept significantly more trees alive over a three year period than did landholders who received the contract through a lottery. The gains from targeting on private information through the auction represent a 30 percent cost savings per surviving tree for the implementing organization.

Learning from Others’ HIV Testing: Updating Beliefs and Responding to Risk

An individual who takes an HIV test can be informed about their own status and risk. Similarly, when friends, family or neighbors learn of a person's HIV status, they may update their beliefs about HIV infection among people they know. Using an experiment conducted in rural Malawi which randomly assigned incentives to learn HIV results, we find that as people in the community learn their HIV results, individuals revise their beliefs downward about deaths attributable to HIV/AIDS. We find corresponding behavioral responses with a significant decrease in condom use and no significant increase in multiple partnerships among those who are HIV-negative. 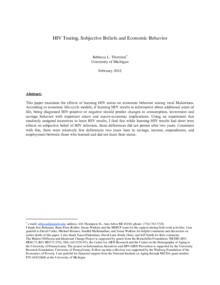 This paper examines the effects of learning HIV status on economic behavior among rural Malawians. According to economic life-cycle models, if learning HIV results is informative about additional years of life, being diagnosed HIV-positive or negative should predict changes in consumption, investment and savings behavior with important micro and macro-economic implications. Using an experiment that randomly assigned incentives to learn HIV results, I find that while learning HIV results had short term effects on subjective belief of HIV infection, these differences did not persist after two years. Consistent with this, there were relatively few differences two years later in savings, income, expenditures, and employment between those who learned and did not learn their status. 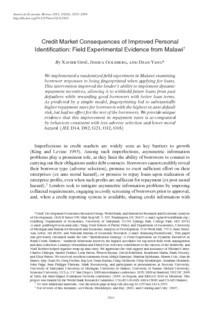 We implemented a randomized field experiment in Malawi examining borrower responses to being fingerprinted when applying for loans. This intervention improved the lender’s ability to implement dynamic repayment incentives, allowing it to withhold future loans from past defaulters while rewarding good borrowers with better loan terms. As predicted by a simple model, fingerprinting led to substantially higher repayment rates for borrowers with the highest ex ante default risk, but had no effect forthe rest of the borrowers. We provide unique evidence that this improvement in repayment rates is accompanied by behaviors consistent with less adverse selection and lower moral hazard. 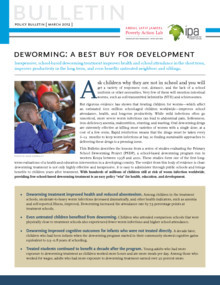 Deworming: A Best Buy for Development

Inexpensive, school-based deworming treatment improves health and school attendance in the short term, improves productivity in the long term, and even benefits untreated neighbors and siblings.