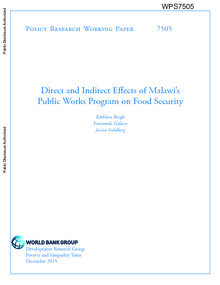 Labor-intensive public works programs are important social protection tools in low- income settings, intended to supplement the income of poor households and improve public infrastructure. In this evaluation of the Malawi Social Action Fund, an at- scale, government-operated program, across- and within-village randomization is used to estimate effects on food security and use of fertilizer. There is no evidence that the program improves food security, and suggestive evidence of negative spillovers to untreated households. These disappointing results hold even under modifications to the design of the program to offer work during the lean rather than harvest season or increase the frequency of payments. 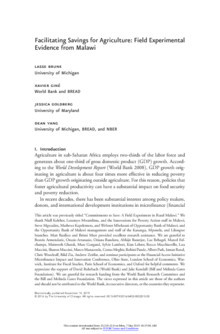 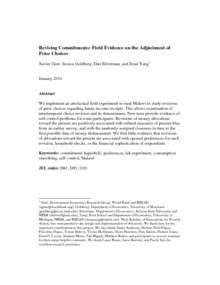 Revising Commitments: Field Evidence on the Adjustment of Prior Choices

We implement an artefactual field experiment in rural Malawi to study revisions of prior choices regarding future income receipts. This allows examination of intertemporal choice revision and its determinants. New tests provide evidence of self-control problems for some participants. Revisions of money allocations toward the present are positively associated with refined measures of present-bias from an earlier survey, and with the randomly assigned closeness in time to the first possible date of money disbursement. We find little evidence that revisions of allocations toward the present are associated with spousal preferences for such revision, household shocks, or the financial sophistication of respondents. 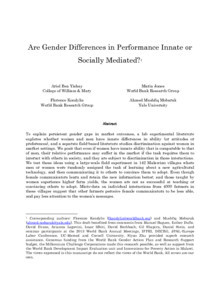 Are Gender Differences in Performance Innate or Socially Mediated?
To explain persistent gender gaps in market outcomes, a lab experimental literature explores whether women and men have innate differences in ability (or attitudes or preferences), and a separate field-based literature studies discrimination against women in market settings. We posit that even if women have innate ability that is comparable to that of men, their relative performance may suffer in the market if the task requires them to interact with others in society, and they are subject to discrimination in those interactions. We test these ideas using a large-scale field experiment in 142 Malawian villages where men or women were randomly assigned the task of learning about a new agricultural technology, and then communicating it to others to convince them to adopt. Even though female communicators learn and retain the new information better, and those taught by women experience higher farm yields, the women are not as successful at teaching or convincing others to adopt. Micro-data on individual interactions from 4000 farmers in these villages suggest that other farmers perceive female communicators to be less able, and pay less attention to the women’s messages.
Authors:
Florence Kondylis, Mushfiq Mobarak, Ariel BenYishay, Maria Jones
Country:
Malawi
Program area:
Agriculture
Topics:
Food Security, Women & Girls
Type:
Working Paper
November 18, 2015 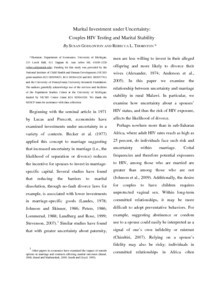 Beginning with the seminal article in 1971 by Lucas and Prescott, economists have examined investments under uncertainty in a variety of contexts. Becker et al. (1977) applied this concept to marriage suggesting that increased uncertainty in marriage (i.e., the likelihood of separation or divorce) reduces the incentive for spouses to invest in marriagespecific capital. Several studies have found that reducing the barriers to marital dissolution, through no-fault divorce laws for example, is associated with lower investments in marriage-specific goods (Landes, 1978; Johnson and Skinner, 1986; Peters, 1986; Lommerud, 1988; Lundberg and Rose, 1999; Stevenson, 2007).1 Similar studies have found that with greater uncertainty about paternity, 1 Other papers in economics have examined the impact of outside options in marriage and contracts affecting marital outcomes (Rasul, 2006; Rasul and Mathoushek, 2008; South and Lloyd, 1995). men are less willing to invest in their alleged offspring and more likely to divorce their wives (Alexander, 1974; Anderson et al., 2005). In this paper we examine the relationship between uncertainty and marriage stability in rural Malawi. In particular, we examine how uncertainty about a spouses’ HIV status, and thus the risk of HIV exposure, affects the likelihood of divorce. 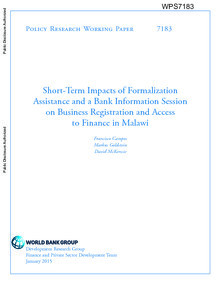