The Psychosocial Value of Employment in Refugee Camps

Rohingya refugees in Bangladesh are severely limited by regulations outlawing formal work, in addition to movement restrictions that limit access to nearby informal work, potentially contributing to poor mental health outcomes. This randomized evaluation examined the effects of employment on psychosocial wellbeing and found that employment delivers significant psychosocial wellbeing, particularly among men. Moreover, a weekly cash provision of equal value did not improve psychosocial wellbeing, and 66 percent of those who worked were willing to forego cash payments for working. The results can be used to inform social protection policies for the unemployed in low income countries and refugee populations globally.

By the end of 2020, a record 82.4 million people were forcibly displaced as a result of conflict, persecution, or violence. Developing countries bear a disproportionately large responsibility to host refugees, despite having limited resources to respond to both the needs of refugees and host communities. In turn, refugees face significant barriers to social and economic integration in their host countries.

Crisis response programming typically focuses on short-term needs related to food, shelter, education, and health, with less focus on long-term prospects such as employment. How do refugees who fled extreme and wanton violence committed against themselves and their families respond to short-term employment activity? How does employment impact their psychosocial wellbeing, and how does it affect their expectations regarding skills building for future, longer-term employment?

In general, little is known about individuals’ psychosocial responses to employment, apart from the effect of income. Furthermore, existing research on meaningful work is observational and largely focused on workers in white-collar jobs in developed countries. This study generates evidence about the psychosocial impacts of employment, which can enhance programming around workforce development and skills training, among other areas. Within the refugee context, research on the effects of productive activity on mental and financial wellbeing can inform aid agencies’ and host governments’ policies to address refugees’ psychosocial wellbeing and has the potential to influence long-term socioeconomic integration.

This study focused on Rohingya refugees who were forcibly displaced from Myanmar and are now living in refugee camps in Cox’s Bazar, Bangladesh. They are substantially limited by regulations outlawing formal work, in addition to movement restrictions that limit access to informal work in urban centers near the camps. Working-age refugees spend long amounts of time sitting idle, potentially manifesting in profound mental health challenges and exacerbated for those who experienced trauma from the Myanmar genocide.

This research, which took place in three refugee camps, sought to understand the effects of employment on psychosocial wellbeing, and further investigated how past trauma and future uncertainty might be mediated by such employment.

This study measured the psychosocial effects of employment among 745 refugees, within a context of widespread idleness in refugee camps. To be eligible to participate in the study, individuals had be without work in the last 14 days; aged 18-45; able and willing to work for two months; not the majhi1 or a member of the majhi’s household; and not a recipient of remittances from abroad.

One-hundred and forty nine blocks (with five participants each) were randomly selected to one of three groups:

The research team informed participants of both the randomization process and assignments. The work offered was designed to be easily completed by women or men of any literacy level and working age within the study population. It was further designed to occupy the employee multiple times throughout the course of the day in a manner that required some nominal level of engagement with individuals outside the home and possessed a clear objective.

Within the employment group , researchers further randomized workers into either receiving a set schedule of work days or not in order to vary the degree of certainty workers had about their near future.

The study found that employment generated significant psychosocial benefits--at a magnitude four times greater than cash alone--relative to the comparison groups. Along a mental health index (a composite measure of depression, stress, life satisfaction, self worth, sociability, locus of control, and sense of stability), employed individuals were 11 percent less likely to be depressed and 21 percent less likely to be moderately or severely depressed. Individuals were also significantly less likely to feel physically ill, perform better on simple memory and math tests, and were less risk averse.

Study participants made decisions about their own labor provision consistent with the estimated non-monetary psychosocial benefits of employment. Specifically, the majority of individuals (69 percent) were willing to work an additional week for zero pay. Among these individuals, 77 percent were willing to forgo at least 200 BDT (approximately $2.50, and greater than the average savings at the project’s baseline) to continue working for free. Taken together, these findings suggest sizable non-monetary benefits in psychosocial wellbeing to employment, which are likely due to a dimension of the work, or the experience of working, itself.

Gender also played a strong role in the non-monetary value of employment. Employed males were 30 percent less likely to be moderately or severely depressed than their non-employed counterparts, made clear through a 22 percent decline in the number of days they reported having suicidal thoughts. In contrast, though women also benefited from employment, they benefited nearly as much from cash alone. Specifically, cash (with or without employment) led to equally meaningful increases in a woman’s intolerance for physical abuse and beliefs around her prerogative for household decision making.

Finally, the study found that the psychosocial impact of cash alone was quite small–– a surprising finding given that participants in the setting have a high demand for cash given that many lost all of their homes and assets while fleeing for safety. Moreover, this finding challenges findings on cash transfers from other settings where a cash transfer of this magnitude would be expected to substantially improve mental health, raising questions around the value of cash transfers in environments with scarce employment opportunities, and potential policy implications for Universal Basic Income and the future of work, particularly in developing world settings. 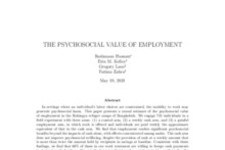 The Psychosocial Value of Employment