As migration patterns change, further evidence of the impact of regulatory programs in developing countries is needed. In Colombia, researchers are evaluating the impact of a temporary working and residence permit program for Venezuelan migrants. Outcomes to be studied include labor indicators, health, and integration measures. Results show that the permit program had significant positive effects on employment, welfare, and resilience for migrants.

Increased humanitarian crises, violence, poverty, political dysfunction, and environmental disasters have increased the scale and complexity of migration around the world. The number of international migrants globally reached an estimated 272 million in 2019, an increase of 51 million since 2010.1 In the past, regularization programs have been a response to the mass influx of migrants. Traditionally implemented by developed countries, some of them had a positive impact on wages, mobility, and integration of migrants.2 However, there is little research on the impact of regularization programs in developing countries where informal labor markets are common. This research will shed light on the impact that temporary work and residence permits for Venezuelan migrants in Colombia have on labor, health and integration measures.

At least 1.8 million people have migrated from Venezuela to Colombia in an effort to flee the social, economic and political crisis in their country.3] This migratory inflow has put pressure on the local labor markets as a large share of the population is of working age, very often more qualified than the local workers, and is willing to downgrade in occupation and wage to get hold of an income to fulfill their basic needs. To meet this challenge, the Colombian government has issued temporary work and residence permits (Permiso Especial de Permanencia, or PEP), guaranteeing labor rights, access to health, education, child care, and other social services for up to two years.

Note: This study is not a randomized trial

Researchers are evaluating the impact of granting working permits to Venezuelan migrants living in Colombia. Outcomes to be studied include labor, health, and integration. To identify eligible migrants, researchers used the RAMV (Registro Administrativo de Migrantes Venezolanos), an administrative record collected by the National Government with the original aim of characterizing the undocumented migrant population that were in Colombia by June of 2018. When the RAMV was collected, there were no plans for a permanent residence and work program for migrants. However, the record served as a basis for obtaining PEP3, as the program stipulated the following conditions: i) to be registered with the RAMV; ii) to be in Colombia at the time of the decree’s adoption; and iii) to have no criminal record or deportation orders.

To measure the program impact, researchers compare migrants who were registered in the RAMV, and thus were eligible to receive PEP3 with undocumented migrants that are not registered in RAMV and arrived in Colombia between January of 2017 and December of 2018. In the absence of an initial survey, researchers are using the information gathered in the RAMV and include recall questions in the final survey. These questions aim to collect data related to migration status, time of arrival to Colombia, job history in both Colombia and Venezuela, among other issues. The sample covers 4,000 households located in Bogota, Medellin, Barranquilla, and other 10 additional municipalities. Moreover, the research team will conduct 42 interviews with both documented and undocumented migrants.

3, 455 Venezuelan migrants ended up taking the initial survey. Then between October 2021 and February 2022, researchers administered a second survey to follow up on the participants who completed the initial survey, which 2,285 migrants took.

Employment: PEP increased the likelihood of a migrant who regularized their migratory status of attaining formal employment by ten percent. Given the vulnerability of Venezuelan migrants and the size of the informal economy in Colombia--where 48 percent of jobs are informal--the effect is sizable. Moreover, regularized migrants reported greater satisfaction with their jobs, had transitioned to better jobs, and had higher reservation wages.

COVID-19 resilience: Regularized migrants experienced a greater ability to cope with shocks related to COVID-19 with the effect driven by fewer household evictions and less reliance on family and friends for help.

Other livelihood indicators: PEP strengthened regularized migrants’ feelings of integrating into Colombian society and having more Colombian friends. Mental and physical health of migrants—which tend to be lower than those of host populations due to income effects, lack of access to health services in host countries, and a collapse in health infrastructure in their home countries--also increased as a result of PEP regularization. 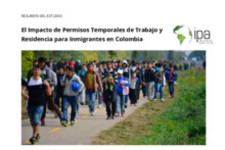 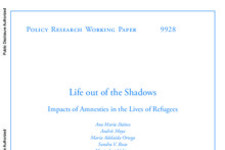 Life out of the Shadows: Impacts of Amnesties in the Lives of Refugees 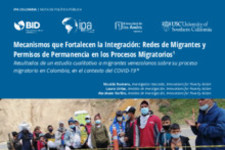