The Impact of Community Policing on Citizen Trust, Police Performance, and Crime in Uganda

In many countries, the police are widely distrusted, and citizens often assume that seeking redress through the state security and justice sectors will prove prohibitively expensive or futile. Many citizens also fear that engaging with these institutions will subject them to corruption and abuse. As a result, they often opt to bypass the police and courts altogether, relying instead on traditional authorities, or illegal and extrajudicial mechanisms of dispute resolution (e.g. vigilantism and mob justice). These approaches can be quick and inexpensive but they also tend to be idiosyncratic and biased against women and ethnic minorities.

While building effective, legitimate police forces is considered essential for sustainable peace and economic growth, few studies have explored the efficacy of mechanisms to increase civilians’ access to, trust in, and compliance with security sector institutions in the developing world. This study is part of a multi-country effort by the Metaketa Initiative to providing generalizable findings on the impacts of community policing in developing country contexts where relationships between citizens and police have been fraught.

Uganda ranks 28 on the Corruption Perception Index 2019 which serves as a leading indicator of public sector corruption around the world. Relations between Uganda Police Force (UPF) and civilians remain strained with correspondingly low levels of citizen trust, cooperation and crime reporting.

The other related community policing studies are being conducted in Brazil, Colombia, Liberia, Pakistan, and the Philippines. All of the projects used common interventions involving community engagement to solicit information on community problems from citizens and transmit information about police programs to citizens. In addition, each project involved at least one complementary intervention.

Working with IPA, and with support from IPA’s Peace & Recovery Program, researchers partnered with the Uganda Police Force, the Office of the Prime Minister, and the Justice, Law and Order Sector to evaluate the impact of a community policy program on crime reporting, citizen’s trust in and cooperation with the police.

The community policing program was inspired in part by the “Muyenga Model,” a homegrown model of community policing successfully piloted in Uganda which aims to create opportunities for positive and mutually respectful interactions between civilians and police officers by providing mechanisms for increasing police promptness for citizen redressal, reporting corruption and abuse of force, and encouraging citizens to comply with the police.

The model had three components:

2.) The formation of community watch teams

3.) Dissemination of information about UPF oversight and accountability mechanisms

One year after the programs began, researchers measured impacts on trust in the police, citizen cooperation with the police, crime and violence rates, and other outcomes.  They used survey data (from citizens and police) and crime data to estimate the effects.

Overall, the study found that the community policing program implemented in Uganda had no impact on the incidence of crime, perceptions of the police, or trust in police. Citizens were no more likely to say they were satisfied with the police and no less likely to say they felt intimidated by the police. Further, citizens did not improve their beliefs about police intentions.

When it came to police abuse, the community policing program appears to have increased rather than decreased police misbehavior, especially with regard to bribe-seeking and corruption. While the program increased the frequency of police-community interactions, it seems these interactions were sometimes accompanied by police requests for bribes to pay for fuel, stationary, and other necessities to do their job effectively.

However, the results do show that citizens’ knowledge about the criminal justice system improved and that the number of crimes reported to the UPF increased. This second finding could be due to an increase in citizen crime reporting, rather than to an increase in actual crime.

The results suggest that careful monitoring, incentives, and sanctions must be put in place for community policing to be successful.

See the results in an additional paper published in Science here. 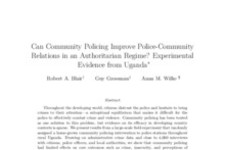 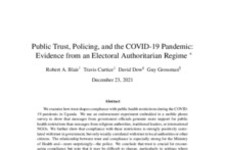 Public Trust, Policing, and the COVID-19 Pandemic: Evidence from an Electoral Authoritarian Regime 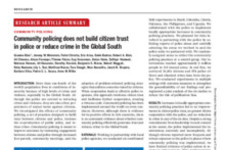