Examining Underinvestment in Agriculture: Returns to Capital and Insurance Among Farmers in Ghana

Farmers in sub-Saharan Africa tend to underinvest in inputs such as fertilizer, hybrid seeds, and labor, though such investments could increase their agricultural yields and profits. The constraint may be cash, or it may be the risk. In northern Ghana, researchers conducted a randomized evaluation to evaluate whether access to capital or risk was driving farmers’ investment decisions. The study found that farmers who were offered weather insurance spent more on inputs such as chemicals, land preparation, and labor than those who received cash grants—suggesting that risk, rather than capital, was the major constraint on investment.

Underinvestment in agricultural inputs such as fertilizer, hybrid seeds, or labor is thought to drive low crop yields in Africa and other parts of the developing world. Several factors may help explain why farmers fail to invest in such potentially profitable inputs. It is possible that they are wary of the riskiness of adopting new agricultural methods or tools—if they invest and their crops still fail, they will have even less money than if they had not invested at all. Farmers may also lack the capital necessary to purchase these inputs, and be unable to obtain credit to finance investment in their farms. Because the returns to using new technologies can be so high, encouraging use among farmers has the potential to greatly improve their welfare, but financial institutions and policymakers need to first understand what factors are truly driving underinvestment in agriculture.

The climate of northern Ghana’s savannah region has a single short wet season, with high annual variation in rainfall. This kind of weather pattern creates great risk for farmers who depend on the weather for their livelihood, particularly when agriculture is primarily rain-fed, as it is in this area. There is strong evidence that shocks in the amount of rainfall translate directly into consumption fluctuations for farmers, and so investment in new agricultural technologies or methods has the potential to significantly affect welfare. Throughout Ghana, the average farmer uses only 7.4 kg of fertilizer per hectare, while in South Asia fertilizer use averages more than 100 kg per hectare. Initial surveys in northern Ghana revealed that the median farmer participating in this study did not use any chemical inputs on their crops, often citing lack of money or concerns regarding weather risk as key obstacles preventing investment.

In the first year of the study, researchers tested the relative importance of capital and risk in driving farmers’ investment behavior. From a total of 502 households, 117 were randomly selected to receive a cash grant to fund agricultural inputs; these farmers received GHC 60 (approximately US$45) per acre for up to 15 acres, delivered at a time of their choosing. Another 135 randomly selected households received a grant for an insurance scheme that paid roughly GHC 100 (US$75) per acre of maize if rainfall at a local weather station went above or below specified thresholds. Ninety-five households received both the cash grant and the insurance grant, while 155 households received no additional services and formed the comparison group.

In the second year, researchers tested different prices for rainfall insurance among the original sample households, plus households in an additional twelve communities. Households were visited up to four times by marketers: during the first visit they were informed about the product, during the second visit they were asked to sign the contract and pay premiums, during the third visit the marketer issued a policyholder certificate, and during a fourth visit an auditor verified their understanding of the product. The price that people were offered for insurance was randomly assigned at the community level: households in the original sample would be offered rainfall insurance at a cost of either 1 GHC or 4 GHC (approximately US$0.75 or US$3), while in the newly added communities, households would be offered insurance at either the market price of GHC 12-14, or the actuarially fair price of GHC 8-9.5.

Importance of Capital vs. Risk: Results from the first year suggest that risk, rather than capital, was the major constraint on investment among farmers in this sample. Farmers who received the insurance grant increased their expenditure on farm chemicals, and also brought more acres of land under cultivation. If the primary constraint on investment was a lack of capital, then the insurance product, which offered no up-front payouts, would not have affected their ability to purchase materials. Many farmers appeared to recognize the value of the insurance product, with a significant proportion choosing to purchase insurance in years two and three. Take-up of the insurance product did not change when a token price of GHC 1 per acre was charged, and even at the actuarially fair price of almost GHC 10 per acre, 40-50 percent of farmers purchased insurance.

Impacts of Weather Insurance: Farmers with weather insurance invested more in agricultural inputs, particularly in chemicals, land preparation, and hired labor. Total cultivation expenditures were more than GHC 250 (US$188) higher for farmers with insurance, representing a 33 percent increase relative to the comparison group. These impacts were even larger among farmers who received both insurance and a capital grant. Despite the increases in production, it is not clear that investments were actually profitable for farmers: the additional expenditures may have increased by more than the value of the additional output, depending on how household labor is valued.

Trustworthiness of Insurance: Results suggest that how much farmers trust the insurance scheme has a large impact on their take-up and response to rainfall insurance. Take-up of insurance was considerably higher among farmers who also received a capital grant, but it was not higher among households who were wealthier. This suggests that farmers might not have been entirely confident that the promised insurance payouts would be made when trigger events occurred, and so they were more willing to take the risk of purchasing when they had been given extra cash. Similarly, individuals who were familiar with others who had received insurance payouts in previous years were significantly more likely to take-up insurance themselves.

Read about the new agricultural insurance product launch as a result of this study here, and about its' 2012 payout to farmers here.

Click here for a Q&A with researcher Chris Udry 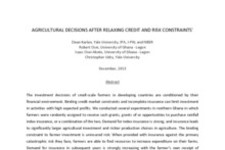 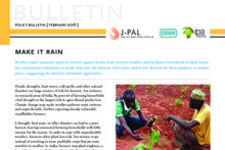