Community Driven Development in the Philippines

Community-driven development (CDD) has become an increasingly common tool used by governments to address the needs of poor communities. The CDD approach is characterized by the movement of responsibility over resources and planning decisions to local decision-makers in an effort to more accurately and efficiently identify the needs on the ground. Empowering communities to take charge of their own development may also lead to long-term effects on how they perceive their own role in governance, with improvements in accountability, transparency, and the quality of decisions. This study endeavors to provide an independent assessment of the impact of a national community-development program and to contribute to broader research about the socio-economic, governance, and social capital impacts of CDD programs.

A keystone poverty reduction initiative of the Government of the Philippines is the Kapit-bisig Laban sa Kahirapan-Comprehensive Delivery of Social Services (KALAHI-CIDSS, or KC). KC is a CDD program implemented by the Department of Social Welfare and Development of the Philippines (DSWD). KC targets poor communities in the country’s 48 poorest provinces (out of 81). In 2011, KC received US$120 million in funding from the United States government’s Millennium Challenge Corporation Compact in the Philippines and $59 million in loan funding from the World Bank. The MCC contracted IPA to carry out an impact evaluation of the program.

This study will evaluate the impact of the KC program on multiple outcomes, including access to key services; the quantity and quality of participation in local governance around decision-making and implementation; and knowledge and awareness of local governance.

The KC program trains the communities and their local governments, both at the village and municipal levels, in choosing, designing and implementing public projects called “subprojects”. This is done through a five-stage program known as the KC Community Empowerment Activity Cycle (CEAC). Roughly one-third of villages receive subprojects each year, although some villages may receive multiple subprojects and others none over the course of the project. Most subprojects are programmed to be implemented within six months, thus the stages of preparation, funding and implementation generally take nine to twelve months and are called a cycle. The same process is repeated over three one-year cycles, with cycles two and three having a condensed CEAC phase since communities have already become familiar with the project and process.

Data for the estimate of outcomes and impacts of KC will come from multiple rounds of data collection exercises, each involving several instruments including a household survey, village survey, a Structured Community Activity, qualitative focus groups, and qualitative key informant interviews. Each round of data collection will be implemented by Philippines-based survey firms and overseen by the Millennium Challenge Account-Philippines and IPA. 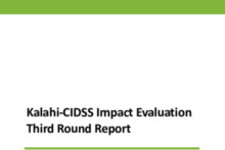 IPA Philippines Presentation of Results on the Impact Evaluation of the Community-Driven Development Program
Event | September 14, 2017