Poor sanitation is estimated to cause 280,000 deaths per year worldwide, despite the existence of simple, effective solutions. Governments and major development institutions have dedicated substantial resources and attention to improving sanitation in developing countries, but there has been little rigorous research on how best to increase sanitation coverage. This evaluation in Bangladesh found that subsidies for hygienic latrines targeted to the poor substantially increased latrine coverage and reduced open defecation. However, a commonly used community-motivation model, did not increase adoption of hygienic latrines when implemented alone, nor did providing information and technical support to community members. Results also suggest that adoption of improved latrines spurred adoption among neighbors, suggesting improved sanitation triggers a virtuous cycle.

One billion people, or about 15 percent of the world’s population, currently practice open defecation, and another 1.5 billion do not have access to a hygienic latrine or toilet.1 In spite of the existence of simple, effective solutions, such as pour-flush latrines, poor sanitation is estimated to cause 280,000 deaths per year, and may also contribute to serious long-term health conditions.2 Given the scope of the problem, governments and major development institutions have devoted substantial resources to improving sanitation in developing countries.3 However, significant disagreement remains over how best to increase sanitation coverage. Is it more effective to focus on demand generation through information campaigns and behavior change programs, or should governments focus on directly providing toilets to schools or households? Or is it better to subsidize private investment in sanitation? Do subsidies hurt intrinsic motivation? Researchers investigated these questions in Bangladesh.

This research was conducted in relatively dense rural areas of Tanore, a sub-district in northwest Bangladesh, the poorest region of the country. Although sanitation coverage has increased dramatically in rural Bangladesh in recent decades, progress in Tanore has been slower. Prior to the start of the study, 31 percent of households reported that they either lacked a latrine or used an unimproved latrine. Only 50 percent had regular access to an improved sanitation facility, defined as a toilet or latrine that separates human excreta from human contact.

Researchers partnered with WaterAid Bangladesh and Village Education Resource Center to measure the impact of different policies designed to increase community-level latrine coverage on actual latrine coverage, investment in hygienic latrines, and the prevalence of open defecation. This research also aimed to provide insight into the household- and community-level behavioral mechanisms driving any effects.

Researchers randomly assigned 380 neighborhood communities, which included 18,254 households, to one of four groups:

1) Latrine Promotion Program (LPP) – Communities were invited to participate in a multi-day, neighborhood-level exercise to raise awareness of the problems caused by poor sanitation, and to motivate the community to increase coverage of hygienic latrines. The design of LPP followed that of Community-Led Total Sanitation, which focuses on behavioral change and community mobilization in eliminating open defecation. The approach has been implemented in over 60 countries worldwide.

2) LPP combined with subsidies – Communities were invited to participate in LPP and households were randomly selected via a public lottery to receive discount vouchers for the purchase of hygienic latrines. The vouchers provided a 75 percent discount on any of three available models of latrine, priced (after subsidy) US$5.5, US$6.5 and US$12. Households were responsible for delivery and installation costs of US$7-10. The richest 25 percent of households were not eligible for vouchers.

3) Information and technical support – “Latrine Sales Agents” were hired and trained from these communities and linked to local masons that built latrines. The agents acted as a resource for community members and also offered technical support for latrine installation.

Open defecation: Community motivation (LPP-only) did not significantly reduce open defection, nor did information and technical support. However, adding subsidies to LPP reduced open defection rates by 9 percentage points among adults in villages that received subsidies (including households that did not receive subsidies), representing a 22 percent reduction relative to the comparison group.

Overall, these results are consistent with a growing body of research showing price is a primary barrier to adoption of health products. The results counter a commonly held belief that community-based motivation is the most effective way to move households away from open defection and toward basic latrines. Finally, this study presents evidence of the importance of social influence, and the possibility of a virtuous cycle where adoption of improved latrines spurs further adoption. 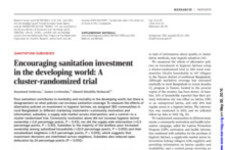 Encouraging sanitation investment in the developing world: A cluster-randomized trial