Returns to Secondary Schooling in Ghana

Primary school enrollment has risen in Sub-Saharan Africa over the past two decades, but secondary school enrollment rates remain relatively low. In this ongoing study in Ghana, researchers are evaluating the effect of secondary school scholarships on educational attainment and cognitive skills in the short run, and on life outcomes in the longer run, from employment and health outcomes to civic participation and attitudes. Results thus far showed that cost was a key barrier to secondary school enrollment among middle school graduates, and full scholarships increased young people’s educational attainment, knowledge, skills, and preventative health behaviors. For women, secondary schooling also delayed marriage and pregnancy. Scholarship winners who enrolled in academic tracks were more likely to enroll in tertiary education, and winners who enrolled in vocational tracks had higher earnings than non-winners. Researchers will continue to track participants to 2020 and beyond.

The impact of expanding secondary schooling is a topic of national concern in Ghana. In recent years, the two major political parties have debated the merits and feasibility of implementing universal free senior high school.

Researchers are evaluating the impact of the Ghana Secondary Education Program (GSEP), which provides full, need-based scholarships, on secondary school enrollment and the returns to secondary education in Ghana over more than ten years. In fall 2008, they identified 2,064 students who had earned admission into an academic or vocational track at a public high school but had not enrolled due to financial constraints, and enrolled them in a longitudinal study. Among the students, 682 students were selected by lottery to receive a scholarship that covered 100 percent of the tuition and fees for four years at a local public school. The scholarships were announced four months into the 2008-2009 academic year; over 75 percent of scholarship winners enrolled in secondary school that year.

At the beginning of the study, the research team surveyed all participating youth and their guardians. At the time, the youth ranged between 13 and 25 years old, with an average age of 17 years. Study participants (irrespective of scholarship status) were given a cell phone and mobile credit, and once a year, researchers attempted to call all participants in order to update their contact information and ask for their current schooling status and location. If participants could not be reached over the phone, researchers attempted to find them by visiting their home area.

Researchers conducted an in-person, in-depth follow-up survey in 2013 to measure participants’ educational attainment, cognitive skills, employment status and earnings, health, marriage status and fertility, time and risk preferences, civic participation, and other outcomes. In 2015 and 2016 they conducted shorter phone surveys to update this information. They will continue to track the study groups into 2020 and beyond.

Results indicate that school fees (rather than the opportunity cost of being in school) were the major barrier to educational attainment for youth in the study. Removing that barrier produced large gains in educational attainment, skills, knowledge, and preventative health behaviors. Women also delayed childbirth and marriage relative to their peers who were not offered scholarships. As of 2016, scholarship winners who enrolled in academic tracks were more likely to subsequently enroll in tertiary education, while winners who enrolled in vocational tracks had higher earnings than non-winners did.

Employment and earnings: Since scholarship winners were still more likely to be enrolled in tertiary education by 2016, it is too early to definitively report long-term impacts on labor market outcomes. However, results suggest that scholarship winners had higher earnings on average: 61 percent of scholarship winners reported any earnings in the past month, compared to 56 percent of non-winners. These effects are concentrated among those admitted to vocational tracks, for whom there were no tertiary enrollment impacts.

Consistent with the challenging macroeconomic environment in Ghana at the time, many youth in the sample did not yet have jobs as of the last follow-up (2016). Among unemployed youth, 46 percent of scholarship winners reported actively searching for a job, compared to 32 percent of non-winners.

Among students admitted to vocational tracks—for whom scholarships had no impact on tertiary enrollment—winners had earned 26 Ghanaian cedi more in the past month than non-winners (a 24 percent increase). This increase was accounted for by an increased probability of being employed, rather than higher wages per hour. For scholarship winners admitted to academic tracks—16 percent of whom enrolled in tertiary education—there were not yet any discernible impacts on labor market participation or earnings as of 2016.

Researchers are currently analyzing results on additional outcomes, such as civic participation, levels of trust, respect of authority, and attitudes towards religion. With support from the National Institutes of Health (NIH), they are also collecting information on the children of study participants. Through a grant funded by the Post-Primary Education (PPE) Initiative, researchers will also follow up on participants until they reach the age of at least 30 to shed light on the long-term impact of reducing financial barriers to secondary education on a wide range of outcomes, from income to health and fertility decisions to civic participation. 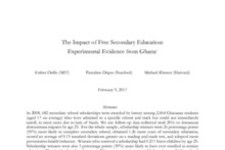 The Impact of Free Secondary Education: Experimental Evidence from Ghana