Procuring Firm Growth: The Effects of Public Procurement on the Growth of Small and Medium Enterprises

For small and medium firms everywhere, the lack of access to buyers can often mean higher transaction and input costs and few incentives to improve efficiency. Governments, however, have strong buying power and increased government purchasing from these firms may help with this constraint. This study uses procurement auctions by Brazil’s federal government to test if the added demand from government improved the performance of winning firms. Results indicated that winning a contract increased firm growth (as measured by size) by 2.2 percentage points in that quarter, and that 93 percent of subsequent new hires had not been formally employed previously. These growth effects persisted beyond the length of the government contracts.

Note: this is not a Randomized Controlled Trial

Inadequate access to markets is often identified as one of the main barriers to growth for Small and Medium Enterprises (SMEs). Since governments in developing countries spend approximately 50 percent of their budgets purchasing goods and services, they could play a significant role in improving SMEs’ ability to grow through public procurement procedures. ​

Since 2001, Brazil’s federal government has used reverse auctions to procure off-the-shelf goods. As of 2005, these auctions are exclusively carried out through the Internet portal ComprasNet, where around 2,200 public institutions across the country list goods to be procured, and registered firms are invited to bid to supply them. In 2012, 0.76 percent of Brazil’s GDP – or R$ 33.6 billion worth of contracts accounting for 46 percent of the federal government’s procurement spending – was awarded through electronic procurement.

Researchers compiled a dataset with information from auctions that took place between 2004 and 2010 and matched it with comprehensive employer-employee data for the universe of formal firms in Brazil for the same period. They then compared the subsequent growth and performance of firms that won a contract against those that narrowly lost the bid.

Winning a government contract led to a swift increase in firm growth, and notably improved the performance of a firm within the same quarter. The impact of these contracts on firms in the retail sector was almost twice that of manufacturing firms, which is partly explained by the higher wages for manufacturing workers. Likewise, the growth effects were more pronounced among firms younger than five years: for them the impact was twice that of firms five to fifteen years old; and four times that of firms older than 25 years. Ninety-three percent of growth in new hires came from workers who were unemployed or working in the informal sector.

The effect of winning a government contract on growth persisted at least for nine subsequent quarters following a successful bid. The growth effect extended beyond just the government contract: winning a bid was associated with an increase of approximately 60 percent in the value of subsequent contracts in the same month, and 30 percent more one year later. Likewise, winning firms expanded into other markets, as the share of bids in their own cities decreased by 16 percent within 90 days. Winning firms also expanded their product offering by 15 percent following a win.
These results suggest that demand-side approaches can encourage growth among SMEs, that this effect is larger for newer firms, and that it translates into increased hiring. 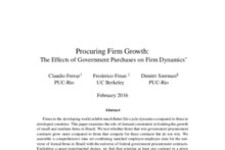