Can online sexual health education courses improve students’ sexual health knowledge, attitudes, and behavior? Do such courses also have positive effects on the peers of students who take the course? Researchers evaluated the impact of an online sexual health education course on the knowledge and sexual behavior of urban Colombian high school students. The education program led to significant impacts on knowledge and attitudes. No impacts were found on self-reported measures of behavior, but the program led to a reduction in incidence of sexually transmitted diseases among sexually active females. Moreover, results pointed to a significant increase for the treatment group in redemption of vouchers for condoms among students.

As young adults marry at older ages, they are more likely to have sex before marriage, increasing their risks of unwanted pregnancies and sexually transmitted infections (STIs). In low-income settings, adolescents face the added constraints of lower availability of information about safe sexual practices and restricted access to reproductive health services. Furthermore, sexual risk-taking in developing countries may have graver consequences because governments lack the resources and health systems to treat certain conditions.

In recent years, the rise of information and communication technology programs has changed school-based sexual health education.Some research[1] suggests that for mainstream subjects such as math and reading, computer-based instruction may not work as well as conventional teacher instruction. We examined whether this is true for sexual health education, or if the reverse was true.

In Colombia, only 55 percent of sexually active females aged 15-17 used a condom in their first sexual encounter.[2] This level of risk-taking is reflected in the fertility rate among adolescents in Colombia of 74 births per 1,000, compared to 41 per 1,000 in the United States, 14 in Canada, and five in the Netherlands.[3] By age 19, 20 percent of female adolescents in Colombia have been pregnant while 16 percent are already mothers. In order to tackle this challenge, legislation establishing sexual education as obligatory in Colombian public schools was passed in 1994, and national public policy was drafted by 2003.

Profamilia is an internationally recognized non-profit provider of family planning and reproductive health services in Colombia, with over 33 clinics and 1,800 employees. A member of the International Planned Parenthood Federation since 1967, Profamilia is Colombia’s largest non-governmental organization focused on sexual health and reproductive health. Prompted by the deterioration of important adolescent sexual health indicators, such as teenage pregnancy rates, Profamilia’s education branch, Profamilia Educa, developed an online sexual education course for adolescents in public schools.

Researchers partnered with Profamilia to evaluate the impact of the online sexual health education course on the sexual health knowledge, behavior, and attitudes of Colombian high school students who took the course, as well as on their peers, who did not take the course. The study consisted of 138 ninth-grade classrooms from 69 public schools in 21 Colombian cities.

The course had five separate modules covering the topics of sexual rights, pregnancy/family planning and the use of contraceptives, STIs/HIV and the use of condoms, objectives in life and the role of sexuality (empowerment), and prevention of sexual violence.Profamilia implemented the course in the school’s computer lab with teacher supervision. In addition, students had access to the course from any Internet-enabled computer using a password-protected account. Students were also assigned an anonymous remote tutor in the central Profamilia offices who would answer questions online related to the material individually and confidentially.

To complement the self-reported data, and to come as close as possible to measuring the actual use of condoms in a credible manner,researchers offered students a voucher for six condoms six months after the end of the study. Profamilia recorded which students redeemed their voucher at the local health clinic.

The online sexual health education course led to significant impacts on knowledge and attitudes and a 52 percent increase in condom redemption. Although fewer STIs were reported for females who reported being sexually active in an initial survey, there was no impact on self-reported behavior on average. However, the program led to a large increase in redemption of vouchers for condoms, suggesting that the indeed the program did change behavior. Notably, the impacts of the course intensified when a larger fraction of a student’s friends was also treated.

Knowledge: The course produced a 0.37 SD increase in overall knowledge one week after the intervention and a 0.38 SD increase in overall knowledge six months after the intervention. The lowest impact was found on the identification of situations of sexual violence - we found that treated beneficiaries were 0.11 SD more likely to correctly identify a situation of sexual violence.

Attitudes: The course produced significant effects of 0.24 SD in terms of attitudes one week after the intervention and 0.17 SD six months after, which suggests some decay in attitude impacts over time.

Sexual Behavior: The course did not change the average number of partners, frequency of sex, or rate of abstinence over the six months following the course. To go beyond self-reported measures, however, researchers found that 27 percent of treatment students redeemed the condom vouchers, compared to 18 percent of comparison students, a 52 percent increase. This result points to a significant increase in condom use.

Social Networks: Researchers documented a strong social reinforcement effect: the impacts of the course intensified when a larger fraction of a student’s friends was also treated. In particular, when full sets of friends were treated researchers found significant reductions in sexual activity, frequency of sex, and number of partners. Throughout the analysis, researchers did not find evidence of effects on peers who did not take the course, i.e. “spillovers.”

Policy Lesson: Web-based education is a plausible alternative in a context of tight budget constrains in public education given the widespread availability of the Internet in schools throughout the world and accelerated improvements in software quality. In societies where teachers may be unwilling or unable to provide sexual education, online courses may also prove a useful and cost-effective substitute for in-person instruction. Furthermore, the cost-benefit analysis suggests that because online sexual health education programs are extremely low cost, their measurable benefits in terms of STI reductions make up for the costs.

Effectiveness and Spillovers of Online Sex Education: Evidence from a Randomized Evaluation in Colombian Public Schools 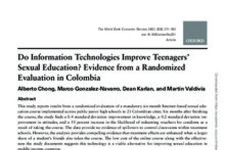