The Impact of Unconditional Cash Transfers in Kenya

Unconditional cash transfers (UCTs) allow poor households the choice and flexibility of allocating resources to meet the needs they find most pressing. In Rarieda, Kenya, researchers conducted a randomized evaluation to measure the impact of GiveDirectly’s UCT program on poor rural households’ economic and psychological well-being. Results demonstrated that the program had significant welfare-improving impacts, both economically and psychologically, for transfer recipients.

Low-income households are often unable to make important welfare-improving investments, such as going to the doctor or investing in better farming technologies, because they lack the money to do so. One potential policy response is to provide money that enables households to make these productive investments. Existing research shows that conditional cash transfers (CCTs), which provide households with cash and incentivize certain investments or behaviors, can have important benefits for households’ welfare. However, there is less evidence about the impact of unconditional cash transfers (UCTs), which provide money unconditionally and are less costly to administer than CCTs because they don’t require the monitoring and follow-up. However, without any conditions, people may be less inclined to spend the money responsibly or on productive investments. To address these questions, researchers conducted a randomized evaluation in Rarieda, Kenya to measure the impact of GiveDirectly’s UCT program on poor rural households’ economic and psychological well-being.

GiveDirectly, Inc. is an international NGO that makes unconditional cash transfers (UCT) to poor households in developing countries. Since 2011, the organization has operated in Kenya by providing UCTs to households in the country’s poorest regions through M-Pesa, a mobile phone-based money transfer service that is widely used throughout the country. This study took place in Rarieda, a predominantly rural and poor district in western Kenya.

Researchers conducted a randomized evaluation to measure the impact of GiveDirectly’s unconditional cash transfer program on poor rural households. Among 126 of the poorest villages in the district, 63 were randomly selected to receive the UCT, and 63 served as a comparison group. Within the 63 UCT villages, researchers identified 503 poor households living in a house with a thatched roof to receive a cash transfer. To measure whether transfers affected nearby households, researchers collected data on an additional “spillover” 505 households who did not receive a transfer but lived in the same village as households that did. In the 63 villages that did not receive any UCT program, 432 households served as a pure comparison group. Within the villages receiving the UCTs, researchers examined three design features:

Researchers surveyed all households before the program began and approximately 4 months after the program ended.

Economic impacts: GiveDirectly households significantly increased consumption by US$36.18 per month (23 percent), across a range of goods including food, medical and educational expenses, and social events. There was no increase in expenditures on temptation goods, such as alcohol and tobacco. Overall, the UCT had similar impacts regardless of transfer recipient and timing.

GiveDirectly households increased investments by US$278.52 (58.3 percent), in assets such as livestock, furniture, and metal roofs. GiveDirectly households were 23 percentage points more likely to have a non-thatched roof after the program, compared to 16 percent of households in the comparison group. Monthly-transfer recipients were less likely than lump-sum recipients to invest in these types of assets, suggesting that they were less able to save the UCT. Investments in income-generating activities (e.g., non-agricultural businesses and livestock) increased and revenues from these activities increased by US$16.64 per month (34 percent). However, estimated profits did not.

There were no effects on economic outcomes in spillover households compared to pure comparison villages, suggesting that the UCT had no major impact on the overall economic environment in GiveDirectly villages.

Psychological well-being was 0.16 sd higher for GiveDirectly households with female recipients compared to GiveDirectly households with male recipients, driven largely by significantly lower cortisol levels; there were no other differences in outcomes among these households. One reason for this improvement in psychological well-being may be that female empowerment improved among these households (measured along indicators such as reduced domestic violence and increased female decision-making power), though results did not capture a significant increase on these measures. 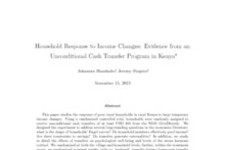 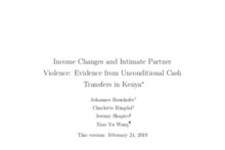