Globally, many rural farmers lack access to effective savings and storage devices. This issue is particularly acute for rural farmers who receive income as a lump sum at harvest but have ongoing expenditures throughout the year. Researchers worked with existing savings clubs in Kenya to study the effect of two interventions on savings: the provision of communal crop storage devices and the provision of savings accounts earmarked for farm purchases. Researchers find that the products were popular: about 56 percent of farmers took up the products. Respondents in the maize storage intervention were 23 percentage points more likely to store maize (on a base of 69 percent), 37 percentage points more likely to sell maize (on a base of 36 percent) and (conditional on selling) sold later and at higher prices. Researchers found no effects of the individual input savings intervention on input usage, likely because baseline input adoption was higher than expected.

In many rural areas in Africa, prices for staple foods like maize experience predictable, sizeable fluctuations throughout the year, from post-harvest lows to pre-harvest peaks. However, farmers are unable to reap financial gains from selling their crops later in the season, when prices are usually higher. Providing farmers with a way to store grains after harvest may enable them to sell when prices are higher and thereby increase their income.

A second problem is that farmers typically receive the bulk of their income after harvest, and tend to gradually draw on this over the rest of the year to cover their expenses. However, in the absence of financial accounts, saving money can be challenging. As a result, farmers may not have sufficient resources to purchase inputs required for farm reinvestment, such as fertilizer and other crop-enhancing technologies. Recent research indicates providing households with savings accounts can increase their cash savings. However, there is limited evidence regarding how savings services can be most effectively provided to farmers, who face unique constraints.

To fill these gap, researchers conducted a randomized evaluation with existing savings clubs in Kenya to study the effects of two interventions: provision of savings accounts earmarked for input purchases like fertilizer; and provision of group-based crop storage devices.

The evaluation took place in Busia District, Western Kenya, where maize is the staple crop. Similar to other grains in rural Africa, maize experiences large seasonal price variations. In 2015, the average farmer reported yields of roughly 480 kg, worth approximately US$131 immediately post-harvest. However, if held until maize prices peaked later in the season, the same yield would be worth US$180 (an increase of over 30 percent). While most farmers store at least some fraction of their maize for future use, much of it is sold to meet immediate cash needs and because storing it brings the additional risk of spoilage by pests.

Farmers in Kenya also tend to have limited access to financial instruments. As such, they face the additional challenge of saving towards crop inputs and farming needs. Farmers receive income in large sums at harvest, and it may be hard to save this for future years’ input use. One way to overcome these financial constraints is through informal savings networks. In Busia, many farmers participate in Rotating Savings and Credit Associations (ROSCAs).

Researchers worked with savings clubs in Kenya, called ROSCAs. ROSCAs are typically comprised of a group of individuals who make regular cash contributions to a common pot of money, which is distributed as a lump sum to a different group member at each meeting. There were two interventions, one designed around communally storing maize, and the other around saving cash earmarked for inputs.

In 2015, researchers completed a door-to-door census of 552 individuals living in 17 villages in Western Kenya to develop a list of all ROSCAs operating in the area, identifying a total of 497. Researchers then randomly assigned each ROSCA to one of three groups:

In addition, in order to further reduce barriers to investing in agricultural inputs, researchers randomly assigned ROSCAs in both GSRA and ISRA groups to receive discount coupons that farmers could redeem at local stores to purchase inputs like fertilizer, seeds, herbicides, and pesticides. The value of the coupon randomly varied from 10 to 90 percent of the cost of inputs. By varying the value of the coupon, researchers sought to understand how much farmers would be willing to pay for each type of input.

Results suggest that provision of communal crop storage devices can increase storage among smallholder famers. Farmers in the group savings intervention were more likely to store and sell maize. Farmers who did sell maize did so later in the season and at higher prices.

GSRA: Take-up of the crop storage program was high—57 percent of ROSCA members set aside maize after harvest for the GSRA. GSRA users were 23 percentage points more likely to store maize at least one month after harvest (a 33 percent increase) and stored 16 percent more maize relative to farmers in the comparison group. GSRA farmers were also 37 percentage points more likely to sell maize in the year after the harvest. Among the farmers who sold their maize, GSRA farmers sold on average one month later and received prices that were 6 percent higher on average, resulting in higher incomes.

Researchers suggest that the program was successful in encouraging farmers to set aside maize, through the combination of pest-resistant storage bags, mental accounting improvements from segregating grain for storage, and peer-effects generated by communal storage. They concluded that group-based savings programs can also be cost-effective. Researchers estimate the GSRA intervention resulted in roughly US$98 per ROSCA in gains at a cost of just US$35.

ISRA: Take up of the individual savings account was also high—56 percent of ROSCA members contributed to the ISRA. ISRA users deposited US$5.50 on average, equivalent to 12 percent of farm input costs. The ISRA did not impact farmers’ use of inputs required for farming, such as fertilizer and pesticide, likely because baseline input usage was already high.

Discount coupon: Almost all participants redeemed their coupons when input prices were heavily subsidized, but only 10 percent were redeemed when there was only a slight reduction in prices. There was no difference in the pattern of coupon redemption between farmers across all groups. Since the farmers in the study already regularly purchased inputs, these purchases may have simply been reshuffled.

In ongoing fieldwork conducted in early 2018, researchers found that 90 percent of ROSCAs that could be traced were still implementing the GSRA two and a half years after the original intervention. This suggests that demand among farmers for effective crop storage solutions is high. 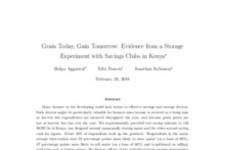