Uganda has one of the highest prevalences of intimate partner violence (IPV) globally. Research suggests community leaders can promote behavioral change, thereby reducing IPV. In Uganda, researchers conducted an impact evaluation of a faith-based couples counseling program called Becoming One. To attract a wide audience, Becoming One does not directly address violence, focusing instead on improving couples' relationships and shifting decision-making power. A year later, the program reduced IPV by 12 percent and shifted power within the relationship towards women, while also improving intimacy and communication.

Intimate partner violence (IPV) is widespread, affecting nearly a third of women[1] over their lifetime, and often spikes in times of crisis such as the current COVID-19 pandemic. Violence persists in part due to strong social norms that position men as the head of the household entitled to sex and the deference and money of their partners, and to norms that allow violence as an appropriate means of enforcing men's position and entitlements.[2]

To reduce violence, many programs aim to change people's perception of roles and expectations that are socially or morally acceptable. Research suggests[3] that these perceptions are strongly influenced by community leaders, and that targeting these people can be an effective channel for behavioral change. As moral authorities and gatekeepers of religious marriage, faith leaders are a compelling target for changing perceptions about behavior in relationships. However, in many places they also often uphold or reproduce patriarchal gender roles. This research tests whether, when given the opportunity to present a more progressive vision of relationships, faith leaders could reduce intimate partner violence.

In Uganda, more than half (56 percent) of ever-married women had experienced spousal violence, while 39 percent of ever-married women had experienced it in the last year.[4] Biblical justifications are often offered to legitimize male dominance and violence against women. Roughly 70 percent of those surveyed by the research team agreed that the Bible placed men at head of household. Overall, about 86 percent of Ugandans report that their faith is very important to them, and more than 80 percent attend religious services weekly.[5] It is common for churches to require counseling courses if couples want a church wedding, and many couples seek advice and mediation from their faith leaders when stressful events occur.

Using a dynamic human-centered design process, the Airbel Impact Lab at the International Rescue Committee (IRC) developed a group faith-based couples' counseling program that leverages existing trusted systems and messengers to deliver a different vision of a religious relationship and prevent intimate partner violence. World Vision then implemented the program named Becoming One, and IPA conducted a randomized evaluation to measure its impact.

The Becoming One program was implemented in three districts in Western Uganda– Kamwenge, Kakumiro, and Kagadi. World Vision identified 140 faith leaders who then recruited the 1,680 couples who participated in the program. To measure the impact of the program, researchers grouped couples within congregations based on their self-reported experience with IPV before the program implementation. Half were assigned to receive the program immediately (October 2018), while the other half began the program in December 2019 (the comparison group) after the conclusion of the research.

Couples attended twelve in-person group sessions over three to four months that focused on improving couples' relationships in a way that benefited both women and men, rather than on violence specifically. Thematic areas included communication, emotional regulation, shared control over finances and, sexual consent and pleasure. Faith leaders took couples through illustrated workbooks that provided stories, biblical principles, exercises, and skills to practice at home.

* Due to the sensitivity of researching violence committed by an intimate partner, researchers took additional measures to minimize the risk of study participants’ retraumatization, to support research staff experiencing vicarious trauma and to prepare the team to follow ethical guidelines and protocols in conducting IPV research. Read more in the Ethics Appendix and this related post.

A year later, the Becoming One program shifted power from women to men and reduced intimate partner violence. Although men reported loss of control and decision-making authority relative to their partner, the overall benefits were not exclusive to women, as both men and women reported improvements in their relationship. Researchers found that the faith leaders whose personal views on gender equality aligned with those of the program and those who most closely followed the program content produced the largest changes.

Intimate partner violence decreased by 12 percent one year after Becoming One was implemented. Reductions in violence were driven by decreases in the proportion of women reporting their partner coerced sex or raped, punched, or pushed them – the acts most commonly reported before the program.

For women in relationships where violence persisted, the frequency of emotional, physical, and sexual violence decreased, as did the severity.

Power Shifted from Men to Women

Women participating in the Becoming One program gained control and decision-making power – mainly through increased participation in decisions about what to do with men’s earnings – while men reported a loss of control and decision-making power. Across an index composed of 24 items measuring women’s status within the household, women in Becoming One saw their position improve by about 0.2 standard deviations.

Relationships Improved for Both Partners

Both men and women experienced improvements in their relationships. Couples participating in Becoming One reported greater trust and intimacy, less depression, improvements in sexual intimacy, and more time spent together. Couples who participated in counseling were also more likely to engage in joint financial planning and less income hiding practices.

The positive effects, both on the reduction of violence and on couple dynamics, were closely linked to improvements in the couple's communication and conflict resolution skills. Couples reported fewer arguments, and the arguments they did have were resolved using positive communication strategies.

Some Leaders Produced Greater Impacts Than Others

Given that program content may be counter to traditional values, the research team conducted random audits of sessions to monitor faith leader performance. By combining data from these audits, and interviews with faith leaders themselves, researchers found that leaders with the highest progressive views, who also engaged with the material, produced the greatest changes. Among these leaders, violence decreased by more than 20 percentage points (about 17 percentage points more than the reductions achieved by their peers), with similar increased improvements in other relationship measures. 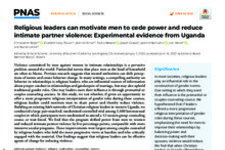