Examining the Effects of Crop Price Insurance for Farmers in Ghana

Policy Issue
Many small-scale farmers in the developing world face significant income uncertainty, and rural farmers who live from harvest to harvest don’t have much room for error. Variables beyond the farmers’ control, such as fluctuating crop prices, can make a significant difference in how much a family earns for the year.  Farmers may be unwilling to take on additional risks by borrowing and making long-term investments due this uncertainty. This reluctance is thought to contribute to the decision of many farmers not to invest in technologies such as hybrid seeds, fertilizer, or irrigation that could potentially improve crop yields. Many lenders are also extremely wary of extending credit to farmers, fearful that they will inherit the risks inherent to farming. Crop price insurance could help solve this problem, reducing the risk to farmers and providing them with encouragement to make investments in their farms. Lenders, too, may feel more confident in lending to farmers with greater income certainty, facilitating even more capital investments.
Context of the Evaluation
In Ghana, 50 percent of the rural population lives in poverty. In the Eastern Region where Mumuadu Rural Bank (MRB) operates, an estimated 70 percent of households make a living in the agricultural sector, but agricultural loans make up only 2 percent of the bank’s loan portfolio. Focus groups with maize and eggplant farmers in the area revealed that farmers were hesitant to borrow for fear that fluctuations in crop prices could force them to default. Rainfall fluctuations, typically an important source of risk for farmers, are not a great concern in this part of Ghana. The prices offered for traded crops, however, do fluctuate greatly. Information gathered in baseline surveys suggested that there was a potential but untapped market for crop price insurance: farmers in the area served by MRB expressed that they would be willing to pay to guarantee a certain minimum crop price. Despite this encouraging baseline finding, banks and insurance providers face the challenge that insurance is not a commonly understood concept among farmers in the region.
Details of the Intervention

Researchers developed an agricultural loan product in coordination with MRB that had an insurance component that partially indemnified farmers against low crop prices. Specifically, if crop prices at harvest dropped below a set price floor (the 10th percentile of historical prices for eggplant and the 7th percentile for historical maize prices), the bank would forgive 50 percent of the loan and interest payments. Borrowers were not required to pay any premium for the insurance product. The goal of incorporating insurance into the loan product was to reduce farmers’ risk in borrowing to invest in agriculture inputs. The intervention targeted maize and eggplant farmers in particular because the crops are both commonly grown in the region and subject to volatile (but historically well documented) prices.

Standard Mumuadu procedure is to invite farmers to meet in a group with Mumuadu employees to discuss the bank’s financial services, and to encourage farmers to come to a branch to apply for a loan. The average loan size is approximately US$159, which represents a significant change in cash flow for the borrower. For this project, Mumuadu employees approached community leaders to obtain a list of all maize and eggplant farmers in the village. The same community leaders then invited farmers to attend one of the bank’s information sessions. Farmers on the list were randomly assigned to one of four groups, each of which received a variation on the Mumuadu marketing pitch. The four groups were:

Prior to the marketing of the loans, Mumuadu employees conducted a survey of the farmers, gathering information relating to their credit history, risk perception, financial management skills, and cognitive ability. An analysis of baseline data, bank administrative data, and a followup survey that focused on farmer investment decisions allowed researchers to draw conclusions on the effect of crop price insurance on borrower behavior and agricultural investment in Ghana.

Results and Policy Lessons
Take up of loans among farmers was quite high, with 86 percent of farmers in the comparison groups choosing to borrow and 92 percent of farmers in the treatment groups taking out a loan.  This high take up across both treatment and control groups made an analysis of the features that predicted take up difficult.  In fact, the researchers found no systematic difference across the treatment and control groups when considering which features predicted borrowing. Overall, those who borrowed tended to be older, with higher scores on tests of cognitive ability.  They were also more likely to have a record of previous borrowing.
Apart from predictors of borrowing, researchers were interested in whether crop price insurance changed farmers’ investment behavior. There is evidence that it did, but not overwhelmingly. The small sample and high take up across both groups may have played a role in this outcome. Farmers offered the insurance spent 17.9 percentage points more on agricultural chemicals (mostly fertilizer) than those who had not been offered the product. There was also a trend towards growing more eggplants and less maize among these farmers. Farmers offered the insurance were also between 15 and 25 percent more likely to bring their produce to markets rather than sell to brokers who come to pick up the crop. Anecdotally, it is believed that the so-called “farmgate” sellers offer guaranteed purchase contracts, but at lower prices locked in before harvest. Selling in the market, on the other hand, is a potentially more profitable but riskier option.
There are a number of potential reasons why the researchers did not find large effects of the crop price insurance product on either or take up or investment, and further research in necessary to determine their roles. It is uncertain, for example, whether farmers truly understood the benefits of the insurance. Farmers may also have been reluctant to make long term investments changes before an insurance product demonstrates an established presence in the area. Alternatively, crop price uncertainty may not be as important of an indicator of investment decisions as previously thought. Further research, with a larger sample size, is needed to better understand the roles of risk, financial literacy, and product design in determining microinsurance impact. 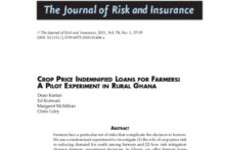