Does Community-Based Development Empower Citizens? Evidence from a Randomized Evaluation in Ghana

Community-based development is an idea that has gained popularity among governments, practitioners, and funders, but evidence on its effectiveness outside of post-conflict contexts is limited. Researchers conducted a randomized evaluation to test the impact of community-based development on political participation, public goods provision, and individual well-being in Ghana. They found that, although the community engagement program led to changes in local leadership, it was not an effective way to increase public goods provision or socioeconomic status.

Community-based development (CBD) is an approach to implementing local development projects that advocates for community participation in decision-making and management, with a goal of using local knowledge and resources to run more effective projects. There are multiple pathways for this participatory approach to contribute to communities’ well-being. First, CBD may increase resources directed to programs important to the community and may improve efficiency of expenditures. CBD may foster leadership skills and community engagement at the local level. By encouraging communities to work together towards a shared goal, CBD may increase social networks, trust, and future contributions to community-level public goods. Finally, by helping citizens build leadership skills and exposure to the political process, CBD may improve communities’ abilities to demand more effective support from higher levels of government. Despite these three potential pathways for CBD to improve well-being, there is debate about whether community participation actually improves the outcomes of these programs.

Existing evidence on CBD comes mainly from post-conflict settings and focuses on its impact on local governance, often with disappointing results. However, in low-income settings where a well-established central government controls significant resources, improving communities’ abilities to advocate for themselves at higher levels of government could improve both governance and broader socioeconomic outcomes.

Ghana is a lower middle income country that has not faced civil conflict since its independence in 1957. In 2013, Ghana was ranked among the top ten most effective states in sub-Saharan Africa.1 In Eastern Ghana, where this evaluation was carried out, rural villages are led by village chiefs, a position that is traditionally hereditary. Village chiefs do not receive budgets from the government, and thus activities carried out at the village level rely on community members’ voluntary contributions of funds.

The district is the lowest level of government in Ghana with the ability to collect taxes and define a budget. Each of Ghana’s districts contains multiple villages. District governments are responsible for the provision of basic education, primary health care, local roads, environmental protection, water, and sanitation. Each district is led by a district chief executive and a district assembly that is elected by the district residents. The district chief executive is appointed by Ghana’s president and approved by the assembly.

Researchers conducted a randomized evaluation to test the impact of CBD on civic engagement at the village level, individual participation in district governments as either a voter or a candidate, investment in local public goods, and socioeconomic factors including food security, education, and health. The researchers partnered with The Hunger Project (THP), an international organization that mobilizes communities to work together and engage constructively with local government. THP implements a CBD program called the Epicenter Strategy. A major component of this strategy is the organization of workshops in which community members and district government officials develop community action plans. In communities where members demonstrate a commitment to devoting time and resources to projects that will benefit the community, THP provides financial and logistical support to create community “epicenters.” Each epicenter building houses a clinic, a microfinance bank, a three-acre farm, a food storage unit, and either a preschool or library. Community members are expected to devote significant cash or in-kind resources to the center’s construction.

This study was conducted in thirteen of the seventeen districts in Ghana’s Eastern Region. Researchers first identified eligible villages for the study; to participate, a village had to have a population less than 2,000 and could not be on a main road. These villages were then divided into 97 geographically-defined village groups of approximately 10,000 people each. In each district, a public lottery was held to determine which village groups would be invited to participate in the Epicenter Strategy. In total, 51 village groups were invited to receive the program.

While THP’s programming did lead to changes in the quality of village- and district-level leadership, it did not increase investment in public goods and did not improve socioeconomic outcomes. These results suggest that local-level institutional reforms may not be an effective way to reduce poverty.

Take-up and implementation: Only 28 of the 51 invited village groups decided to participate in the Epicenter Strategy. Twenty-five of these village groups successfully constructed epicenter buildings.

District-level results: Voter turnout for district elections was ten percent lower in THP communities than in non-THP communities, where turnout was fifty percent. On the other hand, more individuals from THP communities ran for membership in the district assembly than from communities in the comparison group. District assembly members from THP villages were also more likely to meet with community leaders and voters. The district government was more likely to finance projects in sectors that were not addressed by THP (education, roads, power, and agricultural processing) but less likely to finance projects in sectors that were (health, water, sanitation, childcare, and microfinance).

Socioeconomic outcomes: THP aims to improve five outcomes: food security, education and literacy, health and nutrition, environment, and economic livelihoods. There was no significant difference between THP and non-THP villages along any of these five dimensions. 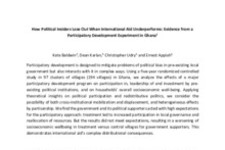 How Political Insiders Lose Out When International Aid Underperforms: Evidence from a Participatory Development Experiment in Ghana