Consulting and Capital Experiments with Microenterprise Tailors in Ghana

Microenterprises make up a large portion of employment in the developing world but little is known about constraints on their growth. Researchers partnered with the consulting firm Ernst & Young to test whether providing tailors in Accra with individualized consulting, a sizable cash grant, or both can facilitate growth. Initially, tailors experimented with investments and management practices, but most learned overtime that these new business strategies were not profitable for their ventures. Some tailors, however, did experience positive outcomes—evidence that entrepreneurial talent varies among individuals and an individual’s talent may not be readily known, even to the entrepreneur herself.

In many low-income countries, small and medium enterprises collectively employ more of the workforce than large firms in formal sectors.[i] Small and medium enterprises (SMEs) are thought to be an important source of innovation and employment due to their flexibility in responding to new market opportunities and their potential for growth. However, very little is understood about the constraints to SME expansion. A lack of cash may prevent entrepreneurs from making investments. Or, they may not possess the business knowledge to effectively manage their venture. Can capital grants and training in management practices boost the growth of a microenterprise?

In 2004, businesses with fewer than 99 workers (commonly called small or medium enterprises), employed around two-thirds of Ghana’s work force.[i] These small and medium enterprises (SMEs) are typically diverse in product offerings, ranging from agricultural produce to crafts to tourism services.

Ernst & Young, an international business consulting firm, works in assurance, tax, transaction, advisory services, and strategic growth markets. In Accra, Ghana, Ernst & Young worked with tailors in eight neighborhoods, all of whom operated microenterprises employing five or fewer people. Thirty-five percent of these businesses had no employees at all. Less than 18 percent had ever taken a formal loan and 17 percent kept written financial records.

Researchers partnered with Ernst & Young to test whether providing urban micro-entrepreneurial tailors with consulting, capital, or both can facilitate enterprise growth. The 160 tailors in the sample were randomly assigned to one of three treatment groups or a comparison group.

Consulting Group: Consultants from Ernst & Young met with the tailors on an individual basis in the tailors’ shops, anywhere from one to four times a month between February 2009 and February 2010. Each tailor received an average of ten hours of consulting over the year. Consultants worked with the tailors through business management training modules, such as recordkeeping and customer service, at an individualized pace.

Cash Grant Group: Eight months into the intervention, in October 2009, tailors in the cash grant group received a grant of 200 Ghana cedis (GHC) (US$138.90) to invest in their businesses. The grant represented a considerable amount of capital, equal to roughly twice the amount of cash the average tailor reported to have available for investment.

Combined Consulting and Cash Group: Tailors in the combined group received both the year of consulting services beginning in February 2009 and the cash grant in October 2009.

Comparison Group: The comparison group did not receive consulting services nor a cash grant.

To measure the impact of the consulting services and capital grant on tailors’ business practices and their profits, researchers conducted eight rounds of surveys with participants between December 2008 and December 2010. Adherence to the consultants’ advice was measured by a management practice score that reported the proportion of good practices the tailors followed. In each round of surveying, researchers asked tailors whether they applied certain recommended practices, selected from a list of 35. While all tailors responded to the same questions, the selection of practices varied in each round.

Neither the cash grant, consulting services, nor the combination led to significant business growth for the tailors.

Business Practices: Tailors who worked with consultants adopted better management practices, but only temporarily. After six months, the tailors that received consulting services increased their use of good practices by 5.7 percentage points from a baseline score of 40 percent (a 14 percent increase). But the application of the business lessons did not persist. A year after the consulting ended, there was no difference in management practices between the consulting or combined groups and the comparison group.

Capital Flows: Net financial flows (in terms of investment, savings, and loans) increased in the cash grant and combined group immediately following the grant, by GHC 326 (US$226.40) and GHC 229 (US$159) respectively. The consulting group did not report larger financial flows. However, similarly to the pattern observed in business practices, one year later the size of capital flows for the cash grant and combined group fell to the level reported by the comparison group. That the increase was confined to the tailors who received grants, with no effect on the consulting only group, suggests that a lack of cash constrained tailors’ activities to promote business growth.

Profitability: Consulting did not stimulate profits and the capital grant seemingly lowered profits in the long term. At the end of the study, the tailors in the cash grant group earned GHC 45 (US$31.30) less than the GHC 146 (US$101.40) earned by the comparison group, a 31 percent decrease. There was no significant effect on profits in the consulting or combined groups at the study’s conclusion.

The pattern in profits over time suggests that the interventions may have allowed tailors to experiment with their business practices, but they abandoned the new strategies after learning the changes were not profitable, leading to diminishing effects in good business practices and capital flows. This may suggest that business best practices are only beneficial for entrepreneurs who can implement them effectively. Consultant-recommended practices, such as formal bookkeeping and “sew and sell”—where the tailor sews a garment without a specific client in mind in the hope of selling later—may have been profitable for some particularly talented tailors, but may have reduced profits for less-skilled entrepreneurs. Similarly, capital investments may not have paid off for tailors who made uninformed or poor decisions.

Some tailors, however, did see positive impacts. But, identifying such individuals in advance of the interventions based on observable characteristics is difficult.  Entrepreneurial talent varies widely among individuals and an individual’s level of talent may not be readily known, even by the entrepreneur herself.

More research is needed to develop means to target entrepreneurs with latent talent that would benefit from encouragements to grow. In the absence of targeting mechanisms, policy aimed at spurring growth for entrepreneurs and involving capital and consulting may result in mixed outcomes at best. 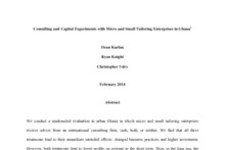