Borrower Responses to Fingerprinting for Loan Enforcement in Malawi

Policy Issue
Identity theft is a common crime the world over. In developing countries, the damage caused by identity theft and identity fraud goes far beyond the individual victim, however, and ultimately creates a direct impediment to progress, particularly in credit markets. Biometric technology can help to reduce these problems. A biometric is a measurement of physical or behavioral characteristics used to verify or analyze identity. Common biometrics include a person’s fingerprints, face, iris, or retina patterns; speech; or handwritten signature. These are effective personal identifiers because they are unique and intrinsic to each person, so, unlike conventional identification methods (such as passport numbers or government?issued identification cards), they cannot be forgotten, lost, or stolen.
Biometric technology can improve access to credit and insurance markets, especially in countries that do not have a unique identification system to prevent identity fraud—the use of someone else’s identity or a fictitious one to gain access to services otherwise unavailable. In the case of credit, biometric technology can make the idea of future credit denial more than an empty threat by making it easier for financial institutions to withhold new loans from past defaulters and reward responsible past borrowers with increased credit.
Context of the Evaluation
With 80% of its population residing in rural areas, Malawi’s economy is focused on agriculture.1 In these rural areas where there is limited access to credit, farmers, often have difficultly investing in agricultural inputs such as fertilizer that can dramatically increase harvest size.
To fill this gap in demand for credit, Malawi Rural Finance Corporation (MRFC), a government-owned microfinance institution, provides a loan product designed for farmers purchasing “starter kits” from Cheetah Paprika Limited (CP). CP is a privately owned agri?business company that offers extension services and a package of seeds, pesticides, and fungicides at subsidized rates in exchange for farmers’ commitment to sell the paprika crop to CP at harvest time. The MRFC loans, roughly 17,000 Malawi Kwacha (approximately US$120), come in the form of vouchers, allowing borrowers to collect inputs from pre-approved suppliers who directly bill MRFC. Expected yield for farmers using two bags of fertilizer, the maximum quantity covered by the loan, on one acre of land is between 400?600kg, compared to 200kg with no inputs.
Details of the Intervention
Smallholder farmers organized in groups of 15?20 members applied for agricultural input loans to grow paprika and were randomly allocated to either a treatment or comparison group. The study sample covered four districts of the country and consisted of 249 clubs with approximately 3,500 farmers. In keeping with standard MRFC practices, farmers were expected to raise a 15% deposit, and were charged interest of 33% per year (or 30% for repeat borrowers).
After the baseline survey was administered to individual farmers gathering information about demographics, income, assets, risk preferences, and borrowing activities, a training session was held for all clubs on the importance of credit history in ensuring future access to credit. Then, in treatment clubs only, fingerprints were collected as part of the loan application and an explanation was given that this would be used to determine their identity on any future loan applications. Farmers in treatment clubs were given a demonstration of how a computer could identify an individual with a fingerprint scan. In the absence of fingerprinting, identification of farmers relied on the personal knowledge of loan officers.
MRFC loan officers, informed of which groups were fingerprinted, proceeded with normal loan application screening and approval. An endline survey was administered after the harvested crops were sold to CP.
Results and Policy Lessons
Within the subgroup of farmers who had the highest default risk, based on risk taking and default behavior, fingerprinting led to increases in repayment rates of about 40 percent. In contrast, fingerprinting had no impact on repayment for farmers with low default risk.  Fingerprinted borrowers requested smaller loans amounts and devoted more land and inputs to paprika, thus diverting fewer resources to other crops compared to their non?fingerprinted counterparts.
A rough cost?benefit analysis of the pilot experiment suggests that the benefits from improved repayment greatly outweigh the costs of biometric equipment and fingerprint collection, which accounts for basic training and the time for credit officers to collect biometric data. The benefit?cost ratio is 2.27.
This study suggests, therefore, that lending institutions may reap benefits by using biometric technology to identify borrowers and enforce loan repayment. 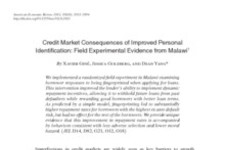 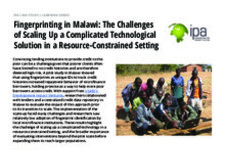 Fingerprinting in Malawi: The Challenges of Scaling Up a Complicated Technological Solution in a Resource-Constrained Setting