Backing out of Commitment Devices in Malawi

Commitment savings products are a useful tool to help individuals with self control problems stick to their financial plans, but they are unnecessarily restrictive for individuals who want to back out of their commitments due to an unanticipated change in income or other household shock. To shed light on the mechanisms behind the failure to adhere to financial plans, researchers carried out a lab-like study in Malawi that mimicked real life choices. The study measured how often participants changed their financial plans, and what prompted those changes. When participants back out of financial commitments, is it due to self control problems or other factors such as spousal pressure, household shocks, or a lack of understanding about what the commitment entailed in the first place?

Commitment savings accounts have been used to increase savings and investment in economies as diverse as the United States, the Philippines, and Malawi.  These accounts are designed for customers who experience self-control problems and have trouble following through on their own plans to save money.  However, if people change their financial plans for other reasons, related to changes in income household needs, for example, then commitment savings accounts may actually make them worse off by reducing their flexibility to cope with shocks or correct mistakes. Therefore, to improve the design and targeting of these products, more evidence is needed on why some individuals do not follow through on their own financial plans.

This evaluation studied the frequency with which individuals change financial plans made under commitment, and investigated whether revisions are correlated with time inconsistent preferences or other factors, including social or spousal preferences, unexpected changes in finances, or mistakes in planning for the future.  Such information can be used to improve the design and marketing of commitment savings devices as one of a portfolio of products to help people manage their income and consumption.

Malawi’s economy is heavily dependent on agriculture. Most farmers have one harvest a year, and they need to save in order to smooth consumption over the year as well as invest in agricultural inputs for the next planting season. However, many farmers are unable to achieve their own savings goals and use less fertilizer than they planned.  Research suggests that commitment savings accounts may make it easier for farmers in Malawi to save for the next planting season, and that these accounts can have positive impacts on the amount of planting for the next season, sales from the next harvest, and consumption after harvest. However, more evidence is needed to understand why farmers have trouble following through on their plans, and whether commitment accounts are the most appropriate tool to help them.

This project took place among Malawian tobacco farmers.  Tobacco is Malawi’s most important cash crop, and the return to investments in fertilizer is high for tobacco farmers.  The median participant was 46 years old, had four years of formal education, and lived in a village with 120 inhabitants. He had zero formal savings, and household assets worth approximately US$30.

Researchers carried out a two-stage field study that mimicked real life choices, using real stakes, to determine what motivates farmers to revise their prior choices and back out of commitments to save. The sample included husband-wife pairs in 1,071 households for a total of 2,142 respondents. Of those, 661 households were randomly selected to participate in stage two of the study.

In the first stage of the experiment, all respondents made a series of 10 choices about how to allocate money between “sooner” and “later” time periods.  Money allocated to the “later” time period earned interest, which provided an incentive for patience.  Half of the choices pertained to a near-term time horizon:  receiving money one day or one month and one day after the interview.  The other half of the choices were in the “far” horizon and pushed the trade-off into the future:  either two or three months from the interview.

Decisions in this stage were used to measure respondents’ tendencies to be more patient about decisions in the future than the present, which is an indication of time-inconsistent preferences.  To give respondents the incentive to take the choices seriously and to set up the second stage of the study, households received vouchers redeemable for cash in accordance with one randomly-selected decision among 20 total (10 each for husband and wife) that the household made.  One voucher was issued for the amount of money that had been allocated to the “sooner” time period and a second voucher was issued for the money that had been reserved for “later.”  Each voucher could be redeemed for cash on or after its maturity date.  The amount of money was substantial, equivalent to about one months’ wages.

For 661 households, the decision for which the two vouchers were issued was a far-horizon trade-off, with vouchers redeemable two and three months after the initial interview.  While the initial allocation had been made under commitment, households were unexpectedly revisited shortly before the first voucher could be redeemed and given the opportunity to reallocate the money between the two payment periods if they wished. The change between the initial and revised allocation thus measured the tendency to revise financial plans made under commitment.

Surveys of all respondents at each stage measured household wealth and income.  During the initial survey, additional indicators of financial sophistication and expectations of future income were included.  In the second stage, respondents were asked about any changes in their expected income or unanticipated changes to their financial situations.

Eighty-one percent of the decisions made in the first stage were consistent with the law of demand. That is, individuals typically allocated more income to later periods when offered higher rates of return for waiting. This suggests that the majority of respondents understood the tradeoffs they faced.  While respondents were sensitive to interest rates, they also displayed considerable time-inconsistency, making different choices over the near than the far horizon.  While these static preference reversals were frequent, they were only slightly more likely to be present-biased as opposed to future-biased.

In the second stage, researchers found that revisions were common, often substantial in size, and that while some participants became more impatient and shifted money forward towards the “sooner” voucher, others became more patient and shifted money backwards towards the “later” period.  The first set of revisions, towards the sooner period, are the classic form of time inconsistent behavior that undermines savings and can be managed through products like commitment savings accounts.  Crucially, these revisions were predicted by present-biased preferences as measured in the first stage of the experiment, but not by other factors like changes in expected income, deaths in the household, financial sophistication (a proxy for mistakes), or pressure from one’s spouse.  People were also more likely to make present-biased revisions when they were revisited closer to the date on which the first voucher could be redeemed.

Together, these findings are significant because they suggest that many instances of revising financial plans are due to time-inconsistent preferences rather than other factors.  Commitment savings accounts are useful tools for individuals who have present-biased preferences, but may be harmful for people who change plans for other reasons.  This study confirms an important role for commitment savings accounts as one way for people in developing countries to manage their consumption and savings.

However, present-bias is far from universal in this population, and policy design must take account of this heterogeneity. Efforts to help some combat temptation must avoid saddling others with commitments they do not need. 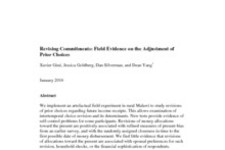 Revising Commitments: Field Evidence on the Adjustment of Prior Choices