Addressing Bias by Promoting Women to Management Positions in Bangladesh

In recent years, the ready-made garment sector in Bangladesh has experienced rapid growth. Overall, most of these new jobs have gone to women, yet few women have been hired as managers. Researchers randomly assigned co-supervisors to production lines to evaluate the impact of exposing garment factory workers and supervisors to women managers on factory productivity, supervisor retention, and attitudes toward women. Several months after the intervention, there was no difference in productivity between lines managed by women and men, a higher rate of women promoted to supervisor relative to comparison factories, and more accurate ratings of women’s managerial abilities.
Policy Issue

Evidence shows that women are not promoted to managerial positions at the same rate as men who perform equally well. Yet, there is limited evidence on the specific mechanisms that result in this discrimination. One possibility is that promotion decision makers may prefer to promote a man over a woman, all else equal. Another possibility is that discrimination may occur as a result of inaccurate perceptions of women’s abilities—seemingly objective performance measures are likely to underestimate women managers’ performance in contexts where their workers doubt them or ignore their orders.

Evidence from India suggests that exposure to women leaders can improve constituents’ perceptions of the effectiveness of women as leaders and subsequently improve their electoral chances. Further research has also shown that having women leaders can lead to improved community outcomes. Here, researchers ask: can promoting women to management roles improve factory productivity and lead workers and managers to update their beliefs about women’s effectiveness?

Garment manufacturing has played an important role in industrialization. In Bangladesh, where this study was conducted, the garment manufacturing sector has grown from a handful of factories in the 1980s to employ around four million people. According to a 2011 report, the sector accounts for an estimated 12 percent of Bangladesh’s exports and about 80 percent of its GDP.

In the Bangladeshi garment manufacturing sector, women account for approximately four in five workers, but only one in ten managers. This inequity arises even though almost all managers are promoted from among the workers. In addition to being unethical, discrimination against women may be contributing to a shortage of qualified managers, holding back industrial growth in Bangladesh.

Researchers worked with 24 large locally owned and managed garment factories in and around Dhaka, Bangladesh’s capital and largest city to conduct this study. Each study factory has anywhere from 12 to 100 mostly autonomous production lines, each with about 20 to 60 production workers per line. Line supervisors oversee between 5 and 20 workers, and many lines have multiple co-supervisors working together.

In the study factories, baselines surveys show that factory employees inaccurately rate women as worse supervisors relative to men. For example, participants rate women as having less knowledge of machines then men, for which there is no evidence. These views persist throughout the hierarchy, but are more pronounced among men who are potential subordinate workers.

Researchers randomly assigned co-supervisors to production lines to evaluate the impact of exposing garment factory workers and supervisors to women managers on factory productivity and attitudes toward women, and to understand whether factories were promoting women at an optimal rate.

Researchers requested that each of the 24 factories select an equal number of men and women to receive six weeks of high-quality, classroom-based supervisor training from the German Development Corporation (GIZ). The training was free to firms and participants, and participants were paid their normal wages during the training.

The factories put forward 121 women and 100 men for training. A number of potential participants dropped out or were eliminated, including 21 women who did not participate in the training course because they did not want to become supervisors or because of resistance from family. The final sample included 73 women and 72 men training to become co-supervisors.

On average, trainees had approximately eight years of education, six years of garment industry experience, and three years of experience in the factory where they currently worked. Before the six-week, classroom-based training, women and men scored the same on an 86-question test of technical knowledge. Women trainees had lower numeracy scores and lower confidence in their ability as managers than men in the study, although this gap in confidence shrank by the end of the training.

The research team collected data to track three primary outcomes: line productivity, supervisor retention rates, and co-supervisor and worker reviews, in addition to some secondary outcomes, such as product defect rates. Researchers collected data from trainees, other workers, and current supervisors in four survey rounds, and gathered administrative data on productivity from factories. The productivity data covered 12 months, but did not include factories that provided data of insufficient quality.

Researchers also conducted a “lab-in-the-field” management simulation exercise to measure trainees' productivity when matched with randomly selected workers. In this part of the study, 169 co-supervisor trainees from 48 similar factories also received six weeks of training and two months of management experience, however, trainees were not randomly assigned to production lines. The research team randomly assigned each trainee two workers from their factory. Each trainee was asked to teach the workers two tasks, one familiar and one unfamiliar both to trainees and workers, and was rewarded based on the workers’ outputs.

The researchers conclude that factories may promote women at a lower rate than men because of excessively negative beliefs about women as supervisors among workers and managers. They note that lower initial performance among female co-supervisors can be attributed to the lower level of authority that workers are willing to afford female co-supervisors. Targeted subsidies to employers to promote more women to management positions and expose workers and managers to female leadership, leading to more accurate perceptions of their abilities, may help reduce future bias against women managers. 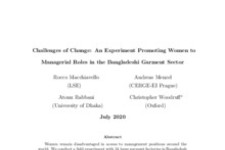 Challenges of Change: An Experiment Promoting Women to Managerial Roles in the Bangladeshi Garment Sector