Incentives for Seasonal Migration and Food Security in Bangladesh

Seasonal hunger affects 300 million of the world’s rural poor. Seasonal migration can help some people find temporary employment, but many of those who could potentially benefit from migration face financial constraints that prevent them from traveling during the lean season. Researchers investigated whether providing low-cost travel incentives increases migration, and whether migrants experience better food security as a result of their travel. Incentives induced more people to migrate to nearby urban areas, and the families of those who did ate better during the famine season than those who did not receive incentives to migrate.

Three hundred million of the world’s rural poor suffer from seasonal hunger, which often occurs between planting and harvest when the demand for agricultural labor falls and the price of food rises.1 Those affected miss meals for a two- to three-month period, which is especially problematic for young children because poor nutrition for even a short time can limit their development in the long run. In places where agricultural workers must rely on crops for their livelihood, seasonal migration from rural to urban areas can help families increase their income and food security. That some people choose to stay behind and risk famine indicates that there may be barriers to migration, such as financial constraints, lack of information about urban job opportunities, or a desire to remain with family. This research investigated whether providing low-cost incentives for seasonal migration is a cost-effective way to help people overcome these barriers.

Researchers worked with Palli Karma Shohayok Foundation (PKSF), a microcredit organization working in the Rangpur region of northern Bangladesh. Close to 50 percent of Rangpur’s 15.8 million inhabitants live below the poverty line and experience a seasonal drop in income and food security, known locally as Monga, which occurs between the planting and harvesting of rice. Nearby urban and semi-urban areas do not face the same seasonal downturns, and these areas also offer low-skilled employment opportunities year-round. Yet, while 22 percent of all Bangladeshi households receive domestic remittances, only 5 percent of households in Rangpur do, indicating that many of those affected by Monga in Rangpur do not take advantage of the opportunities that migration offers.

Innovations for Poverty Action worked with researchers to evaluate the impact of small cash grants, offered as an incentive to migrate for work, on on migration, income, and food security. An expansion of the randomized evaluation also measured whether offering incentives to a larger proportion of people in a village encouraged more people to migrate, compared to offering incentives to only a small percentage of people in a village.

Researchers randomly assigned 100 villages (1900 households) to one of four groups:

Information (16 villages/304 households): Representatives from PKSF and its partner NGOs went to households and gave potential migrants information about the types of jobs available in urban locations, the likelihood of getting each job, and approximate wages.

Cash incentive (37 villages/703 households): In this group, households received the same job information as in the information group, but were also offered 800 Bangladeshi takas ($11.50) in cash, conditional on their migrating. Six-hundred takas ($8.50, which covers the round-trip travel cost) were given before the migration season and 200 takas were given once the migrant reported to the research office at his or her destination.

Credit incentive (31 villages/589 households): In this group, households received the same information about jobs and migrating as in the other two groups, but were also offered an 800 taka zero interest loan, conditional on their migrating. Six-hundred takas were given before the migration and 200 takas were given once the migrant reported to the destination.

Comparison (16 villages/304 households): Households in this group did not receive any information or incentives.

Households offered an incentive to migrate were more likely to send someone to work outside the village for the hungry season, and migrant families had significantly better food security.

Food security: Households that sent a migrant benefitted: in the cash incentive households, consumption increased by about 97 taka per household member per month, which represents about a 10 percent increase over consumption in the comparison group. People who received the cash incentive also consumed on average 106 more calories a day than those in the comparison group.

These results suggest that offering households a small amount of money, conditional on their sending a migrant, can increase seasonal migration and food security for famine-affected areas. These incentives are more effective when they are given to a larger group of people in a concentrated area. Researchers believe that the small incentive allows very poor families to mitigate the risk that migration might not resulted in more income or employment. For those living in extreme poverty, even a small amount of money on a wasted bus ticket can be too much of a risk. Having a larger proportion of friends and family from the home village migrating together further reduces these risks of migration, as the migrant is able to bring his or her safety net along to the migration destination. This also indicates that the program the cost-effectiveness of the program when scaled up: offering travel incentives to greater numbers of people increases migration and food security for more people, even those not directly receiving the incentive. 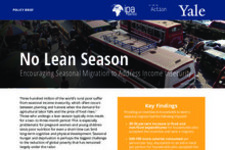 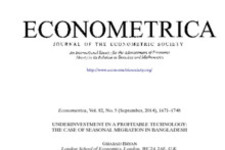 Under-investment in a Profitable Technology: The Case of Seasonal Migration in Bangladesh