Saving for Health Expenditures in Kenya

Health remains a major barrier to economic development in poor rural areas. Access to effective health products, whether preventive or curative, has so far remained limited due in large part to poverty and the absence of financial markets that would enable poor households to invest in health on credit. Given such constraints, poor households should save in anticipation of future health shocks. However, substantial evidence suggests that they lack adequate savings products, and, as a result, households are quite vulnerable to health shocks. In order to afford medical expenditures, they resort to drawing down productive assets or business capital or to other costly risk-coping strategies.

The benefits of investing in health are thought to be very high. For example, it has been estimated that 63 percent of under-5 mortality could be averted if households invested in preventative health products. Despite this, investment levels remain quite low in many developing countries. While many people point to credit constraints as the primary impediment, barriers to savings also appear to be a significant obstacle to investing in health. There are several major pathways through which savings may be constrained. Inter-household barriers may be relevant if social norms that necessitate that an individual provide support to friends and relatives if she is asked and has the cash on hand. Intra-household barriers may arise if members of a household have different spending preferences. Intra-personal barriers may arise if an individual’s saving and spending preferences are not constant over time. It is necessary to better understand these pathways and their relative importance so that we may develop more efficient health saving devices.

The researchers chose to work with a common social structure in the area: a ROSCA (Rotating Saving and Credit Association) - a group of individuals who make regular cyclical contribution to a fund, which is then given as a lump sump to a different member at each meeting. Recent studies reveal very high participation rates in these organizations; across Sub-Saharan Africa, average membership among adults ranges between 50 and 95 percent.1

To estimate the relative importance of the different types of barriers to savings, the researchers randomly varied access to a set of saving devices specifically designed to alleviate one or more of the barriers discussed above. One hundred and thirteen ROSCAs were randomly assigned to five groups: four of the groups were given specific savings devices to use in addition to their regular weekly savings, while the fifth group served as a comparison.

In the first two treatment groups, members of the ROSCAs were given a locked metal box (with an opening in which deposits could be made) in which they could save at home. In the first group – the “Safe Box” group – members were given the key to the lock and could therefore take money from the box whenever they wanted, even to spend on non-health products. In the second group – the “Lock Box” group – members were not given the key and had to call the program officer in order to open the box. Once opened, the money in the box could only be used to buy health products.

The other two treatments were at the ROSCA level. In the third treatment group, individuals were encouraged to use their existing ROSCA to create a “Health Pot” in which members would contribute an additional amount during regular meetings earmarked for health products only. In the fourth group, individuals were encouraged to save in an individual “Health Savings Account” (HSA) that would be held at the ROSCA and earmarked for emergency health costs only (i.e. respondents were only allowed to withdraw this money if they needed it for a health emergency).

In all five groups, participants were encouraged to save for health savings goals. Thus, any effect of a savings product above and beyond the control group should be attributable to the product itself.

Overall, the results indicate a significant demand for such savings products. Take-up of all four treatments was extremely high, suggesting that the primary effect of all treatments is simply the provision of a mechanism to protect money from others.

In terms of health impacts, the researchers looked at two outcomes: (1) how much people invested in preventative health in the year following the program; and (2) whether people had enough money to deal with health emergencies. Note that the Lock Box and Health Pot were geared towards outcome (1), the Health Savings Account was geared towards outcome (2), and the Safe Box was geared to both outcomes.

Investments in Preventative Health: A year after the intervention, individuals in the Safe Box and Health Pot groups had significantly higher levels of investments in preventative health products than those in the comparison group. Relative to comparison group individuals, the Safe Box increased investment by 67 percent, while the Health Pot increased investment by 128 percent. As expected, the Health Savings Account had no effect on this measure. Surprisingly, however, the Lock Box had no effect either. This lack of an effect is because the value of tying up money towards health is outweighed by the cost of completely limiting liquidity (for instance, to deal with unexpected income shocks).

Coping with Health Shocks: Individuals in the Health Savings Account treatment were less vulnerable to unexpected emergencies. People in the Safe Box group also appeared somewhat less vulnerable, though the effects were not significant at conventional levels. As expected, there was no effect in risk coping in the two treatments groups that were not designed for emergency savings.

Prevalence of Savings Barriers: The results confirm the presence of all three types of savings barriers. First, inter-personal barriers are substantial - those who were previously giving assistance to others without receiving assistance in return benefited more than others. Second, intra-personal barriers also matter. Those whose savings preferences were not constant over time (as measured by survey questions) were not able to benefit from the Safe Box (because it was too easy for them to access the money). They also did not benefit from the Lock Box – this is because even though the savings in the box was illiquid, there wasn’t a strong incentive to actually put money into the box in the first place. However, they did benefit from the stronger commitment and social pressure to make deposits that was provided by the Health Pot. Third, there is some evidence of intra-household barriers. The effects of several of the interventions were larger (though not statistically significantly so) for married individuals. 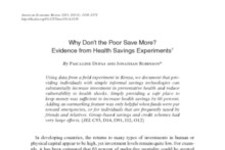 Why Don't the Poor Save More? Evidence from Health Savings Experiments

Using Mobile Platforms to Save for the Future: Evidence from Kenya
IPA BLOG | Jul 2, 2018
New World Bank Report Highlights IPA’s Research, Calls for Redesign of Development Policy
IPA BLOG | Dec 10, 2014
The Economist on commitment savings for the poor
The Economist | Sep 22, 2014
Interview with Dr. Esther Duflo, co-author of "Poor Economics"
Mobile Money for the Unbanked (MMU) | May 31, 2011
The next impact test for microfinance
IPA BLOG | Dec 31, 2009