Limited Insurance within the Household in Kenya

Individuals in developing countries are often subject to considerable financial risk, but most lack access to formal financial services that would allow them to insure themselves against unexpected income shocks like medical expenses or natural disasters. Instead, households often use informal systems of gifts and loans from friends or family to cope with large unplanned expenses. While these informal networks do provide some protection against shocks, they can also face problems of information asymmetry and payment enforcement. Many individuals may therefore attempt to cope with risk within the household where information sharing and enforcement are presumably easier. Whether intra-household insurance mechanisms are effective in insuring against risk remains, however, an important question. If members of a household do not insure each other against risk, then programs which impact the ability of individuals to cope with risk (such as formal savings accounts or microinsurance programs) could substantially increase people’s welfare.

The towns of Busia, Sega, and Ugunja in Western and Nyanza Provinces of Kenya are semi-urban areas located along a major highway. Though many people in the area earn their living from agriculture, a substantial fraction earns at least some income from self-employment. The individuals in this study were drawn from a group of daily income earners (men who work as bicycle taxi drivers - called boda bodas in Kiswahili - and women who sell produce and other items in the marketplace). Daily income earners were targeted in this study because their informal employment made them more susceptible to transitory income shocks.

A very small minority of the sample had access to formal savings: just 2 percent of men and 1 percent of women had savings accounts. However, informal savings and credit sources were common. Sixty-three percent of men and 44 percent of women participated in Rotating Savings and Credit Associations (ROSCAs) -a group of individuals who make regular cyclical contribution to a fund, which is then given as a lump sump to a different member at each meeting. Men and women were equally connected to informal credit groups (around 90 percent of both men and women received a loan in the past year and around 85 percent gave a loan).

This study presents results from a field experiment in Kenya designed to test whether intra-household risk-sharing mechanisms (such as financial transfers within the household) operate efficiently. One hundred and forty-two married couples were followed for eight weeks. Every week, each individual had a 50 percent chance of receiving a 150 Kenyan shilling (US$2) income shock, equivalent to roughly 1.5 days’ income for men and 1 week’s income for women. As these shocks were, by definition, random, the experimental design made it possible to test for efficiency by comparing theresponsiveness of private consumption to shocks received by an individual and to those received by his spouse. Assuming that household members were risk averse, failing to insure temporary shocks (such as those administered in this study) would leave potential gains from trade unexploited. For example, if a woman is sick, without insurance (i.e. a transfer from her spouse), she may be unable to see treatment and subsequently will be unable to work and make a daily income, and to fulfill her responsibilities as caregiver for her family, producing inefficiency in the household. If the household pooled risk efficiently, increases in private consumption should be the same for shocks received by an individual and those received by their spouse.

The shocks were announced to each spouse, so that it was not possible for one member of a household to hide an income shock from the other. Payments were made privately, however, and individuals were told that they could spend the money however they chose.

Each week both spouses were visited separately by a trained enumerator who administered a detailed monitoring survey that included questions on consumption, expenditures, income (and income shocks), labor supply, and transfers given and received over the previous seven days. In addition, a background survey and a survey to measure risk aversion were administered.

In contrast, for women, private expenditures did not respond to shocks (received either by herself or her husband). Women did, however, transfer 16.3 percent of the shock to their husbands, whereas husbands transferred none of their shock to their wives.

While the welfare consequences of failing to insure small shocks over a short time period are not likely to be very large, they suggest that intra-household risk-sharing mechanisms are ineffective, which could have important welfare effects. Overall, the findings suggest that programs which provide more formal risk coping mechanisms could have large effects on household welfare. 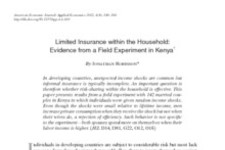 Limited Insurance Within the Household: Evidence from a Field Experiment in Western Kenya