Electoral irregularities—illegal activities seeking to influence elections—often threaten democratic institutions in low- and middle-income countries. In Colombia, researchers conducted a randomized evaluation to measure the impact of an intervention that encouraged citizens to report irregularities to a local NGO and varied whether candidates were informed about the reporting campaign. The campaign, conducted through Facebook, increased the number of reports people submitted and reduced the number of observed irregularities. This light-touch intervention was more cost-effective than other traditionally-used monitoring efforts that have cost-effectiveness data.

Clientelism, voter intimidation, and electoral fraud are part of the long list of electoral irregularities that persistently threaten democratic institutions in low- and middle-income countries.[1] Politicians draw on these different strategies, often combining several of them, to distort elections to their advantage. Beyond the direct consequences of undermining fair elections and eroding political accountability,[2] a growing amount of evidence has shown that different types of electoral irregularities also harm the economic and political well-being of countries.[3]

Digital communication technologies could help combat these irregularities more cost-effectively than traditional electoral monitoring strategies, such as sending out electoral observers or auditors. Governments and NGOs have recently leveraged digital platforms to monitor elections. However, there is a lack of rigorous evidence testing whether these platforms are effective in combating electoral irregularities.

Despite the presence of domestic and international observers and auditors, electoral irregularities are still common in Colombia. For example, a 2017 study found that 18 percent of Colombians sampled had, at some point in their lives, received some benefit in exchange for their vote or political support. Apart from vote-buying and voter intimidation, common irregularities include illicit political advertising, campaigning by public servants, fraud in voter registration, election disruption and electoral fraud.

In recent years, both the Colombian government and NGOs have made efforts to increase civil society’s engagement in overseeing elections through online reporting websites and applications. An example of these organizations is "Misión de Observación Electoral” (MOE), an independent, non-partisan NGO dedicated to electoral integrity. MOE hosts the most popular reporting website in Colombia called “Pilas con el voto” (translated roughly as “keep an eye on your vote”) which allows citizens to submit anonymous reports of electoral irregularities. Based on the information provided through this website, the MOE prepares official reports and redirects them to the government agencies in charge of investigating and sanctioning electoral irregularities.

In Colombia, researchers conducted a randomized evaluation of a massive Facebook campaign that had the goal of encouraging citizen monitoring of the 2019 mayoral elections through the website “Pilas con el voto”. The research team designed four variations of ads to understand the mechanisms through which the campaign could potentially affect reporting. Then, they randomly assigned 698 municipalities (more than half the country) to receive one of the following ads.

The campaign lasted five days and targeted all Facebook users 18 years or older. It began three days before the elections and ended one day after the elections.

To understand how candidates would react to this campaign and the potential impacts on electoral irregularities that knowledge of the campaign could have, the research team partnered with the Attorney General’s Office (AG) to send letters to a randomly assigned subset of candidates to inform them about the campaign.

To measure the impact of these interventions with mayoral candidates on electoral irregularities, researchers used two measures. First, they looked at mentions of these irregularities in a wide range of local and national news outlets. Second, they looked for discrepancies in Colombia's official voting records.

In addition to increasing the probability and number of reports, Facebook ads increased the probability of submitting a high-quality report (meaning the report contained hard evidence about the facts reported) by 8.3 percentage points and the number of high-quality reports by 0.17, which represent, respectively, a 53 percent and 87 percent increase compared to the comparison municipalities.

The ads containing the information of where individuals could report —the link to MOE’s website— seemed to be the ones driving these positive effects.

Electoral Irregularities:  Municipalities exposed to the reporting campaign experienced a reduction of 5.5 percentage points in the likelihood of having an irregularity mentioned in the media, and it decreased the probability of a measure of voting record discrepancies by 8 percentage points. The largest decline came from instances of vote-buying reported in the media—which is one of the most common types of irregularities in the Colombian context. 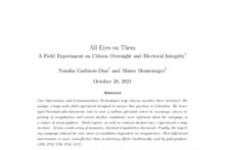 All Eyes on Them: A Field Experiment on Citizen Oversight and Electoral Integrity 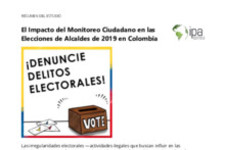