Many people in the developing world lack access to clean water.  Can providing clean water make kids healthier? Will children attend school more often? Will adults be able to work more regularly? We worked with the Government of Morocco to evaluate the impact of offering piped water connections at a subsidized price, and on credit. It turned out that there were no major health or educational benefits as most households already had access to free public taps, but people were willing to pay for a private tap at home, and the time saved walking to the tap made for more free time and higher self-reported happiness.

Households in developing countries spend considerable amount of time fetching water. The time-burden of water collection does not typically spare anyone in the household, but in many countries it is borne primarily by women and girls. Most interventions to connect poor households to the drinking water network are primarily concerned with improving physical health. Yet, over and beyond its direct effect on physical health, improved water access could have important effects on the household well-being. By reducing the time burden of water collection, improved water access not only frees up time that could be spent on additional leisure or production (paid labor or schooling), but also removes an important source of stress and tension. But it might also be welfare-reducing as women face restricted mobility outside of excursions to collect water. An in-home water connection could cut off an important opportunity to socialize.

In urban Morocco, the setting of this study, households that rely on public taps spend more than seven hours a week collecting water, despite a relatively high density of water taps. In our sample, 65% of households without a water connection report that water is a major source of concern: 15% have had a water-related conflict within the family and 12% with their neighbors. Thus, both within the family and between families, water seems to be the primary source of stress and tension.

J-PAL worked in collaboration with Amendis, the local affiliate of an international private utility company, which operates the electrical and wastewater collection networks as well as the drinking water distribution in Tangiers, Morocco. In 2007, Amendis launched a social program to increase access to piped water and sanitation. As of the end of 2007, approximately 845 low-income households living in “on-the-grid neighborhoods” of Tangiers (i.e. in principle easily connectable) did not have a household water connection because they could not afford the connection fee. These households had free access to public taps in their neighborhood, however, and they also all had sanitation facilities at home.

The program provided a subsidized interest-free loan to install a water connection. The loan was to be repaid in regular installments with the water bill over three to seven years. The subsidy did not cover the cost of installing the connection or the cost of water consumed. To pilot-test the program, a door-to-door awareness campaign was conducted in early 2008 among 434 households, randomly chosen from the 845 that needed a connection. Those households received information about the credit offer as well as help with the administrative procedures needed to apply for the credit. The remaining households (the comparison group) were eligible to apply for a connection on credit if they wanted to, but they received neither individualized information nor procedural assistance until 2009.

Since the participating households already had access to the water grid through free public taps, no improvements in the quality of water consumed by households have been found. Despite significant improvement in water quantity, no change in the incidence of waterborne illnesses was found. Nevertheless, households are willing to pay a substantial amount of money to have a private tap at home. Getting connected generates important time gains, but does not lead to increases in labor market participation, income, or schooling attainment. The spared time seems to be used for leisure and social activities.  Because water is often a source of tension between households, home connections appear to improve social integration. Overall, despite the financial cost, households’ self-reported happiness improves substantially when they are connected to the water system at home. 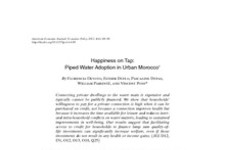 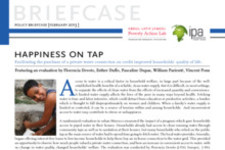