Graduating the Ultra Poor in India

More than one fifth of the world’s population lives on less than US$1.25 per day. While many credit and training programs have not been successful at raising income levels for these ultra-poor households, recent support for livelihoods programs has spurred interest in evaluating whether comprehensive “big push” interventions may allow for a sustainable transition to self-employment and a higher standard of living. To test this theory, researchers evaluated a globally-implemented “Graduation” approach to measure its impact on the lives of the ultra-poor. They found that the approach had long-lasting economic and self-employment impacts and that the long-run benefits, measured in terms of household expenditures, outweighed their up-front costs. Here we summarize the India site, which had similar effects as the other successful sites.

In India, researchers partnered with Bandhan, a local microfinance institution. The study focused on households with an able-bodied woman that were not associated with any microfinance institution and received below a certain threshold of government aid. Households commonly had little land, no non-land productive assets, and relied on informal labor for income. Bandhan further narrowed eligibility by conducting a participatory rural appraisal to identify the poorest community members. Within the sample, the median total per capita consumption was 2014 PPP US$1.15 per day, with 73 percent of households consuming less than US$1.25 per day. Around 90 percent of households reported that some adults sometimes had to skip meals, and 40 percent reported the same for children.

In partnership with Bandhan, researchers conducted a randomized evaluation to test the impact of an 18-month comprehensive livelihoods program (“the Graduation approach”) on the lives of the ultra-poor. This approach was first developed by Bangladeshi NGO BRAC in 2002 and has since been replicated in several countries. From a sample of 978households, researchers randomly assigned 512 to the treatment group and the remaining 466 to the comparison group, which would not receive the program. Of those offered the Graduation program, around half of all households accepted.

3. Consumption support: Households received weekly cash transfers of Rs. 90 (2014 PPP US$9) for 13 to 40 weeks, depending on the productive asset chosen

The 18-month Graduation program was rolled out in 2007 and 2008 and ended between 2008 and 2010. Researchers surveyed participants immediately after the program concluded and one year later.

Psychosocial wellbeing: The Graduation program did not affect measures of physical or mental health. There were no changes in illness, happiness, stress, or likelihood of feeling anxious or worried in the last year.

Political Involvement: There is some evidence that participation in the Graduation program increased political involvement. One year after the program ended, 55 percent of treatment group households reported voting in the last election (compared to 48 percent of the comparison group) and 49 percent reported voicing concerns with their village leaders in the past year (compared to 44 percent in the comparison group).

Cost-benefit analysis: Compared to less comprehensive interventions, the Graduation program had relatively high up-front costs. Researchers calculated total implementation and program costs to be US$330 per household (2014 PPP US$ 1,455). However, estimated benefits from consumption and asset growth amount to 2014 PPP US$6,298 per household, representing an overall 433 percent return. 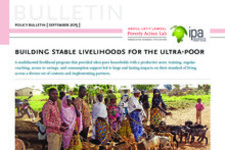 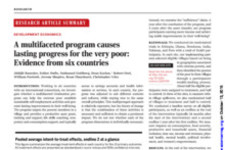 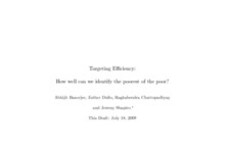 Targeting Efficiency: How well can we identify the poor?