Addressing high rates of gender-based violence experienced by girls is a policy goal in many developing countries, in particular in post-conflict settings such as Liberia where evidence suggests women commonly experience physical and/or sexual violence. IPA partnered with the International Rescue Committee (IRC), the Population Council and the World Bank’s Development Research Group to evaluate the Girl Empower program in Liberia. The program was designed to help girls in emergency situations make healthy life choices, reduce their risk of sexual abuse, and improve school attendance rates. Researchers conducted a randomized evaluation to measure the overall impact of the program and the effectiveness of adding a small incentive payment to encourage participation. Results revealed that Girl Empower led to sustained improvements in several important domains, including child marriage and sexual and reproductive health, but did not reduce sexual violence among the participants.

Sexual violence affects adults and children at all ages and in different settings, generating lifelong impacts on the health and welfare of individuals, families, and communities. However, data suggest women are generally at heightened risk. Nearly one in three women worldwide have experienced physical and/or sexual violence by an intimate partner or sexual violence by any perpetrator in their lifetime.1 Girls are particularly vulnerable after the age of ten,2 but may not have access to supportive interventions, most of which are aimed at supporting either married adult women or younger children.3

Programs designed to work specifically with adolescent girls as a unique subpopulation began to appear in the early 2000s. Some of these have shown favorable impacts on sexual health behaviors, HIV and other sexually transmitted infections, as well as on child marriage4. Few, however, have focused specifically on sexual violence experienced by adolescent girls, particularly those younger than 15 years of age. Moreover, until very recently, few interventions aimed at preventing sexual violence among adolescent girls have taken place in the humanitarian space.

Liberia, the setting for this study, has a history of armed conflict during which women suffered greatly. High levels of interpersonal and sexual violence continue to occur, particularly in areas that saw high conflict events and fatalities during the civil war. To equip girls with the skills and experiences necessary to make healthy, strategic life choices and to stay safe from sexual abuse, the International Rescue Committee (IRC) implemented a program for adolescent girls ages 13-14 called Girl Empower. The intervention was implemented in 56 communities in Nimba County, Liberia from February to November 2016.

This specific target age range was chosen based on the high rates of sexual debut, pregnancy, school dropout and marriage that were already being experienced by females aged 15-17 in the region at the time of study, as reported by the Demographic and Health Surveys. The intervention’s goal was to reach rural girls with a preventive intervention before this transition to adulthood began.

The research team collected data before the intervention and two years later.

The Girl Empower program was not successful in attaining its primary goal, which was to reduce the incidence of sexual violence experienced by adolescent females. However, both programs (GE and GE+) have moderate and statistically significant positive effects on three domains: gender attitudes, life skills, and sexual reproductive health (including child marriage).

Gender attitudes: Girls participating in the program had more equitable gender norms, this includes girls’ views on gender equity (attitudes about the importance of girls versus boys) and attitudes towards intimate partner violence — whether they agreed a wife deserves to be beaten within different sets of scenarios. GE and GE + had similar effects

Life skills: Girls participating in the program showed better knowledge of HIV, financial literacy and behaviors (which consisted of whether the girl was saving money, applying financial planning skills, or attempting to start a business), and condom effectiveness. GE and GE + had similar effects.

Overall, the study showed that Girl Empower could equip adolescent females with important life skills, positively influence their gender attitudes, and, perhaps most importantly, delay marriage and improve their sexual and reproductive health, all of which were sustained 12 months after the end of the program. Small incentive payments for regular attendance were effective in enhancing the impact of the program on child marriage and sexual reproductive health. 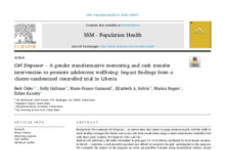