Demand for Nontraditional Cookstoves in Bangladesh

Demand for nontraditional cookstoves in Bangladesh is very low. While women—who bear disproportionate responsibility for cooking—have stronger preferences for improved stoves, they lack the authority to make purchase decisions.

One half of the world's households, and 75 percent of people in South Asia, burn biomass fuels, such as wood, leaves, dung, and peat, for energy. The smoke released from using such fuels has been shown to lead to respiratory diseases and lung cancer, which disproportionately affects women, who are primarily responsible for cooking, and the young children they are caring for. According to the World Health Organization (WHO), indoor air pollution is the single largest risk factor for female mortality. Among the entire population, indoor air pollution is responsible for nearly two million deaths annually. In response, NGOs and governments have distributed tens of millions of "improved" or "clean" stoves, but the adoption and use of these nontraditional cookstoves in the developing world has, with few exceptions, remained extremely low.

In order to explore households’ preferences, researchers designed two sets of overlapping experiments, both of which provided respondents an opportunity to purchase a nontraditional cookstove. In 2008, households in rural Bangladesh were randomly selected to receive basic health education about the harm of traditional cookstoves and the benefits of nontraditional cookstoves. Afterwards, they were given the opportunity to buy either an efficiency stove that improves fuel efficiency, or a chimney stove that reduces exposure to indoor smoke; the specific details of the offer varied by treatment group.

Each set of experiments was designed to evaluate the relative importance of two common explanations for the low adoption rates: (1) intrahousehold differences in preferences, and (2) lack of information from a trustworthy source about the new technology. For the first set of experiments, households were randomly assigned to one of the following treatment groups:

A team of two enumerators visited each household. While one enumerator interviewed the male household head, the other conducted a separate interview with his wife. After completing the survey, either the husband or wife (depending on the treatment group) was given the opportunity to purchase either type of nontraditional cookstove, but was not able to consult with his/her spouse before making the decision.

The second set of experiments tested a common social marketing strategy for disseminating credible information about a new technology. Specifically, it paired random variation in prices and stove type with information about the purchase decisions of village “opinion leaders.” In selected village, within each distinct neighborhood, researchers identified three opinion leaders. These opinion leaders were the first to be offered stoves, and their adoption decisions were then announced in the village. The detailed breakdown of the treatment groups was as follows:

Roughly four months after the orders were placed, project staff returned to deliver the cookstoves. At that time, households could refuse to install or pay for the stove.

Intrahousehold differences in preferences: Women seemed to exhibit a stronger preference than men for any improved stove, in particular for the health-saving chimney stoves. When the marketing offer was made to the wife rather than the husband, orders for the healthier chimney stove increased by 11.3 percentage points. This is consistent with the fact that the health cost of indoor smoke is greater for women. However, when a small positive price was charged for either stove, women became marginally less likely than men to order a stove. This may indicate that despite their preferences, women lack authority to make purchases.

During the initial offer, individual choices were kept hidden. However, in the intervening period between stove order and stove purchase, husbands and wives had the opportunity to learn about each other’s choices and preferences, more generally. During this time period, women's choices seemed to converge with their husbands. At the final purchase stage, any gender difference in stove orders had disappeared. Again, it seems as if women could not act on their preference for improved cookstoves when their choice could subsequently be undone by their husband.

Information dissemination: Receiving external information from opinion leaders seemed to matter more when the costs and benefits of technology were not readily apparent. Opinion leader influence on households’ purchase decisions was significantly less for chimney stoves, whose value in removing indoor smoke was apparent, than for efficiency stoves, whose combustion properties were much less obvious.

When the initial stove orders were made, there was very limited information about the new technologies available in the village except for the opinion leader purchase decisions. After orders were placed, the cookstoves were delivered over a period of several weeks and consequently, those receiving cookstoves later could learn from those who received deliveries early. Subsequently, the value of the information acquired from the opinion leaders' choices declined over time, even for efficiency stoves. These results suggest that social marketing programs—which often attempt to use opinion leader influence to increase the adoption of health technologies—are likely to be less effective in the long run as common experience with technologies grows.

Price effects: Reducing cookstove prices by 50 percent increased the number of orders and purchases of efficiency stoves by 25 and 11.6 percentage points, respectively. In contrast, orders for chimney stoves did not change significantly in response to changes in the price; the 50 percent subsidy only increased the order rate from 31.4 percent to 34.5 percent. Such marked differences in price elasticity suggest that in ordering stoves, households were less willing to trade off smoke emissions and health than they were the cook’s time and fuel costs. 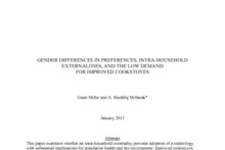 Gender Differences in Preferences, Intra-Household Externalities, And the Low Demand for Improved Cookstoves 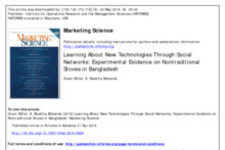