Debates: The Impact of Voter Knowledge Initiatives in Sierra Leone

While political debates are often considered an integral part of campaign strategy, there is little definitive evidence on whether they affect how people vote. In Sierra Leone, researchers partnered with the civil society organization Search for Common Ground to evaluate how the dissemination of political information through debates impacts voter behavior, campaign spending, and the performance of elected politicians. The study found that watching debates substantially increased political knowledge, policy alignment, and vote shares for higher-quality candidates. The debates also encouraged politicians to invest more in their constituencies, both during the campaign and one year later.

Political debates are often considered an integral part of campaign strategy in contemporary democracies. Debates can reveal information about the relative quality of candidates and their differing policy positions. By creating a public record of their pre-election commitments, they may enhance the subsequent accountability of elected officials. In developing countries where voters may have very little information about candidates, publicizing debates could have a large impact on electoral outcomes. Yet there is little evidence on whether debates affect actual voting behavior. To address this gap, researchers examined the impact of showing public debates leading up to the 2012 parliamentary elections in Sierra Leone on voter knowledge, voter behavior, and politician behavior. This research sheds light on the above topics. In addition, it investigates if information swings voters from voting based on ethnicity to voting based on policy.

Voting patterns in Sierra Leone have historically been based on ethnic ties and pre-existing party affiliations; the two largest political parties are closely associated with ethnic groups in the north or south. The country has 112 Parliamentary constituencies, in which one Member of Parliament (MP) represents approximately 40,000 residents in the national legislature. Search for Common Ground (SFCG), a nonpartisan civil society organization, operates programs designed to promote civic engagement and dialogue to build sustainable peace. The 2012 Parliamentary elections presented an opportunity for SFCG to test new electoral programs that could increase transparency, voter knowledge of candidates, and engagement between voters and MPs.

In the run-up to the November 2012 parliamentary elections in Sierra Leone, researchers partnered with SFCG to evaluate how the dissemination of political information through debates impacted voter knowledge and behavior, campaign spending, and the performance of elected politicians.

After identifying what they predicted would be 28 relatively competitive races, SFCG organized and filmed debates organized in a standardized format between the major candidates in a randomly selected half of these constituencies. After the debates, both the debate audience and an expert panel of government and civil society representatives separately determined the debate winner. From a total of 224 polling centers in the 14 constituencies where debates were filmed, 112 were randomly assigned to host public screenings of a video of the debate, between one and five weeks before the election. In total, an estimated 19,000 people viewed the videos. Surveys of voters before and after—in some cases only after—the screenings measured how their perceptions of candidates, knowledge of candidates, and voting intentions changed.

In a separate group of forty polling centers, the research team showed the debates to individual voters in order to test the effects of different kinds of information, such as policy positions, personal characteristics, or persuasive speeches, on voter behavior. Voters were randomly assigned to one of the following groups:

On or immediately after Election Day, researchers conducted exit polls among a random subset of all voters. They used these polls, as well as the Election Commission’s official voting records, to measure voting outcomes. Once the elected MPs took office, they tracked their performance in both treatment and comparison constituencies.

Overall, exposure to the debates significantly increased voters’ political knowledge and changed their voting behavior. Candidates who participated in the debates increased campaign expenditures in communities where the debates were screened. The debates also caused politicians to engage with and invest more in their constituencies once they were in office.

Voter knowledge: The public debate screenings led to substantial improvements in voter knowledge, including general political knowledge as well as knowledge of specific candidates and their policy positions. For example, the proportion of voters who knew which candidate (if any) had been an MP in the past increased by 11 percentage points (from 49 percent to 60 percent) and the proportion of voters who could correctly identify candidates’ top priority for government spending doubled (from 14 to 29 percent).

Voting choices: Exposure to the public debate screening significantly increased policy alignment, measured as a match between the voter’s reported policy position and that of the candidate they voted for. Debate viewers were 9 percentage points more likely (from 43 percent to 52 percent) to have voted for a candidate whose top priority issue aligned with theirs. Policy alignment improved not only because voters became more likely to select candidates with views similar to their own, but also because voters changed their views to match those of their preferred candidate after watching them speak.

The debate screenings also made some voters more likely to vote for high-quality candidates. There was a 5-percentage-point increase in votes for the debate winner (as judged by the audience at the debate) relative to the comparison group. This increase was in part driven by voters who switched votes across ethnic-party lines when the debate winner was from a rival party. For voters historically aligned with the party of the debate winner, the screening had no effect on their vote choice.

The individual treatment arms aim to unpack which types of information—from “hard facts” about policy to more intangible information about charisma—drive these changes in voter behavior.  All three treatments (the full debate, radio report, and get-to-know you video), increased political knowledge, although the get-to-know-you was (as expected) only half as effective. Only the full debate, however, had a significant impact on voters’ policy alignment with their preferred candidates and their vote choice. The fact that the radio report treatment was as effective in building knowledge as viewing the debate, but only the full debate treatment impacted policy alignment, suggests that personality plays a key role in persuading voters.

Policy implications: In sum, this research suggests that publicizing candidate debates can significantly increase voters’ political knowledge, which can then influence their vote on Election Day. Debates may also encourage politicians to invest more in their constituencies, both during the campaign and after they are elected.  Finally, this project demonstrates that publicized interparty debates can be a cost-effective and logistically feasible method of improving voters’ knowledge; fixed production costs for the debates were roughly US$5,000 each. In settings with higher mass media penetration, debates could be televised, reducing dissemination costs. 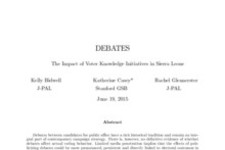 Debates: The Impact of Voter Knowledge Initiatives in Sierra Leone