Encasing water sources in concrete is an effective way of improving water quality and reducing the burden of diarrhea.

Diarrheal diseases are a leading cause of morbidity and mortality in the developing world, killing an estimated 2.6 million people per year between 1990 and 2000. Children under 5 experience an average of 3.2 diarrheal episodes per year,1 which accounts for 20 percent of deaths in this age group.2 Even when diarrheal episodes are not fatal, they can lead to severe dehydration and have long-term impacts on children’s cognitive and physical development. Diarrheal diseases are often transmitted when a water supply is contaminated with fecal matter, and may be endemic in places where the water supply is irregular.

Diarrhea is widespread in rural Kenya, where 43 percent of the population gets their drinking water from nearby springs, usually transported in 10 to 20 liter jerry-cans. Landowners have no incentive to improve the sanitation of water sources on their property because custom requires them to allow everyone free access to springs. As such, water is often contaminated by surface rainwater runoff as it seeps from the ground, and this contamination is spread to the population who collect drinking water at the spring. However, people are often reluctant to change their habits to include behaviors that may reduce diarrhea incidence such as hand washing or daily chlorination of water, resulting in low uptake for these “point of use” interventions.

Researchers sought to find an inexpensive way to improve water quality at the source, and thereby reduce the burden of diarrhea by making improvements to springs. Working with a local NGO, they identified 200 springs in the Busia district of Kenya, and persuaded each local community to contribute 10 percent of the costs of the improvement project, usually in labor. At a cost of about US$1,000 per site, half of these springs had their sources encased in concrete, forcing water to flow through a pipe rather than seeping from the ground, thus preventing contamination from groundwater. NGOs conducted community meetings at which user committees comprised of local residents were selected and placed in charge of maintaining the protected springs. These committees were responsible for performing basic maintenance, including patching concrete and clearing drainage ditches, at an average cost of US$35 per year via community contributions.

Household characteristics such as income, education and health were approximately equal among the two groups at the start of the program, suggesting that there were no systematic differences between communities that had their springs protected and those that didn’t. Throughout the program, statistics were collected on the level of water contamination and diarrheal disease in all communities and by examining changes in these measures, impacts of the intervention could be assessed.

Impact on Diarrhea: The simple infrastructure investment of “spring cleaning” significantly reduced both water contamination and the incidence of diarrhea. There was 66 percent less E-coli contamination in treated springs than in untreated ones, and an average of 24 percent less contamination in users’ home water supplies among households who collected water from multiple springs and those who only used protected springs. This incomplete transfer of benefits may be due to the fact that households may transport and store water in contaminated vessels.

Despite these mitigating factors, diarrheal incidence in children under 3 years old fell by 4.7 percentage points, or 25 percent, though there was no significant effect on children ages 5 to 12. Interestingly, diarrhea reduction was disproportionately concentrated among girls, suggesting that spring cleaning could be an effective tool for the improvement of female child survival.

Behavior Modification: Possibly due to the apparent benefits of using protected springs, families began increasing their use of protected springs for drinking water, relative to other sources. However there were no significant changes in water transportation, home water chlorination, boiling or hygiene practices, implying the experience with significantly cleaned water did not increase people’s taste for water improvement.

Willingness to Pay: Researchers used the information gathered about changes in use of protected springs to estimate how much time households were willing to expend to get cleaner water, and by extension how much they were willing to pay for it. These empirical estimates were approximately one third of what households report they are willing to pay for clean water and less than one-tenth of the value that policymakers often use when assessing social programs. The travel habits of residents of Busia, Kenya suggest that they are willing to spend at most 10.1 work days, or about US$0.89 to avert a diarrhea case. Using a high estimate for the value of time, this suggests a valuation of US$2,715 per averted child diarrhea death, far below the estimated value of a statistical life, and the cost-effectiveness cutoffs usually used in analyses of health projects in less developed countries. This implies that people either do not understand the causal link between clean water and diarrhea, which anecdotal evidence suggests they do, or that they place a lower value on improving infant and child health than typically assumed. 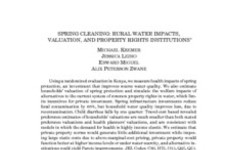 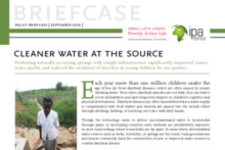 Cleaner Water at the Source