Are Training Programs Better Than Cash Transfers At Improving The Lives Of Poor And Underemployed Young People? Evidence From Rwanda

Finding effective measures to integrate young people into productive adult life is crucial, especially given Africa's growing youth population. However, the evidence surrounding various policy alternatives is mixed, and there is no clarity on the long-term impact and cost-effectiveness of the various alternatives. In Rwanda, researchers conducted a cash benchmarking evaluation, — a direct comparison of in-kind to cash transfer programs — of a workforce readiness and skills training program called Huguka Dukore. Both the Huguka Dukore program and cash transfers had a positive impact in the short and long term. However, the long-term effects faded by about half compared to the short-term.

Africa is a region characterized by a young population, with about 70 percent of the population under thirty.[1] Rapid population growth in the region suggests that this trend will continue to grow, with projections that the continent will be home to almost half of the young people in the world by the end of the century.[2] Integrating young people into a productive adult life is therefore of paramount importance, especially given the informal nature of most economies in Africa. With one of the lowest average levels of schooling in the world, skills are almost certainly a constraint, but not the only one. Credit constraints, for example, or macroeconomic conditions, also limit livelihood opportunities and pathways out of poverty.

There is mixed evidence of the effectiveness of various measures to increase and improve employment opportunities. For example, some entrepreneurship and job training programs have had modest success — especially in formal contexts[3]— and evidence reveals that cash transfers are often used to address credit concerns[4].  However, questions remain as to how these measures can support productive transitions into adulthood in challenging macroeconomic contexts. Moreover, the ability of these interventions to have long-term effects and the cost effectiveness of the various approaches must still be determined. This study aims to shed some light on these issues by conducting a cash benchmarking evaluation, a direct comparison of in-kind to cash transfer programs.

In Rwanda, about 30 percent of the youth population is neither employed, in training, nor in school.[5] To address some of these challenges, the United States Agency for International Development (USAID) in partnership with the nonprofit Education Development Center, Inc. (EDC) implemented a workforce readiness and skills training called Huguka Dukore/ Akazi Kanoze which means' Get Trained and Let’s Work/Work Well Done’ in Kinyarwanda.

The Huguka Dukore program is a five-year project (2017-2021) aiming to provide 40,000 vulnerable youth with employability skills in 19 (of 30 total) districts nationwide. Targeting youth from poor households with less than secondary education, with an emphasis on women and youth with disabilities, the program offers multiple pathways including: i) workforce readiness preparation; ii) individual youth entrepreneurship and microenterprise start-up; and iii) technical training for specific trades after which trainees may be placed in apprenticeships.

The research team partnered with GiveDirectly, a US-based nonprofit that specializes in sending mobile money directly to the mobile phones of beneficiary households to conduct an impact assessment that measures not only the impact of the Huguka Dukore, but also how it compares to just giving people cash.

Researchers conducted a randomized evaluation of the Huguka Dukore program to measure the short-term (18 months) and long-term (3.5 years) effects of the program. In a novel cash benchmarking design, researchers also analyzed the benefits of the program compared to the provision of cash transfers at comparable costs to the donor.

Study participants include poor, underemployed youth targeted by the Huguka Dukore program, who expressed willingness to enroll in that training program, and who met the technical poverty criteria to be eligible for Give Directly funding. Public lotteries were used to randomly assign the youth into four groups, receiving either:

Both the Huguka Dukore program and the unconditional cash transfer had positive short term and long-term effects on various outcomes. However, approximately half of the benefits observed after 18 months of the implementation of the various interventions faded three years later.

Cash transfers had a greater impact in the short term, especially in terms of income, consumption and subjective well-being. Due to the fading effects, it is impossible to determine whether the Huguka Dukore program was in the long run better than cash transfers. Furthermore, the researchers found no evidence that the combination of Huguka Dukore and cash had a better effect than the standalone programs.

These effects were consistent between the richest and the poorest, men and women, old and young, and across different labor markets.

In the long term, both interventions decreased participation in agricultural wage labor. Huguka Dukore pushed individuals into non-agricultural wage, and cash transfers, especially large ones, increased income in micro-enterprise and non-agricultural self-employment. Both interventions also led to a burst of new business formation in the short term, but a significant fraction of the businesses closed by the time researchers conducted the final survey.

The program may have had an impact on mitigating the shock caused by the COVID pandemic. Of the people in the comparison group (who did not receive intervention), 78 percent reported COVID led to a negative shock to their income. Furthermore, among people who did not receive intervention, there was a dramatic deterioration in production assets and business ownership between the intermediate and final surveys.  The positive effects of both the program and the cash transfers appear to have helped protect productive assets, business ownership, and profits during a period in which these outcomes declined in the general population. 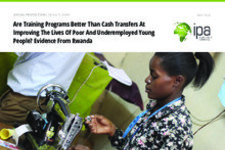 Are Training Programs Better Than Cash Transfers At Improving The Lives Of Poor And Underemployed Young People? Evidence From Rwanda 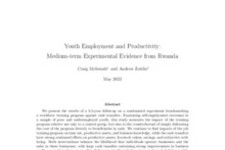 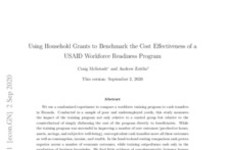