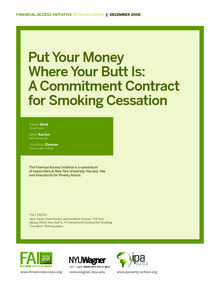 Put Your Money Where Your Butt Is
If smokers are well aware of the negative impacts of smoking, why don’t they quit? While nicotine substitutes and counseling have been dominant in smoking cessation programs in developed countries, these programs are costly and often not accessible for the rural poor in developing countries. Researchers Xavier Giné, Dean Karlan, and Jonathan Zinman designed an alternative approach: a commitment contract that provides financial incentives for smokers to quit. The CARES product (Committed Action to Reduce and End Smoking) was introduced and evaluated in the Philippines. The researchers find evidence supporting its effectiveness, offer suggestions on future research and recommendations on how to improve smoking cessation programs.
Full published paper is available here.
Authors:
Xavier Giné, Dean Karlan, Jonathan Zinman
Country:
Philippines
Program area:
Financial Inclusion, Health
Topics:
Behavioral Design, Commitments, Product Design, Savings
Type:
Brief
December 01, 2008 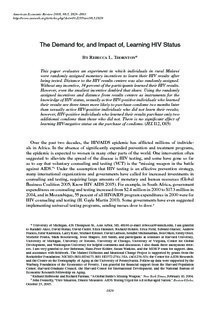 The Demand for, and Impact of, Learning HIV Status

This paper evaluates an experiment in which individuals in rural Malawi were randomly assigned monetary incentives to learn their HIV results after being tested. Distance to the HIV results centers was also randomly assigned. Without any incentive, 34 percent of the participants learned their HIV results. However, even the smallest incentive doubled that share. Using the randomly assigned incentives and distance from results centers as instruments for the knowledge of HIV status, sexually active HIV-positive individuals who learned their results are three times more likely to purchase condoms two months later than sexually active HIV-positive individuals who did not learn their results; however, HIV-positive individuals who learned their results purchase only two additional condoms than those who did not. There is no significant effect of learning HIV-negative status on the purchase of condoms. 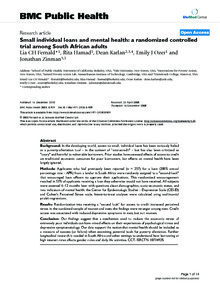 In the developing world, access to small, individual loans has been variously hailed as a povertyalleviation tool – in the context of “microcredit” – but has also been criticized as “usury” and harmful to vulnerable borrowers. Prior studies have assessed effects of access to credit on traditional economic outcomes for poor borrowers, but effects on mental health have been largely ignored. 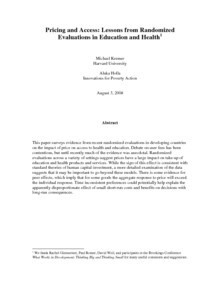 Pricing and Access: Lessons from Randomized Evaluation in Education and Health

This paper surveys evidence from recent randomized evaluations in developing countries on the impact of price on access to health and education. Debate on user fees has been contentious, but until recently much of the evidence was anecdotal. Randomized evaluations across a variety of settings suggest prices have a large impact on take-up of education and health products and services. While the sign of this effect is consistent with standard theories of human capital investment, a more detailed examination of the data suggests that it may be important to go beyond these models. There is some evidence for peer effects, which imply that for some goods the aggregate response to price will exceed the individual response. Time inconsistent preferences could potentially help explain the apparently disproportionate effect of small short-run costs and benefits on decisions with long-run consequences. 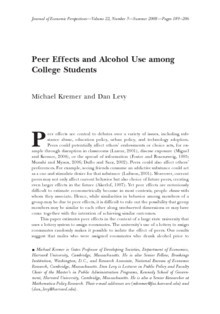 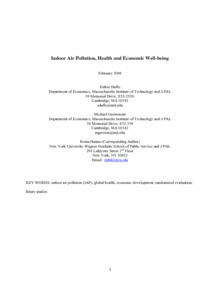 Indoor air pollution (IAP) caused by solid fuel use and/or traditional cooking stoves is a global health threat, particularly for women and young children. The WHO World Health Report 2002 estimates that IAP is responsible for 2.7% of the loss of disability adjusted life years (DALYs) worldwide and 3.7% in high-mortality developing countries. Despite the magnitude of this problem, social scientists have only recently begun to pay closer attention to this issue and to test strategies for reducing IAP. In this paper, we provide a survey of the current literature on the relationship between indoor air pollution, respiratory health and economic well-being. We then discuss the available evidence on the effectiveness of popular policy prescriptions to reduce IAP within the household. 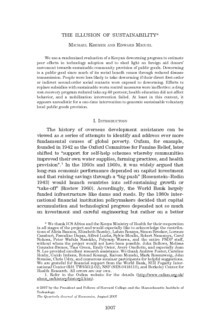 The Illusion of Sustainability

We use a randomized evaluation of a Kenyan deworming program to estimate peer effects in technology adoption and to shed light on foreign aid donors’ movement towards sustainable community provision of public goods. Deworming is a public good since much of its social benefit comes through reduced disease transmission. People were less likely to take deworming if their direct first-order or indirect second-order social contacts were exposed to deworming. Efforts to replace subsidies with sustainable worm control measures were ineffective: a drug cost-recovery program reduced take-up 80 percent; health education did not affect behavior, and a mobilization intervention failed. At least in this context, it appears unrealistic for a one-time intervention to generate sustainable voluntary local public goods provision. 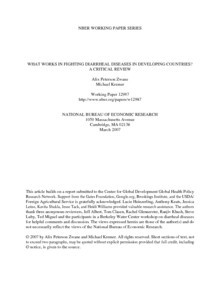 What Works in Fighting Diarrheal Diseases in Developing Countries? A Critical Review

The Millennium Development Goals call for reducing by half the proportion of people without sustainable access to safe drinking water. This goal was adopted in large part because clean water was seen as critical to fighting diarrheal disease, which kills 2 million children annually. There is compelling evidence that provision of piped water and sanitation can substantially reduce child mortality. However, in dispersed rural settlements, providing complete piped water and sanitation infrastructure to households is expensive. Many poor countries have therefore focused instead on providing community-level water infrastructure, such as wells. Various traditional child health interventions have been shown to be effective in fighting diarrhea. Among environmental interventions, handwashing and point-of-use water treatment both reduce diarrhea, although more needs to be learned about ways to encourage households to take up these behavior changes. In contrast, there is little evidence that providing community-level rural water infrastructure substantially reduces diarrheal disease or that this infrastructure can be effectively maintained. Investments in communal water infrastructure short of piped water may serve other needs and may reduce diarrhea in particular circumstances, but the case for prioritizing communal infrastructure provision needs to be made rather than assumed. 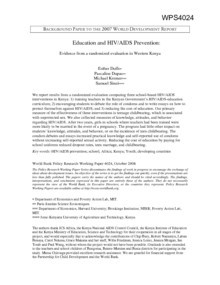 The authors report results from a randomized evaluation comparing three school-based HIV/AIDS interventions in Kenya: (1) training teachers in the Kenyan Government's HIV/AIDS-education curriculum; (2) encouraging students to debate the role of condoms and to write essays on how to protect themselves against HIV/AIDS; and (3) reducing the cost of education. Their primary measure of the effectiveness of these interventions is teenage childbearing, which is associated with unprotected sex. The authors also collected measures of knowledge, attitudes, and behavior regarding HIV/AIDS. After two years, girls in schools where teachers had been trained were more likely to be married in the event of a pregnancy. The program had little other impact on students' knowledge, attitudes, and behavior, or on the incidence of teen childbearing. The condom debates and essays increased practical knowledge and self-reported use of condoms without increasing self-reported sexual activity. Reducing the cost of education by paying for school uniforms reduced dropout rates, teen marriage, and childbearing. 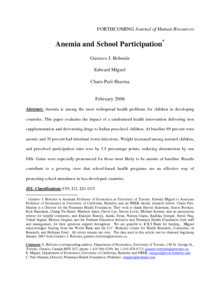 Anemia is among the most widespread health problems for children in developing countries. This paper evaluates the impact of a randomized health intervention delivering iron supplementation and deworming drugs to Indian preschool children. At baseline 69 percent were anemic and 30 percent had intestinal worm infections. Weight increased among assisted children, and preschool participation rates rose by 5.8 percentage points, reducing absenteeism by one fifth. Gains were especially pronounced for those most likely to be anemic at baseline. Results contribute to a growing view that school-based health programs are an effective way of promoting school attendance in less developed countries. 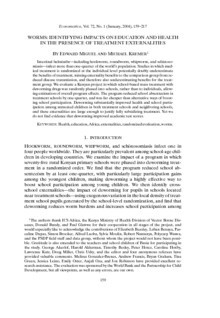 Worms: Identifying Impacts on Health and Education in the Presence of Treatment Externalities

Intestinal helminths—including hookworm, roundworm, whipworm, and schistosomiasis—infect more than one-quarter of the world’s population. Studies in which medical treatment is randomized at the individual level potentially doubly underestimate the benefits of treatment, missing externality benefits to the comparison group from reduced disease transmission, and therefore also underestimating benefits for the treatment group. We evaluate a Kenyan project in which school-based mass treatment with deworming drugs was randomly phased into schools, rather than to individuals, allowing estimation of overall program effects. The program reduced school absenteeism in treatment schools by one-quarter, and was far cheaper than alternative ways of boosting school participation. Deworming substantially improved health and school participation among untreated children in both treatment schools and neighboring schools, and these externalities are large enough to justify fully subsidizing treatment. Yet we do not find evidence that deworming improved academic test scores.