IPA has partnered with the Inspector Attorney General Office in Colombia to develop an embedded innovation lab to support the office in making policy decisions based on data and rigorous evidence.

The Inspector Attorney General Office in Colombia (Procuraduría General de la Nación, or PGN) is responsible for protecting and safeguarding the rights of all citizens in Colombia and for representing their interests to the government. The PGN oversees all public employees and entities in the country as well as any individual or company that manages or administers public funds. They can conduct investigations and take disciplinary actions against misconduct of public servants or mismanagement of public resources. In addition to its disciplinary function, PGN also has a preventive arm that relies on data from multiple sources to identify and mitigate risks of misconduct and human rights violations, among other functions.

PGN is currently implementing an ambitious modernization plan that includes a key initiative aimed at creating and fostering a culture of evidence-based decision-making within the organization. To put this plan into action, PGN has partnered with IPA Colombia to develop, incubate, and institutionalize an embedded innovation lab. The Lab operates as a unit within the Public Ministry’s Research Institute (a special research unit in the PGN) and incentivizes and assists in the production and use of data and evidence to make important policy decisions.

Following an initial phase of strategic planning and proof of concept conducted in late 2019, in 2020, IPA continued to support the PGN through the design, implementation, and experimental evaluation of innovative solutions to fight corruption and prevent human rights violations. In addition to the experimental pilots, the lab helped improve the design of a tool to collect and monitor data on the impacts of COVID-19. The results will inform specific decisions in each of these priority areas, demonstrate how data and rigorous evidence can systematically improve decision-making and outcomes for the PGN in the long-term, and lay the groundwork for innovative processes inside the entity.

How Does the ProcuraLAB Work?

IPA has been actively involved in building evidence-based policymaking capability within government agencies around the world. This initiative builds on the approach and the lessons learned from previous experiences to create a space within the PGN equipped with the resources, methods, and incentives to pursue a cycle of innovation and rigorous measurement with the goal of identifying and scaling effective solutions to the PGN’s most pressing problems. 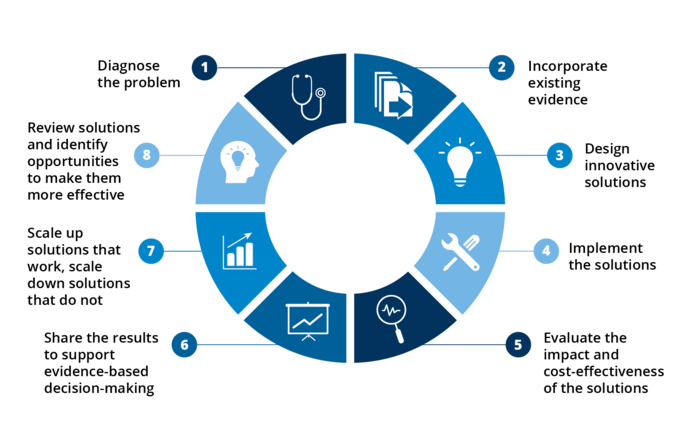 To put this cycle into practice, the lab set an ambitious objective to design, implement, and evaluate innovative solutions aimed at addressing problems in high-priority areas defined by the Inspector Attorney General: preventing corruption, protecting human rights, and improving the organization’s operations and management processes. Two experimental pilots are currently ongoing and are expected to generate results by the end of 2020. Additionally, the lab helped in developing a tool used to monitor the impact of COVID-19, which was implemented shortly after the surge of the pandemic.

Not only will the results of the pilot projects generate valuable evidence to inform decision-making in the short-run, it will also serve as a proof of concept, demonstrating the value of institutionalizing the lab within the PGN.

The two initial pilots and the COVID-19 tool are described below:

In recent years, Colombia has experienced a massive influx of Venezuelan migrants that has generated social and political unrest on different fronts including government expenditure, security, crime, labor market and provision of educational and healthcare services. This pilot seeks to implement and evaluate two different learning strategies to improve the attention provided by the PGN to the Venezuelan migrant population and prevent xenophobic behaviors within the PGN. It will also serve as a way to inform and complement other strategies that the PGN has initiated on this front.

The first strategy is an experiential learning tool available in a platform developed by the Interamerican Development Bank (IDB) called “In Other Shoes” or “En Otros Zapatos” (EOZ). Through storytelling, EOZ attempts to develop empathy towards outgroups (including Venezuelan migrants in Colombia) by placing participants in the shoes of a fictional character. The second strategy provides information (data and figures) to demystify common beliefs about the impact of migration on crime and employment.

To identify what types of strategies are most effective, more than 4,000 PGN officers across the country will be randomly assigned into three different groups. The first group will be invited to complete EOZ, the second group will receive demystifying information, and the third will serve as a comparison group that does not participate in either program. Public servants assigned to all groups will be asked to complete a survey to measure attitudes, behaviors and opinions about Venezuelan migration in Colombia.1

The National Transparency Law in Colombia defines the set of entities or subjects required to disclose public information and empowers the PGN to enforce compliance with this law by collecting this information. To that end, the Transparency Office of the PGN conducted a Census to identify the specific entities obliged under this Law and created the ITA Matrix as a mechanism to collect transparency information. Under this framework, obliged subjects must answer a series of questions in the ITA Matrix annually and provide proof of how they are complying with the Law. However, the response rate has been very low.

The aim of this pilot project is to assess which communication strategies work best to influence the disclosure of transparency data to the PGN and to foster the response to the ITA matrix, thereby increasing compliance with the law. Obligated subjects have been randomly assigned into one of seventeen communication strategies combinations which include the use of reminders, access to training resources, acknowledgement of past completion/non-completion of the Matrix, and communications that responses could be audited.

Other Areas of Work

Given the different socio-economic impacts of the COVID 19 pandemic, the PGN recognizes the need to identify and understand the challenges and needs of the population in different areas of Colombia. As the country's pandemic progressed and new government policies and restrictions were put in place, it became crucial to develop a tool that would allow the government to prioritize problems and monitor the evolution of the situation.

The Lab collaborated with the office in charge of this task to design and implement an automated tool to collect and monitor data in a timely manner and generate scorecards that help the PGN visualize, communicate and track the information. The tool is based on the CART principles for collecting effective and usable data and is currently being used by the PGN team to sustain the entity’s role and presence in territories despite the challenges brought by COVID-19.

1 Participants in group one and two will take the survey after the treatment.