A low-cost technology for treating water is now used by 1.3 million people.

Researchers found that a point-of-collection water chlorination system, in combination with encouragement from community promoters, dramatically increased access to safe water in Kenya. In response, IPA launched and incubated a program called Dispensers for Safe Water. The program is now part of Evidence Action, which is dedicated to bringing cost-effective and evidence-based interventions to scale. Today the Dispensers for Safe Water program is providing on-going access to chlorine to over 4 million people in Kenya, Malawi, and Uganda today.

Each year, approximately 760,000 children under the age of five die from diarrheal diseases, a leading cause of which is unsafe drinking water.1 Even when diarrheal episodes are not fatal, chronic diarrhea in early childhood can contribute to malnutrition, with potential long-term consequences for child development. Governments and donors commonly fund the construction of new or improved water sources to combat the contamination of water with the fecal-oral pathogens that cause diarrhea. However, recontamination when water is transported or stored remains a problem, even if source water is uncontaminated.2 In response, the World Health Organization has promoted the use of dilute chlorine, an approach which not only disinfects water, but provides ongoing protection from recontamination for over 24 hours.3

The standard approach to encourage rural populations to adopt chlorination has typically been via social marketing—the promotion and sale of small bottles of chlorine through the private sector. Despite the significant health benefits, and relatively low price of chlorine ($0.30 for a family of five for a month in Kenya4), adoption remains low. Even where adoption rates have been higher, chlorine use drops after the marketing efforts end. 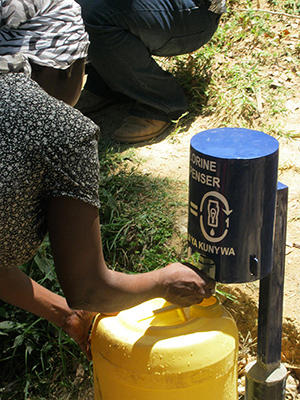 A woman at a chlorine dispenser station.
CREDIT:
Holly Dentz

In the first study, researchers and partner organizations sought a cost-effective way to reduce diarrheal disease by improving water quality at the source. Under the “Spring Cleaning” program, community springs were encased in concrete, forcing water to flow through a pipe rather than seeping from the ground, thus preventing contamination from groundwater. This simple infrastructure investment reduced fecal contamination at the source by 66 percent. However, much of this improvement was lost in users’ home water supply due to recontamination during transport and storage. For more, see the related study page.

Building upon these results, the researchers conducted a second set of randomized evaluations to investigate the role of price in determining households’ use of chlorination products. In the first phase, households were provided with a seven-month supply of WaterGuard, a point-of-use chlorination product, and a storage container designed to prevent contamination. This group was subdivided into treatment arms receiving either coupons for a 50 percent discount on bottles of WaterGuard, additional verbal persuasion messages, or no coupons or messages. The free supply increased chlorination by 52 percentage points, a large effect relative to the 2 percent starting level. However, only 10 percent of the coupons for discounted WaterGuard were redeemed, and additional persuasive messages about the product did nothing to boost demand, suggesting that both price and convenience play an important role in households’ decisions to take up water treatment products.

In the second phase, researchers compared multiple treatments designed to increase chlorine take-up, including persuasion messaging, promotion from members of the local community, and access to chlorine dispensers combined with local promotion. Paid community-based promoters who provided reminders through home visits initially increased chlorine take-up by about 30 percentage points, but this effect was not sustained after payments to promoters ended, making this an expensive long-run strategy.

To combine the advantages of reduced cost, convenience, and social norms for promoting chlorine use, researchers designed and tested a point-of-collection chlorine dispenser system that provided a free supply of chlorine at local water sources. Chlorine dispensers, in combination with the paid promoters, increased take-up by 53 percentage points, and take-up was sustained 30 months into the program, even after payments to promoters had ended. For more, see the related study page.

At scale, the full cost of the chlorine dispensers system is projected to be as low as $0.50 per person per year, much cheaper than home delivery (or retail sale) of individual chlorine bottles. This cost includes both hardware and the recurring costs of chlorine refills, dispenser management, and maintenance, making the dispenser highly cost-effective.

Chlorine dispensers offer an innovative approach to increasing the adoption of water treatment by rural populations.
The Impact

More information about Dispensers for Safe Water can be found on the Evidence Action website.