In an ideal world, all children should have access to basic care, regardless of whether they grow up in a poor or rich family. During the last 20 years, mortality rates of children under five years of age worldwide have almost been cut by half. But in 2015 there were still close to 6 million who died, often from causes which we know how to avoid or cure. Free healthcare would lift financial barriers, giving access to health services to the poorest families. Margaret Chan, general director of the World Health Organization (WHO), said in a speech in 2007 that abolishing user fees makes sense in order to reduce poverty. On the other hand, free access may create its own problems, by encouraging parents to visit the doctor too often, especially when parents lack the ability to recognize when their child needs medical care. The basis for this study was an expansion of Action for Health in 2012. The NGO identified about 1600 eligible recipients, of whom a quarter each were randomly selected to receive either both the “free care” and the “health worker” component of Action for Health, or only free care, or only health worker visits. All children were enrolled into the full program in the next expansion.
Mothers described the children’s daily symptoms, medical consultations, and treatments during weekly surveys. This gave the researchers information on over 3000 spells of illness and over 500 doctor consultations.

Medical need for care depends partly on how long given symptoms are present: for example, diarrhea is harmless until it lasts for five days or longer. Using the WHO guidelines, we classified each day in an illness spell as either “early” for care, or “care required”. With this data, we were able to identify both underuse – no medical care on a “care required” day -- and overuse – a doctor visit on an “early” day. 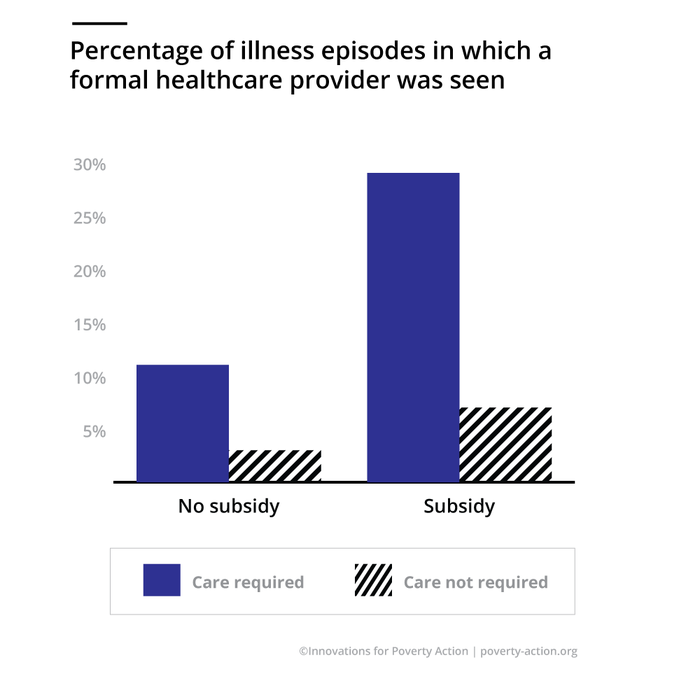 The research revealed that parents were better at identifying the healthcare needs of their children than is typically assumed: a doctor visit is about seven times more likely on a “care required” than on an “early” day. Moreover, providing lower-cost care increases the probability of a visit dramatically, by around 250%, and most of this increase happens on “care required” days. However, even with the substantial reduction in costs under Action for Health, there remains a lot of underuse: in about 70% of illness spells that require medical care according to WHO guidelines, the child never sees a doctor. By contrast, overuse occurs only in 3% of spells.

The health workers had very little additional effects on underuse over the subsidy alone, and even a small negative effect among children who did not receive subsidized care. We interpret this to mean that parents use the information from the health workers in unintended ways: in some cases, they may learn that the illness is serious enough that the WHO would recommend a doctor visit, but not yet so dangerous that they need immediate care, and they decide to wait a bit longer.

The underuse of healthcare suggests that subsidies remove barriers to care only partially; other reasons for underuse may be that parents cannot take time away from work and household duties or lack the means of transport to travel to the clinic with a sick child. In this context, this experimental trial shows that parents can tell when their child is ill -- reducing the cost of healthcare can therefore substantially improve underuse of care, without creating a lot of wasteful spending.

The results also show that mothers are significantly less worried about their children when healthcare is less costly, and the subsidy is associated with shorter episodes of illness. We can therefore assert that it is good policy to make primary care affordable for the poorest. Coinciding with these promising findings, on April 2 Burkina Faso's minister of health has launched a gradual introduction of free access to healthcare for children under five for those diseases that cause 80% of deaths in this age group.

Note: A version of this originally appeared in French in Burkina Faso's L'Economiste.

Anja Sautmann is an associate professor of Economics at Brown University.