March 15, 2013
Katie Parry
All eyes were on Kenya in recent weeks during the run up to the election. The tension was of course understandable; this was the first election since more than 1,000 people were killed in the violence that broke out after Raila Odinga questioned the legitimacy of the 2007 election results. There were considerable efforts both inside and outside of Kenya to ensure that this election was free, fair and peaceful. Part of this has been the instigation of high-tech voting and counting systems, to decrease opportunities for ballot stuffing and increase faith in the legitimacy of both the electoral process and the eventual result. There have also, however, been constitutional changes, altering the requirements for victory in the presidential election. The winning candidate must now get more than 50% of total votes cast and at least 25% of votes in half of Kenya’s 47 counties. This national-level change was partly designed to encourage a move away from regional or ethnic-group based voting constituencies, and require the new president to have more broad-based support.
Ethnicity-based voting patterns continue across the continent, but a recent paper indicates that in Sierra Leone’s 2007 election people were more likely to vote against traditional party and ethnic affiliations in local races than national races, where they had more information about candidates. What sorts of information dissemination mechanisms are most effective in increasing transparency, voter knowledge of candidates and voter engagement? To date there is little evidence available to answer this question, particularly in countries where voters have limited information on candidates, where elections occur without strong media presence, and where literacy levels are low. 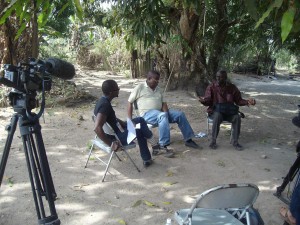 One method increasingly being used across the continent is the screening of presidential debates. This approach has just been used in Kenya for the very first time - two debates between candidates were screened on national television last month. BBC Reporters talked to a number of voters in Nairobi and Nakuru; most stated that although they had been impressed by the performance of Martha Karua, the only female presidential candidate, their voting intentions had not changed. Are debates an effective means of communicating information to voters? Can the average voter get information from video clips that enables them to predict how well politicians will perform if elected? What aspects of information revealed in debates do voters find most persuasive? And can this form of information encourage voting based on candidate quality rather than ethnic affiliations?
IPA is currently running a project in Sierra Leone that aims to help answer some of these questions. In the run-up to the 2012 elections in Sierra Leone our partner Search for Common Ground filmed debates between rival MP candidates in 14 constituencies, and screened them in 200 rural communities. Surveys of voters before and after they watched these debates measured how their perception of candidates, their knowledge of candidate positions, and their voting intentions were altered. We surveyed these voters (and a number of others) again immediately after the election, assessing their political awareness, previous voting behaviour, choices in the local and national election, and how they made their electoral choices to see if access to these debates made a difference on their knowledge or voting behaviour.
Many election-related social programs focus on logistics and informing people about the importance of voting, but as democracy becomes deeper-rooted in countries across Africa and the rest of the developing world there is also room to help people learn more about the different candidates they must choose between. Informed voting is an important prerequisite for well-functioning, accountable and transparent democracies; it’s vital that we continue to try to figure out the best ways of getting information to those heading to the ballot box.
Katie Parry is a Project Associate in Sierra Leone with IPA.
People​:
Katie Parry
Country:
Sierra Leone
Program Area:
Governance
Topics:
Community Participation, Transparency & Accountability
Partners:
Search for Common Ground, Campaign for Good Governance