The Continued Impacts of COVID-19 in Côte d'Ivoire and Burkina Faso: Lessons from Round 2 of the RECOVR Survey

IPA continues to share insights from the RECOVR multi-country panel survey, and this blog post summarizes insights related to health and COVID-19 mitigation, education, and employment and economic activity from Côte d’Ivoire and Burkina Faso. For more information, readers can also watch a recording of the webinar we recently held to highlight the results from Round 2 in West Africa. For insights from the first round, you can visit our previous blogs on Burkina Faso and Côte d’Ivoire.

Health and COVID-19 Mitigation | Understanding how respondents conceive of the risk of COVID-19, and their self-reported mitigation behaviors, over time can help decision-makers to understand if messaging or other information campaigns around protection measures need to be improved or scaled.

We asked respondents how many days a week they leave their homes, and the proportion that reported leaving their homes every day of the week nearly tripled between rounds, from 23 percent to 71 percent. Important to note, however, is that of the respondents who indicate going outside the home (or receiving visitors) at least once per week, the majority (74 percent) do so for going to and from work.  We also asked about face mask usage and found that the proportion of respondents who indicate that they always wear a facemask in public decreased by nine percentage points, from 93 percent to 82 percent. While this figure shows that self-reported mask usage is still high, among those who report not wearing masks, the proportion who believe it is not necessary (50 percent) nearly doubled from 27 percent. The snapshot of these self-reported behaviors suggests that consistent and clear public health messaging should continue, and also evolve to address changes in the public’s perceptions (e.g. thinking that masks are not necessary).

While a majority (69 percent) of respondents indicated that they would get vaccinated against COVID-19 and would also vaccinate their children, nearly one-third of respondents reported that they would decline a vaccine. When asked why they would not take the vaccine, 45 percent cited worries about its side effects while 20 percent also cited misinformation  (note that respondents could give multiple reasons, so it is likely that there is overlap between these answers). We also inquired about the top information sources and trusted outlets respondents turn to for information about the vaccines, and just over half (52 percent) responded that doctors and healthcare professionals are their top trusted source for this information.

Employment and Financial Security  | In terms of employment, a majority (81 percent) of household heads or respondents reported working in the week previous to taking the survey, around 10 percentage points more than six months prior.

A greater proportion of household heads or respondents above the country’s poverty line (86 percent) indicated working compared to those below it (76 percent). There was also a substantial gap between male and female respondents: 78 percent versus 54 percent. Such differences among the sub-groups in the survey population serve as a reminder to policymakers and practitioners that, while averages provide an important snapshot of an issue, it is critical to consider such sub-analyses to inform targeted policy responses to socioeconomic or demographic groups that may be disproportionately affected by the health and economic crisis.

The RECOVR survey also has a module on financial security, in particular, to help gauge whether respondents have access to savings or assets that can assist them in mitigating the effects of an economic shock like the pandemic. Across rounds, we saw that a majority of respondents reported that they could obtain emergency financial sources (20k FCFA2) in one month, though one in four indicated that they would find it somewhat difficult. Respondents both above the poverty line and male-identifying affirmed their ability to obtain financial sources in larger proportions than their counterparts.

Family Planning | In Burkina Faso, the RECOVR survey included a module on family planning, based on the survey co-creation process with our longstanding partner Development Media International (DMI). DMI designs engaging information campaigns, through radio and other channels, to promote evidence-based behavior change. As Dr. Abbie Clare, DMI’s Senior Research Manager, explained in the webinar, they aim to promote positive family planning behaviors in Burkina Faso amidst the pandemic.

Health and COVID-19 Mitigation | In Côte d’Ivoire, risk perceptions of COVID-19 were mostly consistent across rounds, though the proportion of respondents that considered that they or anyone in their household is at risk of contracting COVID-19 was still less than half (41 percent in Round 1 vs. 39 percent in Round 2).  In Round 2, for the 61 percent who did not feel at risk (that they or someone in their household) of contracting the virus, the majority (77 percent) cited practicing protective measures as the main factor.

Seventy-seven percent of respondents indicated that they would get the vaccine, and this does not vary significantly by poverty status (74 percent of those above the poverty threshold versus 80 percent of those below it). Self-protection was the most popular reason respondents indicated for getting vaccinated, followed by protecting one’s family. For those who stated they would not get the vaccine, misinformation figured much less prominently (5 percent) than in Burkina Faso (20 percent).

When asked what sources respondents trust the most for information about vaccines, only 36 percent indicated that doctors and other health professionals are their top source and 15 percent indicated that the Ministry of Health is their most trusted source. We also found that poorer respondents were more likely to trust religious leaders (nine percent vs. four percent), but the overall proportion of respondents that rank religious leaders as their most trusted information source is still less than 10 percent. Notably, 15 percent of respondents said that they do not trust any person or institution for vaccine information.

Education | Educational continuity amidst schooling disruptions and distance learning is a concern for the Ivorian government, as it has been for governments around the world. IPA conducted an additional qualitative study, funded by the Jacobs Foundation in the context of the Transforming Education in Cocoa Communities (TRECC) program, to gauge parent and caregiver perceptions on distance learning, and we also highlight insights from these interviews to complement RECOVR’s quantitative results.

While the survey shows that students most frequently use textbooks to continue with remote learning (48 percent of respondents indicated this), in the qualitative interviews we found that parents often have a limited view of learning, thinking it is simply memorization. However, children’s time spent studying and reviewing textbooks without more active engagement might not be very effective. Additionally, while parents and other caregivers supported the concept of educational media, beliefs varied in relation to the type of content (e.g. over radio, TV, etc.) that would best support children’s learning. 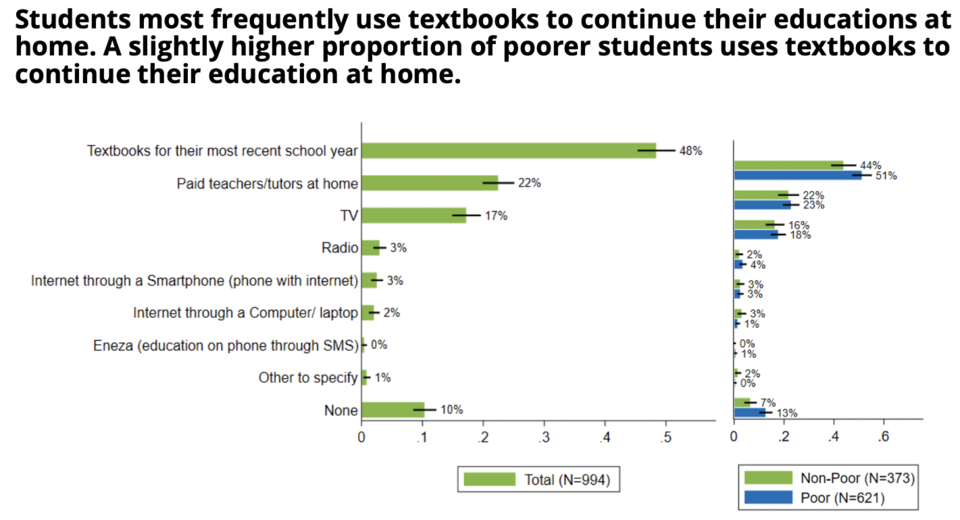 Understanding how parents and students engage with distance education offerings is an important consideration for policymakers. The qualitative interviews revealed that, of the respondents who reported that they meaningfully engaged with radio and television programs, many felt that the instruction was too fast, and it was hard for children to keep up. These findings suggest that it is important to assess how end-users (parents and learners) are interacting with educational resources and offerings to inform any future iterations or strategies to increase uptake of educational technologies.

Employment and Economic Activity | Across most measures, workers with formal contracts were likely to be working and earning more and were less likely to have challenges accessing a bank account or experiencing food insecurity. Furthermore, among businesses with more than one employee, respondents with formal employment contracts were more likely to be working during the lockdown, earning more in the past week, and having their workplaces open without interruption.

What can be learned from the above insights from the RECOVR surveys, and how can decision-makers in both countries respond accordingly? As the COVID-19 pandemic continues, applying evidence-driven approaches to inform new and ongoing measures remains a critical aspect of responsive policy-making. Below, we highlight recommendations focused on health and social protection:

Finally, we invite interested readers to attend a French-language webinar of the results dissemination on May 25. You can register for the webinar here.

2. This amount was determined based on the example of the World Bank’s Global Findex Survey, which asks respondents of their ability to come up with 1/20 of gross national income (GNI) per capita in local currency as a base amount for emergency funds.