Improving the Allocation of Land Use Subsidies in Malawi

Efficient targeting of public programs is difficult when the costs or benefits to potential recipients are unobservable. This study examined the potential of self-selection to improve allocational efficiency in the context of a program that subsidized tree planting in Malawi. After three years, participants who self-selected through an auction had more surviving trees than participants selected at random, indicating that the auction revealed information about the participants that was important for efficient targeting.

Health, environment, and poverty alleviation interventions are often designed to target recipients who will maximize the net benefits of the program. However, program designers often cannot observe the full costs or benefits to participants, which prevents them from efficiently targeting program transfers. Self-selection of beneficiaries into a program may improve allocational outcomes by allowing implementers to overcome this lack of information.

Planting trees has large public benefits—including climate change mitigation and conservation of biodiversity—but the benefits to landowners accrue slowly over time. As a result, few landholders plant and maintain trees without outside encouragement. In both developing and developed countries, an increasing number of programs therefore pay participants for making such environmentally beneficial investments, with payments totally billions of dollars annually. Self-selection may improve the allocation of these programs by helping to select individuals who will be more likely to keep the trees alive.

Malawi has experienced significant deforestation, driven by agricultural expansion, burning wood for fuel, and charcoal production. The World Agroforestry Center (ICRAF), an international research center, has sponsored various programs promoting reforestation throughout Malawi since 1986. In 2008, ICRAF partnered with the researcher to evaluate one of their reforestation programs in Central Malawi. A survey of potential participants in the region indicated that the average household owned about five acres of land and grew three different crops. Half of the households had previously planted trees on their land. The respondents were not full time farmers, as two-thirds reported seeking casual labor for income.

The study sought to determine whether self-selection into a tree-planting program could improve the efficiency of seed distribution in order to maximize the number of surviving trees over time. The reforestation program required participating farmers to plant 50 seedlings on half an acre of private land. ICRAF distributed the seedlings, trained farmers in planting and care, and monitored tree survival at regular intervals—six months, one year, two years, and three years after the start of the program. Farmers were compensated based on the number of trees that were still alive at each inspection.

At the start of the tree-planting program, ICRAF invited households owning at least one acre of land to an event to learn more about the program. The 433 households that attended were randomly assigned to one of two allocation mechanisms: an auction or a lottery.

After hearing a detailed explanation of the program and the payment structure, participants in the auction group submitted sealed bids with the lowest total price—based on the assumption that all 50 seedlings would still be alive at each inspection—that would make them willing to accept the contract. The 85 individuals with the lowest bids were ultimately enrolled in the program.

The lowest rejected bid from the auction (MWK 12,000, US$86 in 2008) was offered to the lottery group as the final contract price. Among the 204 households who agreed to participate in the program at this price, 91 were selected through the lottery.

Selecting contract recipients by auction led to a higher number of surviving trees over three years, indicating that it allocated contracts more efficiently than the lottery. Across the four rounds of monitoring, the participants who self-selected through the auction had 29.78 surviving trees, on average—3.86 (15 percent) more than those selected by lottery. This positive effect increased over time so by the final monitoring visit, the auction group had 5.24 (33 percent) more surviving trees than the lottery group. When the costs of enrollment, training, and seedlings are considered in addition to the payment for each tree, the higher survival rate among the auction group resulted in significant cost savings for the implementing organization. The cost to the organization per surviving tree was US$8.44 in the auction group, US$2.51 less than in the lottery group.

In order to compare self-selection with targeting farmers on observable characteristics, Jack ran a simulation with baseline household data. The simulation showed that targeting on observables can also select farmers who will have better tree survival outcomes, but not as well as self-selection. Furthermore, collecting the amount of household information needed to implement a targeting rule may be very costly or logistically difficult. Self-selection may therefore be a more practical way for implementers to choose participants who will maximize the benefits of a program. 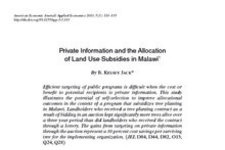 Private Information and the Allocation of Land Use Subsidies in Malawi 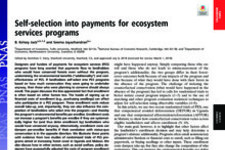