Many adults over age 65 across the world live in extreme poverty, however only 20 percent of seniors worldwide receive any form of pension. Non-contributory pension programs for seniors living below a certain income threshold may improve food consumption, mental health, and lower reliance on younger family members for economic support. In Peru, researchers conducted a regression discontinuity analysis of the impact of the Pensión 65 program on health, paid work, household consumption and other family members. The program was found to increase monthly household consumption for beneficiaries by 40 percent.

Across the world, many seniors live in extreme poverty. Evidence from several studies suggests that non-contributory pension programs, which provide regular pensions to seniors living below a certain income threshold, are vital social protection programs for people who have retired. These programs may have a wide range of positive effects, including improved household food consumption and mental health, and a lower level of reliance on younger family members for economic support. However, only about 20 percent of seniors worldwide receive any form of pension,1 and those who do often receive them at inadequate levels.2 In many Latin American countries, pension programs comprise a significant portion of social spending by governments.

In Peru, citizens over the age of 65 living in extreme poverty are eligible for a program called Pension 65. Eligibility for the program is determined by whether an individual's poverty score is below the level of extreme poverty as defined by el Sistema de Focalización de Hogares' (SISFOH) scoring system. The program, instituted in October 2011, makes bimonthly payments of 250 Sol (approximately USD $78) to all citizens who qualify. These citizens also receive free public health services and are eligible for a publicly-funded health insurance program. In 2015, the program had a budget of around 758 million soles and reached approximately 500,000 beneficiaries across Peru’s 1,854 districts.

Note: This project was not a randomized controlled trial.

Researchers worked with IPA to implement a regression discontinuity analysis of the effects of the Pension 65 program on beneficiaries’ welfare. The evaluation comprised two groups: one group of households that received pensions through the program, and one made up of households that barely did not make the cut off for inclusion in the progam, and served as the comparison group. Households chosen to participate in the evaluation (in the program and comparison group) all fell within a small range of poverty levels (within 0.3 standard deviations from the threshold in either direction), so those who were eligible to receive the pension had similar characteristics to those who were not.

Peru’s National Institute of Statistics and Informatics conducted two surveys for this evaluation. The initial survey was conducted in late 2012, while the concluding survey was conducted in the middle of 2015. The surveys measured a range of outcomes in the areas of labor participation from household members, physical and mental health, and consumption levels.

Results suggest that beneficiaries used part of their pensions to finance increases in household consumption, and the remainder substituted income they would otherwise have received for paid work. Overall, the program improved beneficiaries’ mental health (but not physical health), increased their levels of food consumption, and led them to reduce their hours worked.

Effects on income and consumption: Households with a pension beneficiary had a level of consumption that was about 40 percent higher than those without. Beneficiaries allocated about two thirds of this increase to increased food consumption.

Effects on paid work: Beneficiaries of the program significantly reduced their paid work, with beneficiaries doing about nine percent less work for pay out of necessity than their counterparts.

Effects on other family members and households: No effects were found on school enrollment. The proportion of households with elderly members who made transfers to other members increased from 46 percent to 61 percent.

Although Pension 65 is focused on seniors’ economic security, this study also shows that receiving a pension may improve emotional health for the elderly and increase per capita household consumption, which could become channels to reduce extreme poverty.

A Spanish-language report on this study's results is available at the Government of Peru's website. 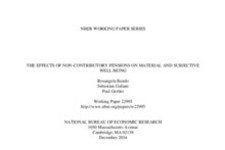