The Impact of Savings Groups on the Lives of the Rural Poor in Ghana, Malawi, and Uganda

Village Savings and Loans Associations (VSLAs) are thought to play a critical role in bringing financial services to rural areas of developing countries, where access to formal financial services is typically very limited. However, evidence on the impact of these groups has been sparse. In Ghana, Malawi, and Uganda, Innovations for Poverty Action worked with researchers and CARE to rigorously evaluate the impact of VSLAs on rural households. Overall, the promotion of the groups led to an improvement in financial inclusion, household business outcomes, and women’s empowerment. There was also evidence of improved resilience: in villages affected by drought, households experienced improved food security and income. However, researchers did not find evidence of impacts on average consumption or other welfare outcomes.

While financial institutions and digital financial service providers continue to increase the reach of formal financial services, offering such services to the rural poor is costly and a great number of them remain unbanked. Without formal financial services such as credit and savings products it can be difficult for the rural poor to afford major expenses, invest in their farms or businesses, and pay for unexpected events like illnesses or funerals. Traditional community saving methods, such as rotating savings and credit associations (ROSCAs), are popular and provide an opportunity to save, but they have limited flexibility and functionality since this model does not allow savers to earn interest or borrow money. Village Savings and Loan Associations (VSLAs) build on the ROSCA model to create groups of people (often women) who pool their savings to have a source of lending funds: members make savings contributions to the pool and can also borrow from it. VSLAs are thought to play a critical role in bringing access to financial services to rural areas, but there is limited rigorous evidence on their impact. Researchers conducted three evaluations in Ghana, Malawi, and Uganda to evaluate how VSLAs impact rural households’ financial well-being and women’s empowerment.

CARE, an international NGO and one of the leading promoters of the VSLA model, served as the main partner for this evaluation. This research took place in rural areas of Ghana, Malawi, and Uganda, where access to formal financial services remains limited in spite of the recent growth of digital financial services; bank account ownership is 40 percent, 18 percent, and 44 percent, respectively. Across all study sites, the average village consisted of around 800 residents and was an approximately three hours’ walk from the closest paved road. Households were composed of about six people on average, with nearly all engaging in agricultural activities and one out of four running businesses, as well.

In these rural contexts, access to a suite of financial services through VSLAs is thought to help households weather shocks, set aside resources for the lean season, and invest in their farms and other income generating activities. The program’s focus on women and their financial inclusion is also thought to support household empowerment and economic activity.

In Ghana, Malawi and Uganda, researchers partnered with CARE and 13 local NGOs to evaluate the impact of VSLAs on households’ usage of financial services, business activity, income, empowerment, consumption, and the ability to cope with unexpected events such as droughts. Researchers randomly assigned around half of the 561 clusters of villages to the treatment group and half to a comparison group. Across the three countries, 15,221 households participated in the study.

In treatment villages, a representative from CARE or one of its partners met with village leaders, conducted promotional activities, and facilitated the formation of VSLAs. Interested participants (mostly women) formed groups of 19 to 30 members, pooling money to create a fund from which members could borrow. With rates determined at the group’s founding, members pay back loans with interest, thus allowing members to also earn a return on their savings. In addition, most VSLAs included a social or solidarity fund managed by the group to help members in need through interest-free loans or cash grants in case of emergency. While the representatives from CARE and its implementing partners supported the formation of new VSLAs, in Malawi and Uganda the program also aimed to train local agents to continue forming new groups beyond the duration and reach of the program.

Between 22 and 30 months after the first VSLA groups were formed in each country, Innovations for Poverty Action conducted endline surveys to evaluate their impact.

Results and Policy Lessons
Across all three countries, access to VSLAs led to increased savings and credit access, improved microenterprise outcomes, and increased women’s empowerment. However, VSLAs did not lead to improvements in households' financial well-being.
Take-up: Take-up rates at the end of the study averaged 32 percent across the three sites with a steady increase over time as new groups were continuously formed during the evaluation period. Weekly median savings contributions were under US$1 across the study, and at the time of the endline survey, 61 percent of members had completed at least one savings cycle, receiving their savings and interest share-outs. Sixty-eight percent of members had received at least one loan from the group, paying with a median interest rate of 10 percent with a term generally ranging between one and three months. In Malawi and Uganda, program replication was successful with 14 percent and 30 percent of households, respectively, joining VSLAs in non-targeted communities in within the program clusters.
Financial Inclusion: VSLAs led to significant improvements in financial inclusion among female respondents. Total reported savings grew by US$14 (PPP, 2011), a 34% increase relative to the comparison group. The program also affected access to credit: 42 percent of treatment group women obtained a loan in the year leading up to the endline survey, 11 percentage points greater than the comparison group. The average amount borrowed in one year was US$6.60 (PPP, 2011) higher than in comparison communities.
Coping with Drought: Food security for households in both program and comparison communities were negatively affected by drought during the study period. While we don’t find general impacts of VSLA on food security, we find that the program helps households to effectively offset the negative shock due to drought.  Results on income follow the same pattern, with income for households facing a drought increasing significantly compared to their peers in comparison areas.
Business Outcomes: Microenterprise activities are positively affected by the program, leading to a 6 percent increase in the number of businesses operated by households in program areas, and a 9 percent increase in the duration of mostly short-term seasonal business activities.
Women’s empowerment: Women’s empowerment also increased markedly, as measured by a set of questions for women on their influence over household decisions. The program led to a 4 percentage point improvement in the share of women who reported having a high degree of control over household business decisions and food expenses, as well as a 3 and 2 percentage point increase in women who said they had influence on education and children’s health-related expenses, respectively.
Cost: Researchers estimate the average cost of the program per household in treatment villages was $7.01 in Malawi and $10.85 Uganda. Data on program cost was not available for Ghana. 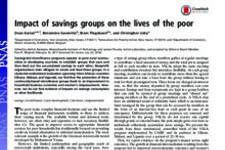 Impact of savings groups on the lives of the poor