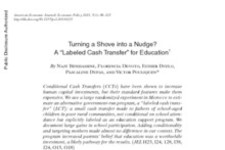 Turning a Shove into a Nudge? A “Labeled Cash Transfer” for Education