Campaigns Against Vote-Selling in the Philippines: Do Promises Work?

Vote-buying and vote-selling obstruct the democratic process, yet they remain pervasive in many developing democracies. Researchers asked voters in the Philippines to make a simple, unenforceable promise not to accept money from politicians or to promise to vote according to their conscience, even if they do accept money, to test the impact of promises on voters’ behavior. A majority of respondents made promises not to sell their votes. Researchers found that the promise significantly reduced vote-selling, cutting the number of people who sold their votes by 11 percentage points in the smallest-stakes election, but was not effective in the mayoral election with higher pay-outs. These results suggest that simply asking voters to promise not to sell votes can help reduce vote-selling in elections where vote-buying payments are typically small.

Vote-buying and vote-selling obstruct the democratic process, yet they remain pervasive in many developing democracies. In response, governments, international donors, and NGOs worldwide have directed significant attention and resources towards curbing vote-buying and vote-selling. Some strategies have aimed to stop politicians from offering money in exchange for votes, but this approach has often failed due to poor implementation and weak enforcement. Therefore, it has become common to focus anti-vote-buying efforts on voters themselves. This often involves asking voters to make promises or sign pledges to not accept money from politicians or their agents prior to elections. Another approach encourages voters to take the money being offered, but still “vote their conscience.” This evaluation aims to shed light on the impact of these two types of anti-vote-selling campaigns.

The Philippines is an electoral democracy, but corruption and a lack of transparency continue to undermine democratic development. Elections have historically been marred by fraud, intimidation, and political violence.1 While vote-buying and selling has decreased in recent years, it is estimated that about 30 percent of Filipinos were offered money by a politician or local leader during the 2010 election campaign.

Vote-buying is widespread in Sorsogon City, where this study took place. Most vote-buying in Sorsogon City occurs in the week leading up to election day. Candidate representatives approach households directly, offering money or goods in exchange for their vote. The size of payments differed differs greatly across races. In the mayoral races, payments per voter typically amounted to 250 to 500 Philippine pesos (US$5.57-$11.14), while those for city council races were in the range of 20 to 100 pesos (US$0.45-$2.23).

To evaluate how making promises impacts voters’ willingness to sell their votes, researchers partnered with IPA to conduct a randomized evaluation with 900 registered voters in Sorsogon City, the Philippines around municipal elections.

Before the municipal elections, all respondents were shown a three-minute video clip on a hand-held device. The video clip was part of a voter education campaign that used humor to encourage viewers to turn out to vote, vote for honest and competent candidates, and avoid vote-selling.2 All respondents were then asked to rank political candidates, indicating for whom they wanted to vote in the upcoming elections, and randomly assigned to one of three groups:

1.     Don't Take Money group: After watching the video, respondents were asked to make a promise not to take money from politicians.

2.     Vote Your Conscience group: After watching the video, respondents were asked to vote according to their conscience, even if they take money from politicians.

3.     Comparison group: These respondents only watched the video.

Following the elections, respondents were surveyed again.  Due to concerns respondents would misreport their true voting behavior, respondents were not asked directly if they had sold their votes. Instead, surveyors asked who they had voted for, and then compared their responses to those in the initial survey. Researchers used vote-switching as a proxy for vote-selling.

Overall, a majority of respondents made promises not to sell their votes. Among those who made promises in the city council race, where payments for votes are low, vote-selling decreased by 11 percentage points. However, in the mayoral race, where payments are higher, there was no change in vote-selling or vote-switching. This suggests that promises are not enough to make people feel committed to not accept large cash payments in exchange for voting one way or another.

Telling voters that they could accept money but should still vote according to their conscience did not reduce vote-selling in either race—in fact, it increased vote-selling. In the comparison group, 57 percent of respondents switched their vote at least once, compared to 50 percent in the promise group, and 62 percent in the conscience group (in both races).

These results suggest that simple interventions—such as asking voters to promise not to sell their vote—can help reduce vote-selling in small stakes elections where payments for votes are small. These results also suggest that telling voters they can accept money but should still vote according to their conscience may be counterproductive. 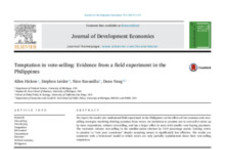 Temptation in Vote-Selling: Evidence from a Field Experiment in the Philippines