Benchmarking a WASH and Nutrition Program to Cash in Rwanda

How do standard development programs compare to just giving people cash? In Rwanda, an IPA research team rigorously evaluated the impact of unconditional cash transfers,1 compared to an integrated nutrition and WASH program, on the following main outcomes: household dietary diversity, child and maternal anemia, child growth (height-for-age, weight-for-age, mid-upper arm circumference), value of household wealth, and household consumption. After approximately one year,2 the nutrition and WASH program had a positive impact on savings, a secondary outcome, but did not impact any main outcomes. An equivalent amount of cash (a cost to USAID of $142 per household with $114 being transferred) allowed households to pay down debt and boosted productive and consumption asset investment, but had no impact on child health indicators.  A much larger cash transfer—of more than $500 per household—had a wide range of benefits: it not only increased consumption, house values, savings, and assets, but improved household dietary diversity and height-for-age, and decreased child mortality.

The first 1,000 days of life comprise a critical period of physical and cognitive development. Children who experience normal physical growth and development during this period complete more schooling, have better cognitive ability, and earn higher wages as adults.3 On the other hand, inadequate nutrition during this period can cause stunting and contribute to long-term developmental consequences that affect future productivity and well-being.

In many, particularly rural, areas of low-income countries, many children do not receive adequate nutrition, and diarrheal disease from unsafe water and inadequate hygiene is common. According to UNICEF, nearly half of all deaths in children under 5 are attributable to undernutrition, translating into the loss of about 3 million young lives a year.4

But what is the most effective and scalable way to address these challenges? Existing standards of practice suggest that intensive multi-faceted programming can be effective by addressing multiple challenges at once, on the supply and demand side, with nutrition and water, sanitation, and hygiene (WASH) interventions.

Another possible way may be through cash grants. Recent research has found that providing cash grants to the poor, without conditions on how the money can be spent, can have important welfare benefits for recipients, including significant increases in income, assets, psychological wellbeing, and women’s empowerment, and overhead on cash grants is relatively low. However, little research exists on the relative impact and cost-effectiveness of unconditional cash transfers compared to the standard approach of offering services, goods and/or training, especially in improving nutrition and health outcomes among vulnerable populations. This study set cash grants as a “benchmark” for a nutrition and WASH program and was designed to provide evidence on the relative cost-effectiveness of these approaches.

Rwanda has seen improvements in child nutrition in recent years, but significant challenges remain: 37 percent of children are anemic and 38 percent of children under age 5 are stunted, according to a 2014-2015 national report.5 Malnutrition rates are much higher in rural areas than in urban areas. To combat these challenges, the Government of Rwanda set ambitious targets for reducing malnutrition among children and women of childbearing age by 2018.

Integrated Nutrition and WASH program: Gikuriro, meaning ‘well- growing child’ in Kinyarwanda, is an integrated nutrition and WASH program implemented over five years (with the majority of program benefits rolled out in the first year), administered by Catholic Relief Services, in consortium with the Netherlands Development Organization, SNV, and funded by USAID.

The program aims to promote better nutrition and health in communities through a variety of behavior change activities, including village nutrition schools, community health clubs, growth monitoring and promotion by trained community health workers, and access to improved latrines and hand-washing facilities. In addition, it aims to build livelihoods through Farmer Field Schools and the distribution of seeds and livestock, as well as Savings and Internal Lending Communities. Finally it provides nutrition- and WASH-related capacity development and training to Government of Rwanda district employees and health workers.

Unconditional cash grants: GiveDirectly delivers cash transfers, typically with no conditions on how the money can be spent, to eligible households via mobile money. In this case, some households received a cash grant sized to the anticipated cost of the Gikuriro program, which  was substantially lower than the transfer size used by GiveDirectly in other programs.6 Other households received a larger transfer, which was sized to be as cost-effective as possible given the costs of administering cash transfers (see ‘Evaluation’ below for details). The cash transfers were funded by USAID and Google.org.

Because of the nutritional focus of the Gikuriro intervention, GiveDirectly incorporated a ‘nudge’ into the way the program was introduced, providing recipients of the transfers with a low-cost flyer with information on infant nutrition and its importance.

Both programs were administered to nutritionally vulnerable households, specifically to families with at least one child under five who was malnourished (determined using the Rwandan Ministry of Health standards for malnutrition), and to poor households with children or pregnant or nursing mothers.

Two hundred and forty-eight villages were randomly assigned to one of three groups:

While the exact cost of Gikuriro ($142) was not known prior to implementation, this experimental allocation of different cash amounts enabled researchers to make an exact cost-equivalent comparison of impacts.

3. Comparison group: Eligible households in these villages received neither intervention during the study period. (74 villages)

In addition to the main outcomes described above, researchers also measured impacts on borrowing and savings, fertility, health knowledge, sanitation practices, diseases and mortality, household assets, and quality of housing.

After approximately one year:

Overall, neither Gikuriro nor the cost-equivalent cash transfer had an impact on any of the primary outcomes (child growth, household dietary diversity, maternal or child anemia, household consumption, or wealth) within the period of the study. Gikuriro did have a positive impact on savings among eligibles, a secondary outcome, and cost-equivalent cash had a positive impact on productive assets and consumption assets, also secondary outcomes. The much larger cash transfer led to improvements in consumption, dietary diversity, height-for-age, child mortality, savings, assets and house values. Impacts on specific outcomes are described below.7

Maternal and child anemia: None of the interventions affected child or maternal anemia.

Wealth: None of the interventions impacted household wealth.

When comparing the two groups with the same exact cost to each other (rather than to the comparison group), there were significant differences in the use of savings and borrowing; when given free choice, the individuals in the cash group paid down debt, while the nutrition and WASH program induced households to save more (a focus of the savings groups). The cost-equivalent cash was significantly more effective at driving the stock of consumption assets and productive assets.

Watch the researchers and IPA present on the cash benchmarking study in this IPA webcast.

The study featured in this summary was made possible by the generous support of the American people through the United States Agency for International Development (USAID). The contents of this brief are the responsibility of Innovations for Poverty Action and do not necessarily reflect the views of USAID or the United States Government. 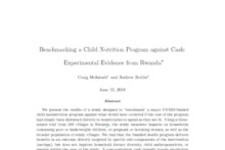 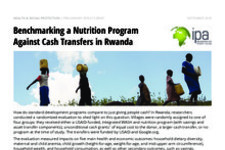 Benchmarking a Nutrition Program Against Cash Transfers in Rwanda