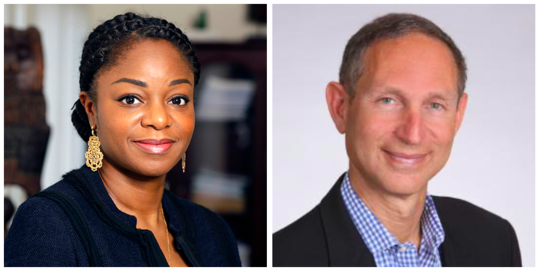 Cina Lawson (left) and Russell Siegelman (right) are the newest members of IPA's board of directors.

IPA is pleased to welcome Minister Cina Lawson and Russell Siegelman to its board of directors. They will join the current board members in overseeing IPA’s operations and charting the path forward as the organization continues to grow the evidence base in development and help governments use that evidence to create effective policies that improve lives.

Cina Lawson is Minister of Digital Economy and Transformation of Togo. She brings a wealth of experience, from the World Bank, the telecom industry, and government. In her current role, she worked with IPA and other global partners to respond to COVID-19’s economic impact in Togo, quickly harnessing algorithms and SMS-based screening to identify informal workers who’d lost income and were in need of help. The NOVISSI program reached more than 920,000 such informal workers and distributed the equivalent of $34 million US to them. “I am honored to be joining the board of IPA, especially at this critical time,” Minister Lawson explained. “The world is facing unprecedented challenges, but we’ve also never been more equipped to make smart, data-driven decisions. IPA has been at the forefront of the evidence-based policy movement and the partnership-based model of working with the government offers enormous potential for scalable impact. I am pleased to be able to be a part of it.”

Russell Siegelman returns to IPA’s board, having previously served in 2012-2014. He has many years of experience bringing new ideas to fruition in both the technology and non-profit sectors. Previously he was a Vice President at Microsoft, and a General Partner at the venture capital firm Kleiner Perkins Caufield & Byers investing in early-stage technology companies and now teaches entrepreneurship and impact entrepreneurship at the Stanford Graduate School of Business. He brings extensive experience in the development sector, having served on the board of the Global Innovation Fund, the advisory board for USAID’s Development Innovation Ventures, and several other non-profits and foundations.

Having seen organizations in a range of stages, Siegelman is looking forward to helping IPA further its mission of scaling data and evidence use to improve people’s lives. “As its name suggests, innovation is at the core of IPA. In the past few years, the organization has executed rigorous evaluations in important new areas like crime-fighting, peace, and economic recovery in low- and middle-income countries. Most recently it has launched the first of its kind initiative to spur rigorous research into combating human trafficking. But best-in-class evaluation execution capacity is not enough. IPA’s raison-d’etre is taking the evidence discovered from evaluations and translating it into policy and practices that make the world a better place for the poorest and most in-need people. I look forward to working with the incredible staff of this organization and board to refine and grow this work. Having seen IPA develop over the years, I’m very excited for what’s next.”